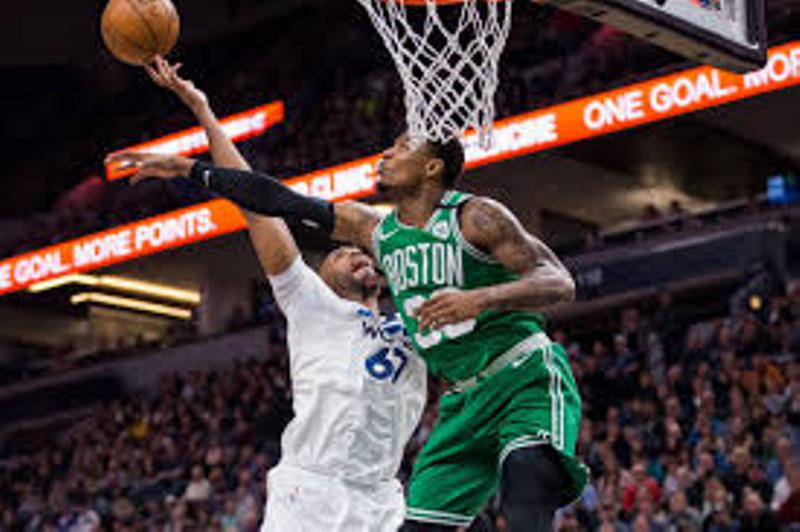 The Boston Celtics shook off a scary fall for swingman Jaylen Brown to punch their ticket to the NBA playoffs with a 117-109 victory over the Minnesota Timberwolves on Thursday.

Kyrie Irving, back from a one-game absence with a sore knee, scored 23 points with eight assists and seven rebounds and Al Horford added 20 points, eight rebounds and six assists as the Celtics won for the sixth time in seven games.

They remained two games behind Eastern Conference leaders Toronto — who booked their playoff berth on Wednesday.

The Celtics led by as many as 18 points early in the third quarter. But they got a jolt with 1:31 left in the third when Brown drove for a dunk and upon letting go of the rim fell hard on his shoulders, neck and head.

He lay on the court for several minutes as medical staff attended to him and the Timberwolves’ Target Center arena went quiet.

When he finally rose from the floor — passing on the stretcher that had been rolled out — fans stood and cheered.

“I was right there,” Horford said of Brown’s fall. “It was tough to see. I was just happy he was able to get up and walk off because that was one of the worst falls I’ve seen.”

Teammate Marcus Smart said he was terrified when he saw Brown fall.

But Celtics coach Brad Stevens said after the game that Brown “felt pretty good” as he left the arena for the hospital, where he was to undergo a CT scan.

Leading 86-74 after three quarters, the Celtics managed to repel the Timberwolves’ rally bid.

Minnesota pulled within five points at 88-83 with 9:12 left in the fourth, but would get no closer.

Nemanja Bjelica led the Timberwolves with a career-high 30 points, including six of nine from the three-point range. He added 12 rebounds, but it wasn’t enough for a Timberwolves team without injured All-Star Jimmy Butler.

For Boston it marks the earliest in a season that they’ve clinched a playoff berth since 2011.

Irving said they wouldn’t let up as they “prepare for something bigger than ourselves”.

“We’ve just got to take advantage of the moments, continue to get better every game and utilize these games to really play our best,” he said.

The Miami Heat, battling for playoff position in the East, earned a valuable 108-99 victory over Philadelphia, moving within one game of the 76ers for sixth place in the East.

Hassan Whiteside led the Heat with 26 points and eight rebounds. Dwyane Wade, who delivered the game-winner in the Heat’s 102-101 victory over the Sixers on February 27, added 16.

In Oklahoma City, Russell Westbrook scored 27 points with nine assists and eight rebounds to lead Thunder to a 115-87 victory over the Phoenix Suns.

Shooting guard Corey Brewer, acquired last week after he was waived by the Los Angeles Lakers, got the starting nod and provided 17 points as the Thunder posted their first double-digit victory since February 11. – Agence France-Presse