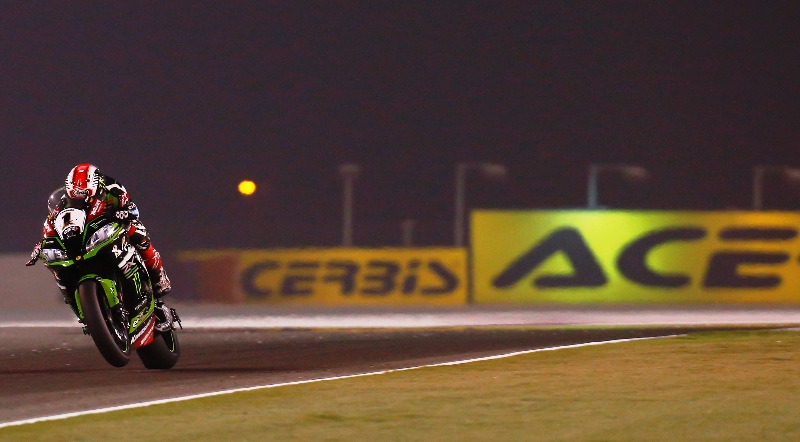 At the conclusion of the first day of WorldSBK action at the Acerbis Qatar Round Jonathan Rea (Kawasaki Racing Team) sat at the top of the combined FP1 and FP2 timesheets with a 1’57.666 lap of the spectacular floodlit Losail International Circuit.

The Northern Irishman’s best time on Thursday came in the earlier of the opening two practice sessions at the final round of the season as he sped around the desert track on his Kawasaki ZX-10RR and finished FP1 a 0.689s margin ahead of his closest rival and teammate Tom Sykes (Kawasaki Racing Team).

Rea was unable to improve in FP2 and Alex Lowes (Pata Yamaha Official WorldSBK Team) closed the gap at the top of the combined timesheets to 0.259s as the fastest man in that session and the second quickest overall on Thursday. FP2 was interrupted briefly after a technical problem at turn 10 for the day’s third best overall performer Sykes – which led to a red flag – but the riders were soon back in action after the track conditions were confirmed as safe for them to continue riding.

Chaz Davies (Aruba.it Racing – Ducati) was fourth quickest and Michael van der Mark (Pata Yamaha Official WorldSBK Team) also featured in the top five. At this season-concluding round in Qatar Sykes and Davies will battle it out for the runners-up position in this year’s championship behind title winner Rea.