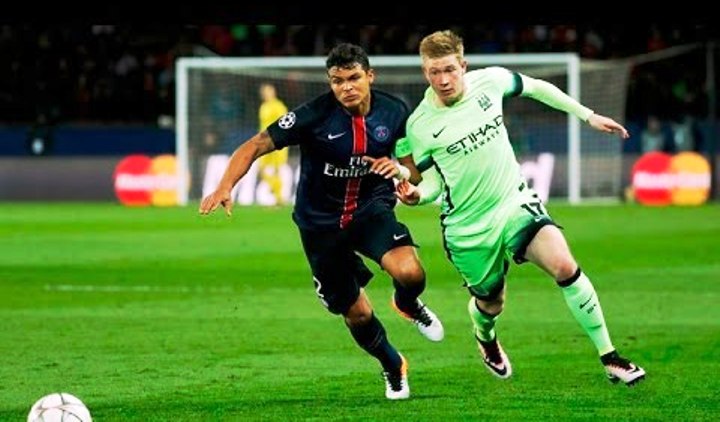 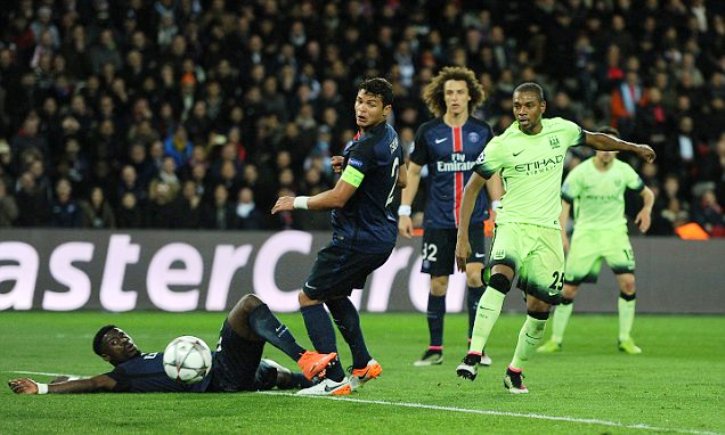 Away goals by Kevin De Bruyne and Fernandinho handed Manchester City a 2-2 first-leg draw at Paris Saint-Germain on Wednesday to give the English side the edge in their Champions League quarter-final tie.

On a night that will be remembered for some comical defending and a Zlatan Ibrahimovic penalty that was saved by City goalkeeper Joe Hart, the Premier League side twice punished mistakes by their hosts.

De Bruyne put City ahead on 38 minutes, only for Ibrahimovic to level after an embarrassing mix-up in the visitors’ defence soon after.

Adrien Rabiot then put PSG ahead just before the hour, but Fernandinho made it 2-2 on 72 minutes and ensured the French giants will be chasing the tie in next Tuesday’s second leg.

“It was a crazy game and we played our part in a great game of football,” Hart told BT Sport.

“It’s up to us to make the away goals count. We are making history for the club and we don’t want it to end.”

Meanwhile, PSG coach Laurent Blanc admitted his side will have to improve if they are to progress now.

“Two mistakes allowed Man City to score goals that are, as you know, very important away from home. That’s our biggest regret,” he said.

“I think we conceded goals from the only two chances they had but we could have scored three or four ourselves.”

City were appearing at this stage for the first time and were handicapped by the absences of injured captain Vincent Kompany, Yaya Toure and Raheem Sterling.

However, Hart had recovered from injury in time to play and De Bruyne started after making his own comeback from two months on the sidelines at the weekend, giving the English side’s attack a fearsome look.

PSG, conquerors of Chelsea in the last 16, feared Sergio Aguero the most, though, and the Argentinian striker coaxed a yellow card out of David Luiz inside 20 seconds after getting in behind the Brazilian.

The home support were furious soon after when Serbian referee Milorad Mazic refused to give Paris a penalty after Blaise Matuidi went down in the box under pressure from Eliaquim Mangala, but PSG did win a spot-kick in the 13th minute for a foul by Bacary Sagna on Luiz.

Ibrahimovic stepped up, but was thwarted by Hart, who dived low to his right to make the save.

Perhaps the 34-year-old Swede was feeling the pressure in what could be his last chance to win the Champions League, because he passed up another huge opportunity midway through the first half, blazing over after a Thiago Motta pass split the away defence.

City made Ibrahimovic pay as they opened the scoring seven minutes before half-time, capitalising on loose play in the Paris midfield.

Fernandinho intercepted a Matuidi pass intended for Rabiot and advanced towards the edge of the box before teeing up De Bruyne, who took a touch and fired past Kevin Trapp.

However, City inexplicably gifted the French champions an equaliser only three minutes later.

It was a horror moment for Hart and Fernando, with the goalkeeper choosing to play a goal-kick short to the Brazilian-born midfielder on the edge of the area despite Ibrahimovic lurking in close proximity.

Fernando tried to release the ball, but Ibrahimovic stuck out a leg and diverted it into the net for his 39th goal of the season.

PSG came out in the second half with the momentum after that and they took the lead on 59 minutes thanks to one-time City youth player Rabiot.

Edinson Cavani turned a corner towards goal and Hart saved, but the ball fell kindly for Rabiot to tap in.

PSG sensed a chance to increase their advantage and a Di Maria cross from the right was headed against the woodwork by Ibrahimovic.

Instead City pounced on some more comical defending to grab a second away goal, Fernandinho gleefully prodding into the net after neither Serge Aurier nor Thiago Silva were able to clear a low ball into the box from the away right.

Those away goals, and the fact PSG will be without the suspended Luiz and Matuidi for the return, could prove crucial. – Agence France-Presse