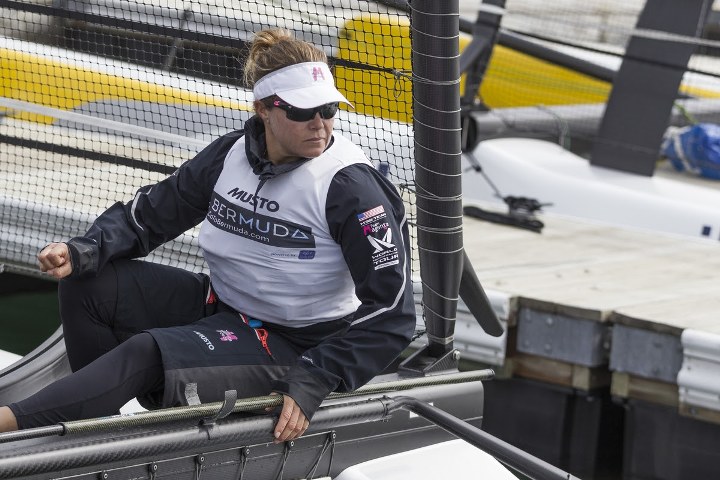 Never before has the World Match Racing Tour attracted such a diverse set of sailors as in 2016. While the Tour has continued to draw in the match racing specialists such as Taylor Canfield, Ian Williams, Bjorn Hansen and many others besides, it’s been interesting to watch some big names enter this branch of the sport for the very first time. Next week they’re about to compete in the World Match Racing Tour Finals in Marstrand, Sweden.

Before Yann Guichard showed up for duty in Fremantle for the first event in M32 catamarans, the last sailing he had done was as skipper of Spindrift 2, the 40-metre giant trimaran, in an attempt to win the Jules Verne Trophy for being the fastest sail-powered vessel around the world. While the weather on the final charge up the Atlantic prevented Guichard’s crew from breaking the record, they still flew around the planet in an impressive time of 47 days and 10 hours at an average speed 25.3 knots over 28,875 miles.

So shifting from a 45-day non-stop marathon to the short-course racing of the World Match Racing Tour where races can last as little as 8 minutes – that’s quite a switch. It’s akin to watching a marathon runner have a go at the 100-metre sprint. You could argue that the difference between the two sailing disciplines is even more extreme than that, although Guichard says the similarity comes in the level of focus required. “Whether you are sailing for days at a time on Spindrift or racing for a few minutes on the M32, you must concentrate all the time. You can never lose focus,” he says.

Guichard has raced all kinds of multihull of all sizes at the very highest level, from 20ft Tornado Olympic catamarans up to the mighty Spindrift 2. While the Frenchman is one of the most experienced racers on the Tour with perhaps the most diverse CV, this year’s Tour has also attracted a number of young guns in their early to mid-20s who are looking to make their way as professional sailors. The first event in Fremantle took place on the doorstep of one of Australia’s most active racing scenes, with a number of local young sailors keen to see if they were able to put up a fight against the more experienced international visitors.

It turns out that the young Aussies and Kiwis with a background in skiff racing – in high-speed dinghies like the 29er and 49er – have proven very well adapted to the demands of the M32. At just 500kg, the M32 is quick to accelerate, responds to even the smallest gusts and lulls on the race course, and requires lightning-quick reactions by the skipper and perfect choreography from the crew if they’re to execute the manoeuvres successfully.

Steve Thomas, a former 29er World Champion from Perth, typifies this new breed of skiff racer, although there are a number of other young Aussies that have shown the ability to scare the more experienced pros, including Evan Walker, Murray Jones, Matt Jerwood and Sam Gilmour. All of these skippers were so enthused by their first foray into M32 racing back, which took place on Fremantle’s spectacular Bather’s Bay back in March, that all of them have since gone on to compete on other Tour events around the world.

And having qualified among the top 20 teams during the season, all will start next week as contenders for the $1 million prize money that goes to the winner of the World Match Racing Tour Finals.

Gilmour is son of one of the all-time match racing greats, Peter Gilmour, who won in Marstrand on eight occasions. No doubt the younger Gilmour will have been badgering his dad for all his insider tips on this notoriously tricky venue, although Peter did his winning in the DS37 keelboats. At approximately four times the speed of the DS37, the M32 is a much faster beast and the tactical priorities are very different, so Sam will need to work out his own approach to Marstrand this year. The young Gilmour has certainly shown glimpses of potential, not least when he won his first ever M32 match race against the reigning and six-time World Champion Ian Williams.

Sally Barkow brings a wealth of experience from a very diverse background that includes competing at the Olympic Games and in last year’s Volvo Ocean Race. She has brought together some of the most talented female sailors to race on board Team Magenta 32. Not only has the American shown herself to have the measure of her male rivals, not least when she came within a boatlength of eliminating Taylor Canfield from the event in Copenhagen, Barkow has cleverly used the Tour and the M32 as a marketing and promotional platform for building the profile of women’s professional sailing and for encouraging new blood into the sport. For that reason, among many others, Team Magenta 32 has a huge following on social media.

In his early 20s, Chris Steele has been working hard on building his ranking on the match racing circuit, but was very much a keelboat specialist. With no previous background in multihull racing, the young Kiwi has been studying the racing closely this year to try to get up to speed as quickly and effectively as possible with the M32.

The prospect of $1 million adds a further level of pressure to the final event in Marstrand, but one that he could profit from if he handles the pressure better than his rivals. “This amount of money up for grabs is unprecedented,” he says. “I think it’s going to be massively different in terms of the attitude that some people bring to the racing. You could see the dark side of some teams, because there’s so much at stake.

The second-placed team will win $22,000, but the winner will get $33,000, plus the $1 million bonus. For us, it’s a life-changing amount of money. It’s the difference between ‘how are we going to pay for our flights?’ to ‘Right, let’s buy ourselves our own M32 and go full-time training’. And we’ve seen in the racing this season that, on their day, anyone can beat anyone. The game is wide open.”