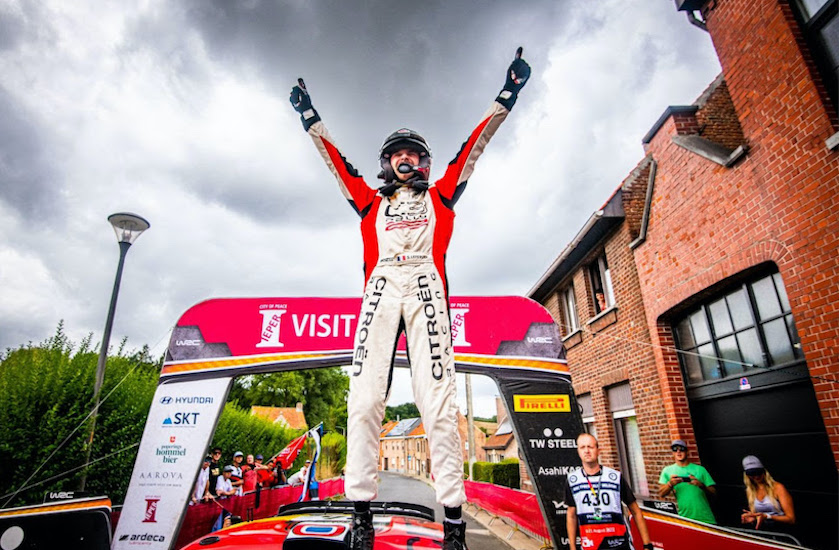 Seven Citroën C3 Rally2s lined up at the start of Ypres Rally Belgium, round nine of the 2022 WRC. At their home event, the DG Sport team went big, entering five C3 Rally2s with Stéphane Lefebvre and Andy Malfoy as the leading crew.

Currently top of the Belgian Rally Championship standings, Stéphane Lefebvre was looking to use Ypres Rally Belgium to extend his lead whilst also testing himself against the leaders in the WRC2. The C3 Rally2 driver grabbed the WRC2 lead on SS2.

From that point onwards, the French driver showed his pace and native-like knowledge of the Belgian roads to gradually extend his advantage over his rivals. Brimming with confidence, Lefebvre made use of the full potential of the C3 Rally2 on roads he knows well to secure his first win of the season in the WRC2, whilst also strengthening his grip on the lead of the Belgian Rally Championship.

Meanwhile, Yohan Rossel and Valentin Sarreaud, winners in Croatia and Portugal, were back competing against their rivals for the WRC2 title. The PH Sport team’s C3 Rally2 crew quickly established themselves among the frontrunners before then challenging for victory. Rossel dropped time on SS4 after heavy rainfall made conditions tricky, but he stayed in contention for a podium spot.

The Frenchman went on to produce a solid performance, successfully negotiating the tricky Belgian roads that caught out many others. He thus enjoyed a good haul of points for finishing in third place in class and also from placing second in the Power Stage.

Winner of the 208 Rally Cup Iberica in 2021, Alejandro Cachon was rewarded with a programme this season in S-CER in a C3 Rally2. Cachon started Ypres Rally Belgium, his first appearance at a WRC event, with the support of Citroën Racing in order to acquire experience in a new setting.

The young Spaniard produced some promising times, before he was caught out on SS6. Cachon and his co-driver Angel Luis Vela rejoined under “New Rally” rules, producing some impressive times close to the top ten in the RC2, before ending the rally in 22nd place in class.

With 107 Formula 1 Grand Prix events under his belt, Jos Verstappen decided to take on a new challenge in rallying. Having contested four events as part of the Belgian Master Cup, he lined up in Ypres for his first appearance in the WRC.

Competing in Ypres as part of the Belgian Rally Championship, Maxime Potty and Renaud Herman scored vital points with a fine sixth-place finish, whilst Davy Vanneste and Kris D’Alleine secured a top-ten finish with ninth place. On his first season in rallying, Dutch driver Roger Hodenius and co-driver Davy Thierie managed to keep out of trouble to claim a top 20 finish in the Belgian Rally Championship standings.

“Winning the WRC2 class at Ypres Rally Belgium is a dream come true for me. I’ve often led the rally but have never managed to win it. This weekend, I was really determined to get over the line. I gave It everything I had; it really meant a lot to me. We had a good race, grabbed some stage wins and also managed our pace when we had to. Andy Malfoy, my co-driver, and I felt quite relaxed in the C3 Rally2. We’re really pleased with our performance this weekend. The DG Sport team did a great job.”

“It’s a difficult rally with changeable road conditions so we worked a lot to find a set-up of the C3 Rally2 that I was comfortable with. We managed to find a good rhythm as we completed more stages. The car was well-balanced, but the feeling wasn’t totally there. It’s something we’ll work on so we can be quick from the get-go on the opening stages of the Acropolis Rally. We nonetheless scored plenty of points for the WRC2 championship with this third podium of the season.”

“It’s been a very intense weekend with five C3 Rally2s entered and that calls for a great deal of cohesion and togetherness in the team. We’re used to competing in the Belgian Rally Championship, but the WRC is a totally different ballgame. We did lot of work before the weekend to prepare for this big home rally. We are proud to see Stéphane Lefebvre win. We also worked a lot with Citroën Racing and DG Sport to prepare for this success. It’s a win on two fronts, because we also score full points for the Belgian Rally Championship. We can be equally proud to see all five of our C3 Rally2s make it to the end of this WRC rally. It’s just reward for all the work put in by the team on preparation of the cars.”

“We are very proud of the performance of all the teams and crews competing this weekend. The seven C3 Rally2s that started the weekend all made it to the end, with Stéphane Lefebvre winning the WRC2 class and Yohan Rossel finishing in third place. These results confirm the speed of our drivers and the performance and reliability of the C3 Rally2 on what is a very tricky event. Of the 20 stages contested this weekend, 13 were won by C3 Rally2 drivers, so there can really be no doubt whatsoever about this performance in Ypres. In addition to finishing first in the WRC2 class, Stéphane Lefebvre has also extended his lead in the Belgian Rally Championship, taking his tally to four wins out of four.”