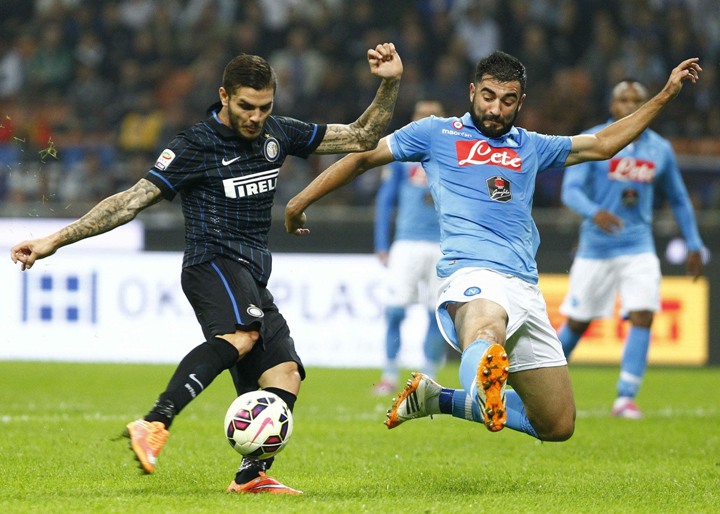 Napoli’s Serie A title credentials face the acid test on a trip to Inter Milan on Saturday when record-chasing striker Gonzalo Higuain sits out the second of a four-game ban for the visitors.

Higuain, whose 30-goal league tally so far leaves him just five short of Gunnar Nordahl’s all-time Serie A record for AC Milan, was handed the untimely sanction two weeks ago after a spectacular meltdown at Udinese.

The former Real Madrid striker is only set to return in time for Napoli’s final three games of the season, beginning with a home fixture against Atalanta on May 2.

By then, the dream of a first scudetto in 26 years could be over for Maurizio Sarri’s men, whose shock 3-1 defeat to Udinese two weeks ago left them six points behind leaders Juventus.

Juventus are fully expected to stretch their unbeaten run to 23 games against a Palermo side that is in full crisis mode following yet another coaching switch that sees Davide Ballardini return to the Sicilian club.

Defeat for Napoli coupled with a win for Juve would leave the champions nine points in front with five games to play and virtually secure a fifth consecutive league trophy for the first time since 1935.

Napoli president Aurelio De Laurentiis on Wednesday broke the club’s ongoing boycott of the media — following protests at unfair reporting in Italy — but only to say: “I haven’t received any offers for Higuain.”

But the mood at the club is said to be defiant ahead of the weekend’s top fixture at the San Siro.

Inter, in fourth at six points behind third-placed Roma, who hold he final Champions League qualifying spot, have not given up their hopes of reaching Europe’s premier club event next season.

“It’s never an easy match — it never has been — but we want to get the result and secure three points.”

Ahead of Saturday, they also welcome Senegal defender Kalidou Koulibaly back from injury.

While a win for Napoli would keep their faint hopes alive, it could spell the end of Inter’s unlikely Champions League bid and give Roma extra incentive for a tough trip to Atalanta.

Roma are unbeaten in 11 games, since a 1-0 defeat to Juventus in late January, but Atalanta — one of Italy’s best-supported teams — have won their past two home outings including a shock 2-1 defeat of AC Milan a fortnight ago.

A Roma defeat would obviously be welcomed by Inter, but former Roma and Italy defender Vincent Candela believes the capital side can aim even higher and snatch the league’s second, automatic Champions League spot from Napoli.

“We have to win in Bergamo, no matter what happens with Napoli, and then we’ll see what happens,” he told RomaTV.

“If Inter win, then it’s all down to us. I still believe we can finish second, it would be a great comeback after the difficult start to the campaign.”

Elsewhere, Cristian Brocchi makes his debut as Milan’s new coach following the shock sacking of Sinisa Mihajlovic on Tuesday on a tough trip to Sampdoria on Sunday.

Brocchi, the club’s former youth team coach, said he would “do things differently”.

He may have stolen the idea from Napoli coach Sarri, but he kept to his word by introducing a drone to their training session on Thursday.