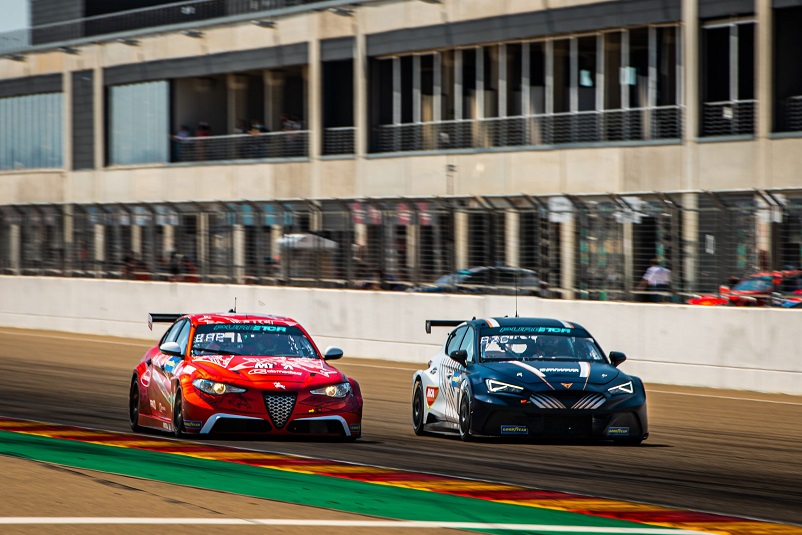 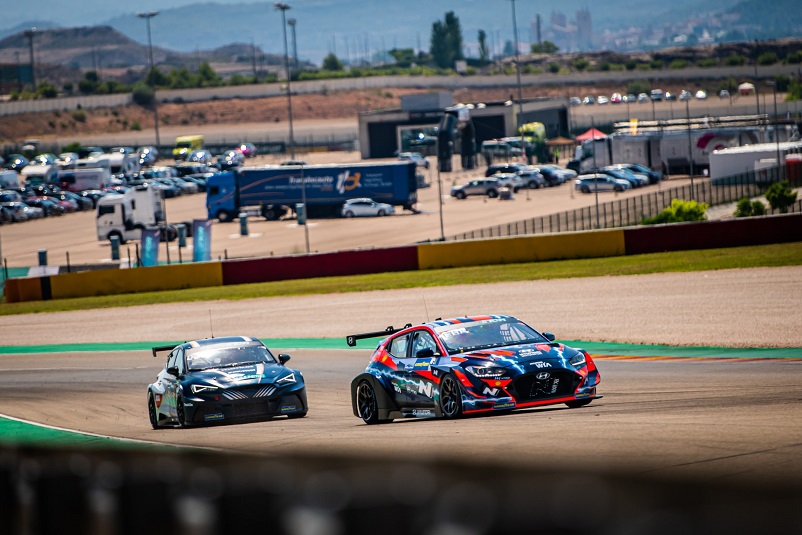 On a day when each of PURE ETCR’s competing manufacturers scored a Round 2 victory, it was series leader Azcona who stamped his authority by defeating Romeo Ferraris-M1RA’s Rodrigo Baptista’s in the first Round 2 Battle of the day.

He then went a step further by taking pole position for DHL SuperFinal A – the first of his PURE ETCR career – to end the day undefeated and claim the TAG Heuer Best Lap Trophy as the fastest driver in the session across both pools.

His Saturday successes means he has the highest number of points possible at this stage – 27 – and leads Pool A from Hyundai’s Augusto Farfus and Baptista, who were also his closest rivals in the Time Trial and completed the top three for DHL SuperFinal A.

The real drama happened in Pool B, however. With Ekström having defeated John Filippi’s Hyundai to win Battle 1, and in doing so secured his status as the Pool’s overnight leader, attention turned to the fight between Luca Filippi’s Guilia ETCR by Romeo Ferraris and Vernay.

It was a fight that never materialised as a broken driveshaft prevented the Frenchman from exiting the pitlane.

His car repaired (and driven well by Farfus in Time Trial A), Vernay tore around the circuit to claim pole position for a second-straight SuperFinal B. Ironically the driver be beat – by just five hundredths of a second – was Luca Filippi. Ekström completed the top three.

Webb and Nagy swapped the lead several times on the final lap, Webb eventually nipping through for victory at the hairpin two corners from home when Nagy ran wide after using the last of his Power-up to pass his rival on the run into the braking zone.

Sunday’s action is set to be even more dramatic with both DHL SuperFinals starting with an off-set grid and 50 points on offer to the winner of each.

Currently every one of the competing drivers is still in with a chance of being crowned King of the Weekend and securing the TAG Heuer Most Valuable Driver (#MVD) award.

Mikel Azcona (CUPRA X Zengo Motorsport), said: “It’s been an amazing day, winning Round 2, leading Pool A and taking pole position for SuperFinal A at my home event, I couldn’t be happier. I’m really proud of the team and of my team-mates. We’re doing a really good job this year and the car is really, really good. I feel strong, but still the big race is coming tomorrow. We have to focus and keep pushing. It’s going to be tough because the hot weather makes managing the tyres not so easy. With six cars on the track tomorrow it’s going to be hard, but I’m really happy.”

Jean-Karl Vernay (Hyundai Motorsport N), said: “It has been intense mentally. I don’t remember such an intense day. The day didn’t start well, but it ended very well. The lap was very good for pole. CUPRA did two very good laps with Mikel and Mattias but the target was to try and beat them and we achieved this in Pool B so I’m happy. I’m looking ahead to tomorrow. It’s been a tiring day because I’ve been switching between the PURE ETCR and WTCR cars; lots of meetings and lots of laps in two totally different cars. But we’ve got the pole.”

Mattias Ekstrom (CUPRA X Zengo Motorsport), said: “It’s been a good day. In Round 2 I had a very exciting race with John. Off the start I knew the Power-Up use would be quite strategic so I had an advantage on the inside. I could see he was very fast, so I knew I had to just not make any silly mistakes. Then the Time Trial is the highlight of the weekend because it’s 500kW and it’s one of the most difficult things I’ve done in my career. We did some laps in this configuration in practice, but when you come out in different track conditions and you try and tame the beast for one lap, it’s really challenging.”

Luca Filippi (Romeo Ferraris-M1RA) said: “It’s been a very good day. I start in the middle for the DHL SuperFinal, so we had a good result. On the other hand, I’m only half a tenth away from pole so it’s a little disappointing not to get it. We’ve made a step forward here and the Romeo Ferraris-M1RA guys are going in the right direction. We’ve changed the set-up and are using different spring rates and it’s working. We’ve made a few other changes and the result is we’re looking strong for tomorrow.”