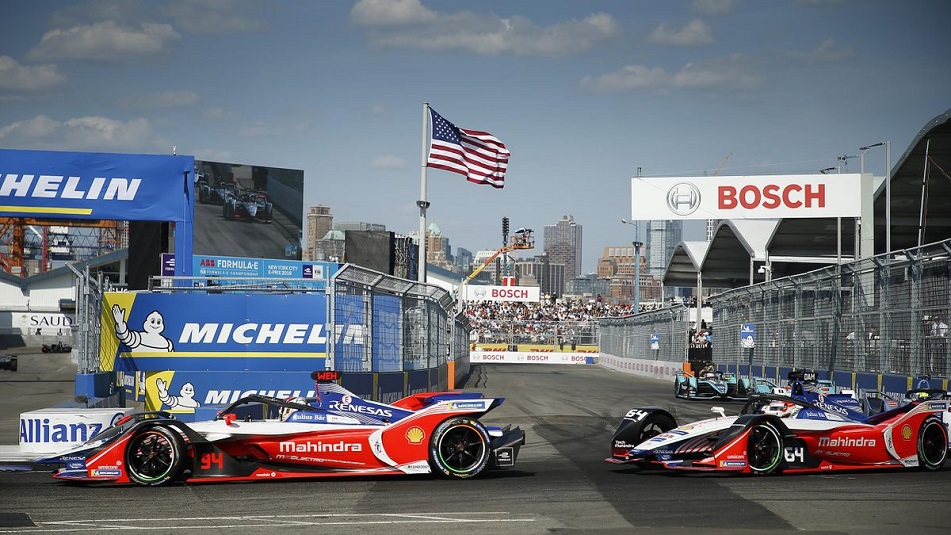 Maximilian Guenther pieced together a perfect race to take his third ABB FIA Formula E World Championship victory in the ABB New York City E-Prix Round 10, and on home soil for the BMW i Andretti Motorsport team ahead of Jean-Eric Vergne (DS TECHEETAH) and Lucas di Grassi (Audi Sport ABT Schaeffler)
The 24-year-old German measured things maturely from fourth on the grid to pick his way into the lead as double champion Vergne forced his way by polesitter and long-time race leader Nick Cassidy (Envision Virgin Racing) at the hairpin with five minutes to go
Guenther made his efficiency advantage count, with a percentage point of usable energy in-hand over Vergne meaning the Frenchman had to settle for second spot while Audi Sport ABT Schaeffler’s Lucas di Grassi clambered up the order from seventh to take the chequered flag third
The result made it nine winners from 10 races to-date in Formula E’s inaugural campaign as an FIA World Championship, while 19 of the 24 drivers have climbed the podium steps in a super-competitive Season 7
Robin Frijns’s fifth-place finish saw him draw level with Edo Mortara (ROKiT Venturi Racing) at the top of the Drivers’ standings after the Swiss-Italian’s non-score
Vergne propelled himself into third in the table, and his result helped DS TECHEETAH take the Teams’ initiative ahead of Round 11 in The Big Apple tomorrow (July 11) from 1330 local time
Racing action returns tomorrow, July 11 for Round 11 of the 2020/21 ABB FIA Formula E World Championship – the ABB New York City E-Prix.
Fastest Group in Group Qualifying:
(1 point):
Sébastien Buemi – 1:09.531s
Nissan e.dams
Julius Baer Pole Position:
(3 points):
Nick Cassidy – 1.09.338s
Envision Virgin Racing
TAG Heuer Fastest Lap:
(1 point):
Sam Bird – 1:11.082s
Envision Virgin Racing
BMW I ANDRETTI MOTORSPORT – MAXIMILIAN GÜNTHER (DEU)
“Definitely the overtake [was the defining moment of the race], I was managing the race quite well, I had more energy than the two guys in front of me, but it was not so easy to overtake. I was fighting with Nick for the win and then on the hairpin I saw this gap and went for it and it worked out for us. It is definitely a good feeling.”

“It was a very good race, I tried to overtake Cassidy but he turned into me and we both touched and I could not rotate the car. I was very fast and maybe deserved the win today, so it is a shame in a way but I got some important points for the team. We need to keep in mind the bigger goal here which is to the championship, so we will take these points and count them at the end of the season.”

“I started in seventh, the car was not perfect today so the podium was the best we could do and it is a good enough result. We are now going to fight.”