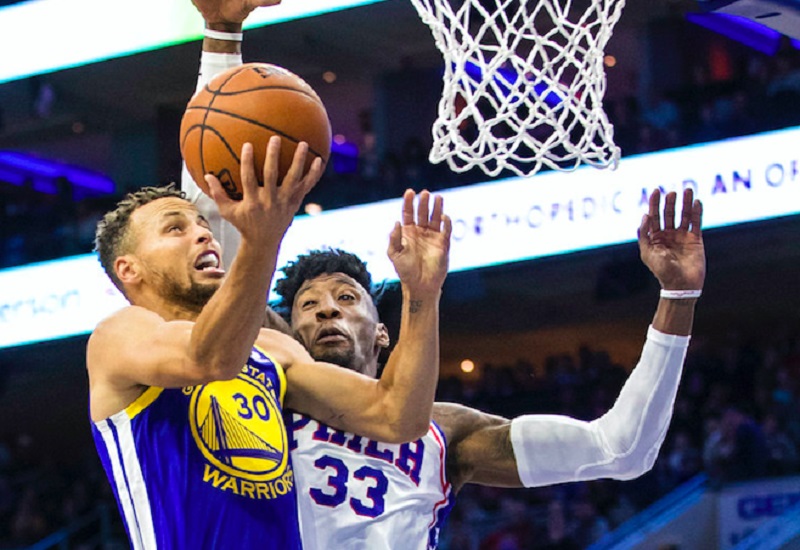 Stephen Curry scored 35 points as the Golden State Warriors bounced back from a disastrous first half performance to overpower the Philadelphia 76ers 124-116 on Saturday.

Curry erupted in a one-sided third quarter for the Warriors after the Sixers had stunned the reigning NBA champions with an astonishing 47-point first quarter display at Philadelphia’s Wells Fargo Center.

The points haul was the most the Warriors have conceded in a single quarter since giving up 48 points in the fourth quarter of a game against Portland in November 1992.

The Sixers led 47-28 after the first period and extended their lead to 74-52 at the break, leaving the Warriors staring at a potential blowout loss.

However Steve Kerr’s men came roaring back after half-time, and with Curry and Kevin Durant to the fore, put up their own 47-point quarter in the third.

Curry rattled in 20 points alone in the third quarter as the Warriors erased a 22-point Sixers lead and quickly accelerated clear of their rivals.

By the end of the third, the Warriors had raced into a 99-89 lead, a comfortable buffer they never looked like relinquishing throughout the fourth.

“They played well in the first quarter so you’ve got to credit them,” Curry said afterward. “

“Sometimes when you get down like that it’s not all our fault. We helped them a little bit with some turnovers and easy three-pointers, which gave them momentum, especially at home.

“The second half, at the beginning of the third quarter we got some stops and that allowed our offense to take over. We executed better.”

“They came out and punched us in the mouth but we were able to weather the storm,” Green said.

“First half they bullied us. We gave no resistance, they got whatever they wanted. In the third quarter we made some stops, Steph got hot and we started playing like ourselves.”

Ben Simmons led the scoring for the Sixers with 23 points while Joel Embiid had 21 points. Four other Sixers players — Dario Saric, Robert Covington, J.J. Redick and Timothe Luwawu-Cabarrot made double figures. The Warriors improved to 12-4 with the win while the Sixers fell to 8-7.

Kyrie Irving scored 30 points and forward Jaylen Brown added 27 as the Celtics improved to 15-2 to head the Eastern Conference.

Boston’s current winning streak is the fifth-longest in franchise history, putting them within sight of the club record of 19 set in 2008.

Irving went 10-for-12 from the field, including five three-pointers, with five assists and four rebounds.

Brown made four three-pointers, and had four rebounds.

The Houston Rockets meanwhile remained on top of the Western Conference standings at 13-4, one game ahead of the Warriors, after beating the Memphis Grizzlies 105-83.

James Harden led the Houston scoring with 29 points while four other Rockets players made double figures.

The Los Angeles Clippers were unable to break free of their form slump however, crashing to an eighth straight loss in their 102-87 loss to the Charlotte Hornets.