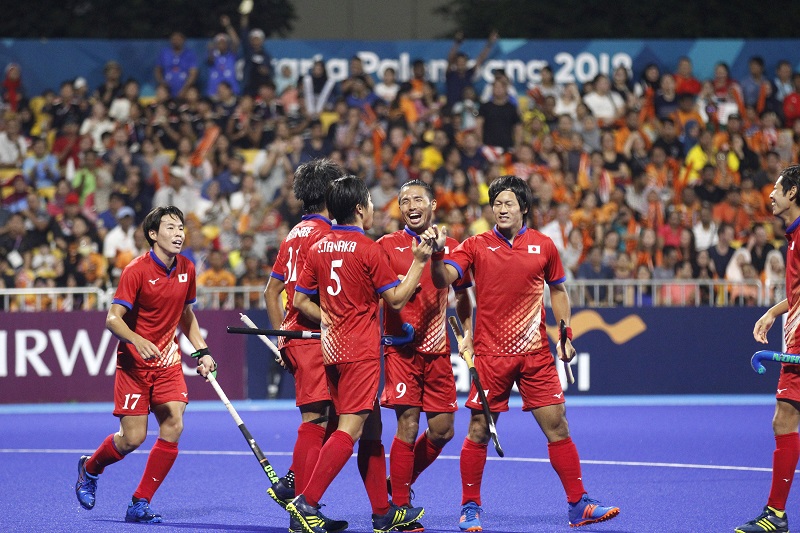 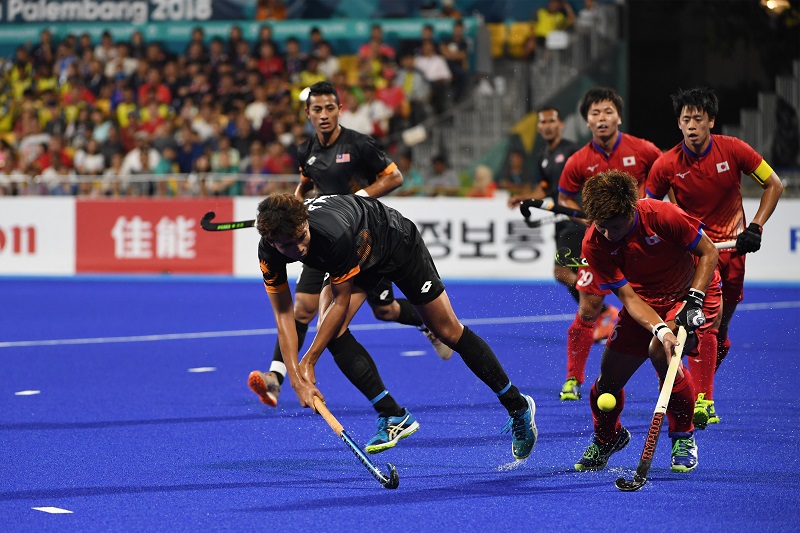 It was double joy for Japan as the men joined the women as Asian Games hockey champions after they beat Malaysia in what can only be called the most scintillating of matches.
A 6-6 scoreline at full-time reflected a game that was played with a ferocity and an intensity worthy of a final. With Malaysia leading 5-2 at one point, it was also one of the greatest comebacks by a team in a final. The lower-ranked Japan team (FIH Hero World Ranking:16) then held their nerve to take the shoot-out 3-1 and emulate the women to be the first Japanese men’s hockey team to win gold at the Asian Games.
The team’s highest previous finish was a bronze medal at the 1970 Asian Games.
The double gold means Japan becomes just the second nation to win hockey gold medals in both the men’s and women’s competitions. Previously Korea had achieved this in 1986 and 1994.
In the earlier bronze medal match, India (WR:5) beat Pakistan (WR:13) in another tightly contested game. The 2-1 scoreline might not have had the fireworks of the 12-goal final but it was an absorbing encounter nonetheless.
The men’s competition also threw up another hockey world record – according to Indian journalist and statistics expert BG Joshi, the 2018 Asian Games had seen more goals scored in a competition than any other international event since 1908. The 314 goals scored in Jakarta eclipsed the previous record – 300 goals at the World Cup in Kuala Lumpur in 2002.
The opening minutes of the final match of this absorbing Asian Games competition looked to be going the way of the rankings.Razie Rahim gave Malaysia the lead in the fourth minute as he scored from a penalty corner. Japan equalised five minutes later through Seren Tanaka but two quick goals from Tengku Tajuddin, both from open play, meant Malaysia went into the first quarter break with a 3-1 lead. Faizal Faari made it 4-1 before Kenta Tanaka brought it back to 4-2.
A goalless third quarter didn’t really prepare the huge crowds for the exciting final 15 minutes as six goals were scored in a frantic rush for the gold medal. Head coach to Malaysia Stephen van Huizen could have been forgiven for thinking his team had won the title when Amirol Arshad made it 5-1, but goals from Kentaro Fukuda, Kenta Tanaka and Koji Yamasaki made the score 5-5 with two minutes left on the clock.
Tajudden scored his third and Malaysia’s sixth goal but the team’s joy was short-lived as Razie Rahim was sent from the pitch with a yellow card and Hiromasa Ochiai equalised from a penalty corner.
The players barely had time to compose themselves before it was shoot out. Malaysia had beaten India on shoot-out two days earlier but were unable to repeat the feat. Firman Ashari scored for Malaysia but Japan’s ‘keeper Takashi Yoshikawa saved the next three attempts by the Speedy Tigers.
In reply Koji Yamasaki, Kenta Tanaka and Kazuma Murata all found the back of the net to give Japan, and head coach Siegfried Aikman, a historic gold medal.
The result means that no team will qualify for the Tokyo 2020 Olympic Games from this tournament as Japan, as host nation, have an automatic place. A further Olympic qualification event will now take place towards the end of 2019.
In the bronze medal match, India defeated Pakistan by two goals to one. Akashdeep Singh gave India an early lead and the score was doubled by Harmanpreet Singh in the 50th minute. Pakistan fought back through Muhammad Atiq but India dug deep to win the bronze medal.
The top goal scorer award was won by Jang Jonghyun of Korea, who scored 15 goals. Akashdeep Singh and Rupinder Singh of India finished joint second on 13 goals.
Final Placings
1. Japan (WR:16)
2. Malaysia (WR:12)
3. India (WR:5)
4. Pakistan (WR:13)
5. Korea (WR:14)
6. Bangladesh (WR:31)
7. Oman (WR:33)
8. Sri Lanka (WR:38)
9. Thailand (WR:47)
10. Indonesia (Unranked)
11. Kazakhstan (WR:86)
12. Hong Kong China ((WR:45)