Home 2022 ‘Dreams come true’ for Argentina with victory in Vancouver 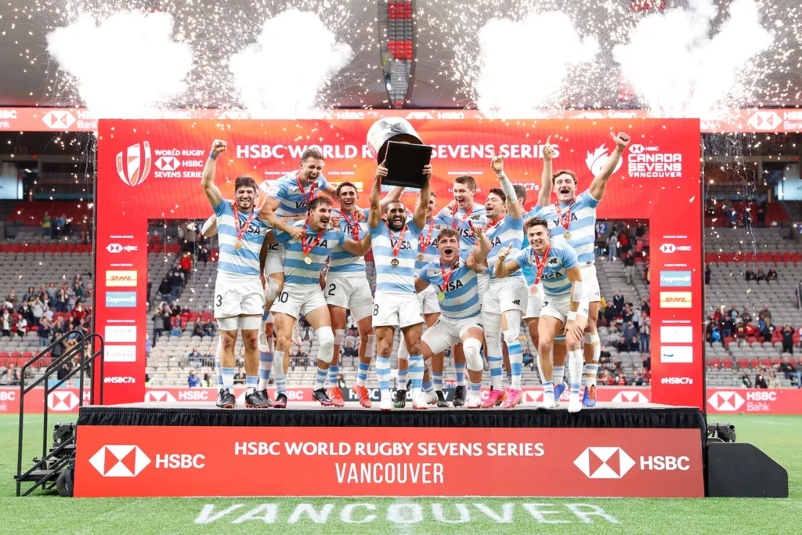 South Africa finish fifth and continue as Series leaders on 111 points, ahead of Argentina on 105 points and Australia with 100 points

The next Series action sees the fifth round of six on the women’s HSBC World Rugby Sevens Series 2022, in Langford, Canada on April 30 and May 1

The men’s teams return to action in Toulouse, France on 20-22 May

The Argentineans played some scintillating rugby all weekend and produced a composed performance in the final to dominate Olympic champions Fiji, the winners in Singapore the week before, to lift the title thanks to a 29-10 victory in the final.

Australia claimed the bronze medal after winning a tight contest 21-19 against Samoa who impressed fans throughout the tournament with their speed and skill.

Samoa had played brilliantly to defeat South Africa in quarter-finals, but Fiji were at their irresistible best as they saw off the shellshocked Samoans 45-5 to reach the final. Argentina beat Australia 24-12 in the other semi-final.

They say that good things come to those who wait and that was certainly the case for Olympic bronze medallists Argentina on day two of the HSBC Canada Sevens men’s event on Sunday.

Santiago Gómez Cora, the Argentina head coach, was playing the last time that his country last won a Series event back in 2009 in San Diego, which was 108 Series events ago. He also played in 2004 when they won their first ever Cup final in Los Angeles.

As a result he was understandably emotional after the full-time whistle blew and he said: “You have to dream because dreams do come.

“I loved playing on the circuit, but ever since I have been a coach this has been the moment I have been working towards and my players must take all the credit because they work so hard and they wanted to win this one for their country so much.”

World Rugby Sevens Player of the Year Marcos Moneta scored a pair of tries in both the semi-final and final to take his tally to ten for the weekend, and the player of the final said:

“We knew that Fiji would come at us, but we matched them physically and we managed to score some good tries when our chances came along. This one was for all of our fans around the world who give us so much support – thank you.”

Earlier in the day all-time Series top try scorer Dan Norton bid his farewell in Vancouver after announcing his retirement from international rugby sevens. Norton scored an incredible 358 tries over an outstanding career which included an Olympic silver medal with Great Britain at the Rio 2016 Games and a pair of silver medals with England at Rugby World Cup Sevens in 2013 and 2018.

South Africa maintain pole position in the Series standings after six rounds with 111 points, but their lead over Australia has narrowed to six points and Argentina are in third position with 100 points.

Vancouver was the sixth of nine rounds in the HSBC World Rugby Sevens Series 2022 and the teams will now take a breather before returning to action in Toulouse, France on 20-22 May.

Before Toulouse, the women’s teams will take centre stage as the fifth and penultimate round of the women’s Series takes place in Langford, Canada on 30 April – 1 May.

Tickets for the HSBC Women’s Canada Sevens are available at www.canadasevens.com/womens