Sports247
Home News Durant in command as Warriors down Cavs 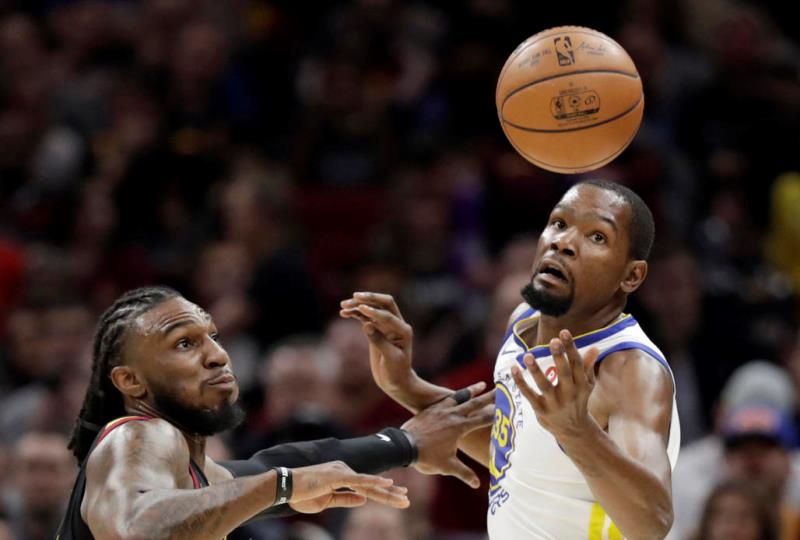 Kevin Durant scored 32 points as the Golden State Warriors overpowered the Cleveland Cavaliers with a late rally to score a 118-108 win in a pulsating clash between the two NBA arch-rivals on Monday.

Durant added seven assists and pulled down four rebounds as the Warriors completed back-to-back wins over the Cavs following their victory in the Christmas Day meeting.

LeBron James and Cleveland had gone into the game at the Quicken Loans Arena determined to halt a three-game losing streak by beating the Warriors, who they have faced in the last three editions of the NBA Finals.

The Cavs had got off to a flying start, jumping out to a seven-point lead late in the first quarter before the Warriors clawed it back to 35-37.

The Cavaliers, however, were again on top in the second quarter, building a 64-57 lead as the halftime buzzer sounded.

But the Warriors came back with renewed vigor after the break, and with Durant and Steph Curry finding their range, were clickly back into the contest.

The Warriors outscored Cleveland by 36-27 in the third quarter, edging into a six-point lead at 91-85 when Durant sunk a 29-foot three-point jumper.

The Warriors led 93-91 heading into the fourth, and with Cleveland starting to tire, the NBA champions turned the screw.

A Draymond Green layup put the Warriors 10 points clear at 105-95 with 5min 44sec on the clock and the visitors duly stretched further clear when Nick Young made a 21-foot jump shot to make it 113-99.

Durant completed a fine night’s work with a sublime 26-foot three-pointer to extend the Warriors lead at 116-104.

For Cleveland, James finished with 32 points, with Isaiah Thomas adding 19 and Kevin Love 17.

Warriors coach Steve Kerr said an improved defensive effort in the second half had laid the foundations for the win.

“I was a little upset at half-time just because we weren’t guarding anybody, we didn’t play with much intensity,” Kerr said.

“We were going against a team we’ve played in the NBA Finals for three straight years. We should have had more intensity at the start of the game.

The win saw the Warriors improve to 36-9 at the top of the Western Conference Standings, the best record in the NBA.

Cleveland, meanwhile, are at 26-17, and are struggling to pull out of a slump in form which has included eight defeats in their last 10 games.

Elsewhere on Monday, a packed program to mark the Martin Luther King Jr holiday saw the Toronto Raptors (29-13) beaten by the Philadelphia 76ers.

The Sixers’ Ben Simmons and Toronto’s Kyle Lowry were both ejected in the closing seconds of an ill-tempered clash.

Joel Embiid starred for with 34 points and 11 rebounds as the Sixers improved to 20-20.

In Washington, Giannis Antetokounmpo posted 27 points and 20 rebounds as the Milwaukee Bucks defeated the Wizards 104-95.

In Atlanta, the Hawks (12-31) scored an upset over the San Antonio Spurs (29-16) to run out 102-99 victors. LaMarcus Aldridge scored 25 points for the visiting Spurs, but was outshone by Atlanta’s Dennis Schroder who topscored with 26 points.

The Oklahoma City Thunder produced the comeback of the night in their game against the Sacramento Kings, overturning a 15-point deficit to win 95-88.

Russell Westbrook just missed out on a triple-double, finishing with 19 points, 16 rebounds and nine assists. The Thunder improved to 24-20 with the victory. – Agence France-Presse