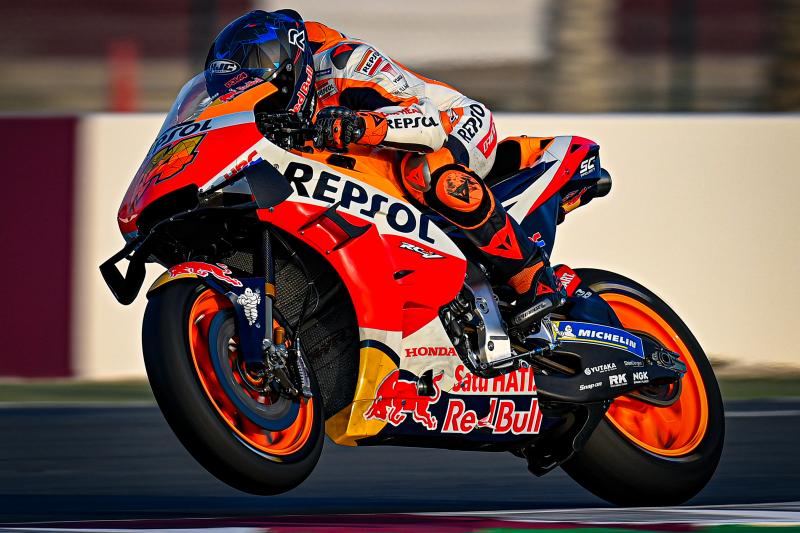 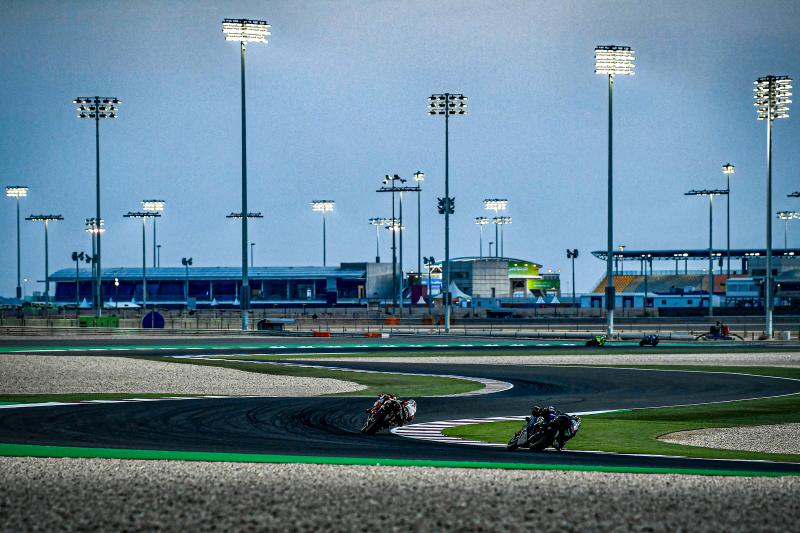 The wind was once more playing a role in proceedings as the moment every MotoGP™ fan has been waiting for arrived: the entire grid hopping on their bikes and heading for a ride for the first time since Portimao’s curtain closer. All 29 riders on the ground in Doha enjoyed some valuable track time despite another blustery day at the Losail International Circuit, with Michelin confirming that by 5pm local time, track conditions were starting to come to the riders.

After sitting out the Shakedown Test, Aleix Espargaro was putting in the work on his brand-new RS-GP machine and completed 57 laps. The whole bike we’re seeing is new, with Aprilia updating the engine, chassis, exhausts, a carbon swingarm and the Noale outfit also have two new aero designs that the riders are testing to see which is better.

Finishing P1 is a very promising start to the season and Espargaro’s time was just a couple of tenths shy of Aprilia’s best time at 2020’s Qatar Test, with Espargaro also displaying that Aprilia have holeshot device on the front and rear – along with Honda and Ducati. Promising stuff for the Italian marque as Lorenzo Savadori, on the other side of the garage, completed 42 laps, ending with 1:56.511 as a best time.

It was a huge day over at Repsol Honda Team as Pol Espargaro made his eagerly awaited debut for the Japanese giants. A hefty 68 laps were rattled off by the Spaniard on his HRC debut as both he, Alex Marquez (LCR Honda Castrol) and Takaaki Nakagami (LCR Honda Idemitsu) were all on 2020 Hondas, with each rider’s two bikes having different exhausts.

Test rider Stefan Bradl was again donning the famous Repsol livery on track and for a lot of opening day, the German was at the summit of the timesheets. Bradl has three chassis to try in Qatar: the ‘standard’ 2020 chassis, the chassis Bradl ended the 2020 campaign on which has carbon bonded to the main beam, and HRC also have an entirely new chassis that we saw the number 6 testing in Jerez a few weeks ago. Bradl was very pleased with his and the team’s progress so far, more of the same over the remaining four days.

Alex Marquez’ day didn’t get off to the best of starts after destroying his RC213V in a final corner crash, but the double World Champion was soon back out to spin some more laps. Marquez was second quickest Honda on Day 1, finishing P10, just ahead of Nakagami in P11. 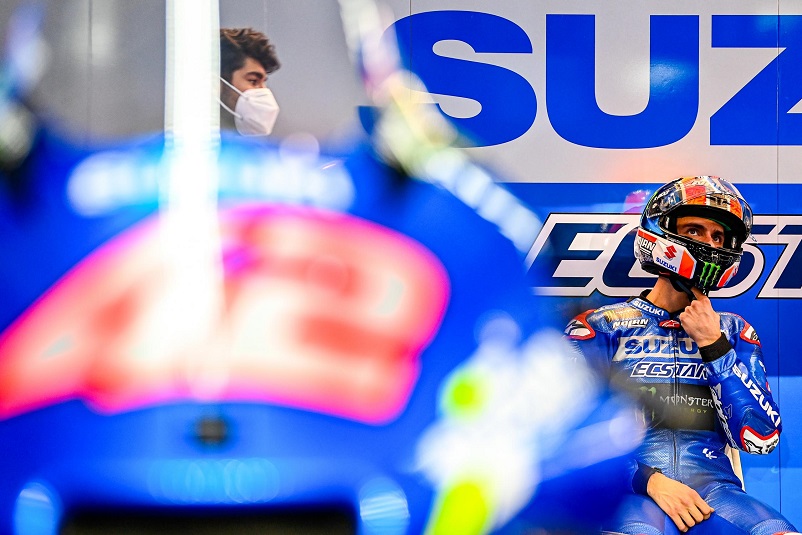 Over at World Champions Team Suzuki Ecstar, who officially unveiled their new Monster Energy-backed 2021 livery ahead of the test, Joan Mir and Alex Rins were the last riders to head out on track. Similar to most teams though, we didn’t see many changes to the bikes the Spaniards were riding at the minute. Third for Mir is a solid start to his title defending season, with Rins also inside the top 10 – P8 for the 2020 bronze medallist. The duo recorded a combined 91 laps.

Test rider Sylvain Guintoli told us that during the Shakedown Test, he was testing a 2022 engine spec as well as a new chassis, along with some other small bits. Takuya Tsuda was again the first rider out on track for the Hamamatsu factory.

Both Jack Miller and Francesco Bagnaia suited up and headed out in Ducati Lenovo Team red for the first time, the latter did unfortunately have a tumble at Turn 3 but all was good with the Italian. For the Australian, fourth fastest at the end of the day was a job well done it seems, Miller completing 54 laps in total and admitted that it felt “unreal” to be back.

Both riders were on 2020 Ducatis as they got back into the swing of things but did try the new aero, with Miller saying he couldn’t find any faults. Bagnaia finished P13 but was only 0.8s down on Espargaro’s best time.

Test rider Michele Pirro was circulating with new aero on the front of his GP21, a third extra aero vane was seen fitted lower down on the fairing. In addition, Ducati have a ‘salad box’ that looks slightly different to last year’s one. Simon Crafar reported that the Bologna factory are experimenting with a holeshot device at the front of the bike, along with Aprilia and Honda, so look out for that over the coming days. 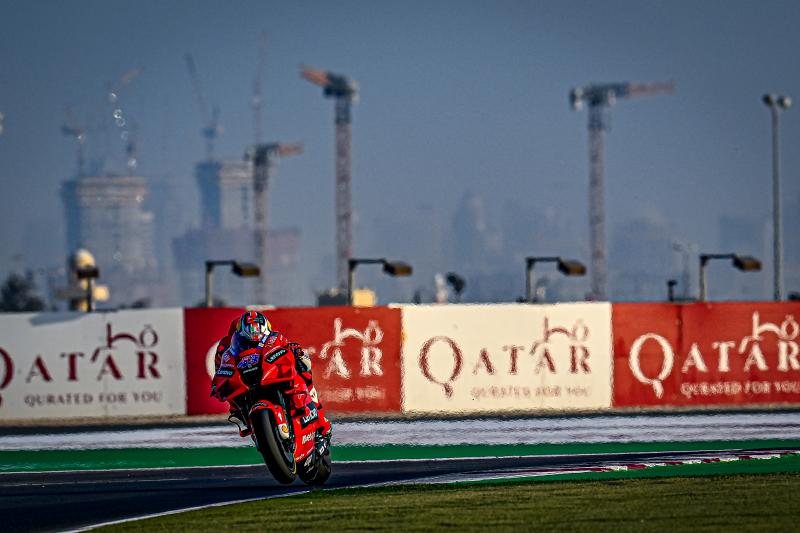 Johann Zarco was seen in Pramac Racing colours for the first time and from the outside, it looked like the Frenchman enjoyed his first day in the new office. Zarco was atop the standings for stages in the afternoon, eventually ending Saturday 6th overall with less than half a second covering him from Espargaro at the top.

Zarco’s teammate Jorge Martin (Pramac Racing) was back on track for his second day as a MotoGP™ rider, albeit with a sore leg after his Turn 3 crash during the Shakedown Test. Despite this though, Martin was the fastest rookie in P18 after setting a 1:56.147 – just a couple of tenths slower than Pol Espargaro ahead of him. Speaking on After the Flag, Martin was very happy with his day’s work.

The other two Moto2™ graduate rookies also got plenty more laps under their belts, Enea Bastianini (Avintia Esponsorama Racing) was less than a tenth away from Martin in P20 while Luca Marini (SKY VR46 Avintia) finished P24 on the times. It’s a huge learning curve for all three riders in Qatar and there’s no doubt even more improvements will be coming over the next few days.

Over in the Yamaha ranks Valentino Rossi was on board a familiar bike, but in unfamiliar colours. The new Petronas Yamaha SRT rider began his new adventure with the Malaysian team and The Doctor was seen trying two different tank covers, most likely for ergonomics. It was teammate Franco Morbidelli though who was the quickest YZR-M1 rider on Day 1, the Italian finished P7 and 0.487s adrift. 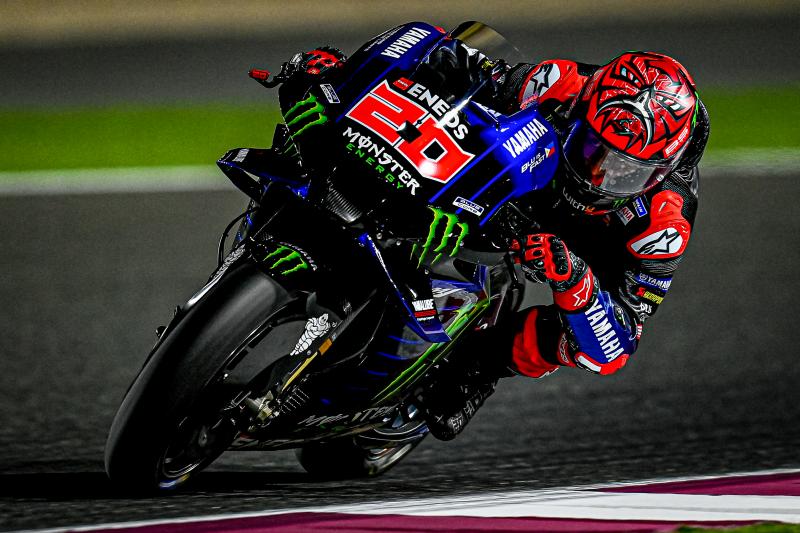 It was a big day for Fabio Quartararo too, who officially began life as a factory MotoGP™ rider today at the Losail International Circuit. The Frenchman was the busiest rider out there on Saturday after completing 69 laps on his new machine, he was just over a second off the pace in P15 – one place behind Rossi. Maverick Viñales (Monster Energy Yamaha MotoGP) notched up half a ton of laps, the Spaniard was P9.

On the face of it, there doesn’t seem to be too much different to what we saw last season on the Yamahas currently. Test riders Cal Crutchlow, Katsuyuki Nakasuga and Kohta Nozane were once more sharing bikes, so it’s very hard to tell who set the fastest times on each of the bikes labelled ‘Yamaha Test 1’, ‘Yamaha Test 2’ and ‘Yamaha Test 3’ on the timing screens.

Red Bull KTM Factory Racing’s Brad Binder and Miguel Oliveira lead the line for the Austrian manufacturer this year, with the duo both sitting near the summit in the early stages of the test. Binder fell at the notorious Turn 2 but was perfectly ok to head back for some more laps, 52 were completed by the South African in the end, he sits P12 after the opening day. Oliveira was the fastest RC16 rider on track, the Portuguese star set a 1:55.084 to finish 5th.

Danilo Petrucci struck a bright figure out on track alongside teammate Iker Lecuona as the Tech3 KTM Factory Racing pairing lapped on their new orange covered RC16s. Likewise to the factory riders, there weren’t too many differences with the bikes they were riding compared to the 2020 model, as Lecuona and Petrucci finished P22 and P23 respectively.

Test rider Dani Pedrosa was trying out some new innovations for KTM though. As Simon Crafar reported from pitlane, Pedrosa was riding an RC16 kitted out with a new chassis, a whole new tail section and a new exhaust inside that tail unit. The famous number 26 was 26th on the timesheets and completed 48 laps. 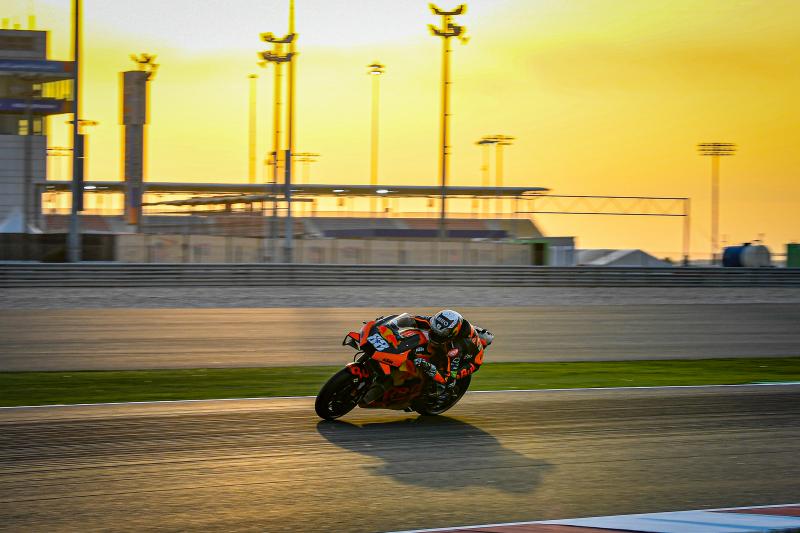 Day 2 of the Qatar Test is on Sunday’s agenda, keep up to date with all the latest happenings across MotoGP™’s social media and right here on motogp.com. Don’t forget to tune into After the Flag LIVE at 18:30 CET for all the reaction, analysis and interviews as they happen over in Doha, as well as following every lap with Live Timing.