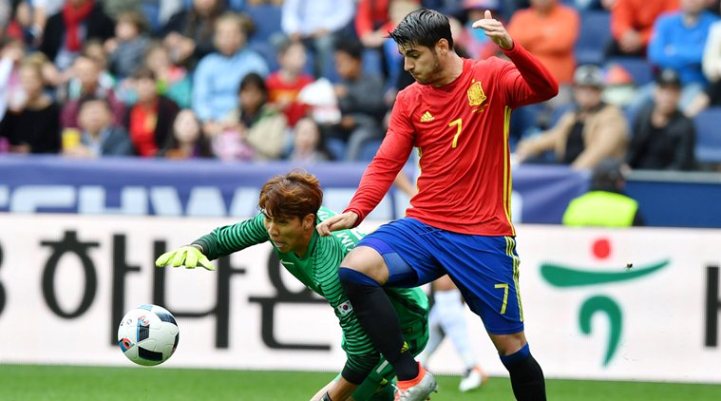 Alvaro Morata and Nolito both hit a brace as Spain warmed up for the defence of their European Championships crown by thrashing South Korea 6-1 in a friendly on Wednesday.

The Spaniards were slightly under-strength as coach Vicente Del Bosque rested players from Real Madrid and their city rivals Atletico following their exertions in the Champions League final on Saturday.

But it hardly mattered as a dominant Spain scored three times before the break Salzburg, Austria, through David Silva’s sublime free-kick, Cesc Fabregas and Nolito.

Morata netted a second-half double and Nolito grabbed his second as Spain recorded a morale-boosting thrashing of the Koreans, whose consolation seven minutes from time came from Ju Se-Jong.

Nolito had struck his first two international goals in a 3-1 friendly win over Bosnia and Herzegovina in Saint Gallen, Switzerland, on Sunday.

Arsenal full-back Hector Bellerin, who made the squad of 23 following Real defender Dani Carvajal’s injury in the Champions League final, made an appearance in a side that again included a strong Barcelona presence in the form of Gerard Pique, Jordi Alba, Andres Iniesta and Sergio Busquets.

However, having played in Real’s extra-time win on penalties over Atletico, Real’s Sergio Ramos and Lucas Vazquez, and Atletico’s Juanfran and Koke were missing and will be the last to join up with the Spanish squad on June 4.

In other friendlies on Wednesday night, world number two ranked Belgium needed an equaliser a minute from time from Everton’s Romelu Lukaku to save their blushes in Brussels against Finland.

Kasper Hamalainen gave the 61st ranked Finland, who came into the match on the back of four straight defeats, a 53rd minute lead.

Despite fielding the likes of Chelsea’s Eden Hazard, Belgium lacked creativity and struggled to break down disciplined and defensive opponents in a half-empty stadium.

In a match between two qualified sides, Czech Republic got the better of Russia 2-1 in Innsbruck, Austria.

Aleksandr Kokorin gave Russia a sixth-minute lead but Tomas Rosicky equalised from a volley with the outside of his foot on 49 minutes.

But in the last minute, Tomas Necid bagged the winner. Last Friday, the Czechs had romped to a 6-0 win over Malta.

The Netherlands may not be going to the Euros after a disastrous qualifying campaign but they beat qualified Poland 2-1 in Gdansk.

Newcastle United midfielder Georginio Wijnaldum scored the winner on 76 minutes for the Dutch, who held another Euros qualifier in Ireland to a 1-1 draw last Friday.