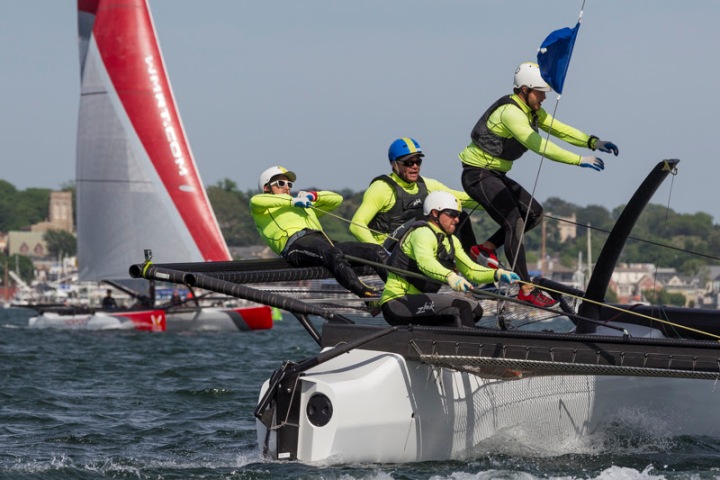 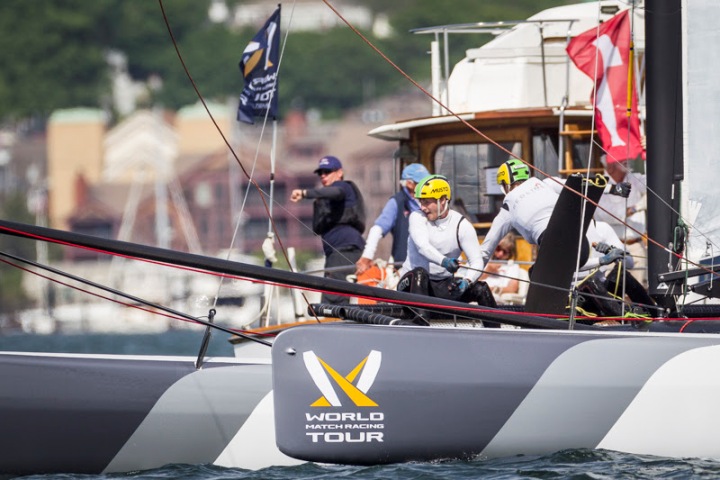 The World Match Racing Tour Newport entered its match racing phase today. While Newport Harbour was fog-free and blessed with sun all day, there was a long pause mid-way through the Qualifying Group Sail-offs as the wind slowly veered from the north into the sea breeze direction of the southeast. But from there it built to a shifty 15 knots, more than enough for the nimble M32 catamarans to fly.

The Sail-off matches were held between the bottom two finishers from each of the four groups from the Qualifying round of the first two days. The winner of each of the four Sail-offs got to ‘live another day’ by going through to the next round, the Super 16 Knockout.
Among the first to two Sail-offs, it was only Steve Thomas and his RPM Racing team that were able to take out their opponent 2-0. In Thomas’ case this was fellow Perth match racer Keith Swinton’s Team Accure.

“We haven’t raced that much considering we are from the same town,” admitted Thomas (a Royal Perth YC member, while Swinton is South of Perth YC). As to his success today, Thomas added: “I think it was mostly through just boat handling and communication. I made some pretty bad starts, but we sailed well around the course and that managed to get us in front.”

Finally as the sea breeze established the race management team, led by PRO Mattias Dahlström, was able to get fully into gear.

Ultimately Poole beat Monnin, Jerwood beat Walker, while the most hotly contested matched were between two time Olympic gold medallist and round the world sailor Iker Martinez, who won his first against David Gilmour, but lost the second two.

The pre-start in their second match was particularly aggressive with Martinez receiving a half point penalty. As Gilmour described it: “They came in really fast and luffed us and hit us and we had no opportunity to keep clear. But it was good. Iker sailed really well in Copenhagen and we knew we had a lot on to beat him. A lot of people in Copenhagen were struggling to keep it clean against Iker – he was trying to provoke everyone! But we managed to sail around the track minding ourselves.”

In the latter half of the afternoon, the Super 16 Knockout round got underway, comprising eight sets of first to three points matches, the seeding determined by yesterday’s Qualifying results.

The top four of the eight pairings got close to match point before proceedings came to an end today. US Virgin Island skipper Taylor Canfield and his US One team actually won three races against Michael Menninger of 13 Fifty Racing, an old rival he has been competing against since they were teenagers in dinghies. However both crews were docked half points for collisions.

“It was awesome day,” recounted Canfield, “although due to a couple of misjudgements by both of our teams, we each had two collisions in the first race and then another collision in the last race. We each got docked a half point for each collision, but it is not the way we should be sailing to be honest as the series leader.”

According to Canfield, the collisions were all very minor, barely scuffing the vinyl.

Britain’s six time Match Racing World Champion, Ian Williams and his GAC Pindar crew, finished the day two up against Matt Jerwood as did Nicklas Dackhammar in his series with Johnie Berntsson and his Flux Team; young Swede against older (but baby-faced) Swede.

In the first of the Swedish derby, Dackhammer led out of the start and extended but the second match was far less straightforward. “We had a tough pre-start and got a penalty,”
Dackhammer recounted.  “Then at the start we were behind and we were chasing them all around the course and finally on the last downwind we sneaked through them: We got really close to them at the upwind gate and we gybed at the same time and we came out on top, which was good.”

Watching the competition today was North Sails President, Ken Read, the man responsible for introducing the M32 catamaran to Newport four years ago. While there are four M32s that reside with private owners here in Newport, Read admits that the M32 is the only boat that has managed to entice him, a professional sailor, back into family day sailing. He is most impressed with the speed at which the M32 class has grown. “How it has evolved in such a short space of time is all a credit to Håkan [Svensson – M32 founder] and his vision, which is something in this sport that is revolutionary. He is taking a bunch of similar concepts and just blowing them up x100. This is his risk and hopefully his rewards and that is what we are all trying to ensure.”