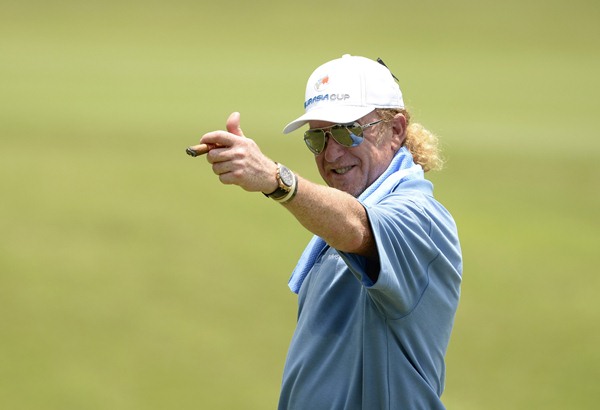 TEAM EUROPE took a huge step towards winning the inaugural EurAsia Cup today when they crushed Asia 5-0 in the opening day four-ball matches of the Ryder Cup-styled event.

Only Malaysia’s Nicholas Fung and his South Korean partner Kim Hyung-Sung had a good opportunity to give Asia a point after going three-up through seven holes.

But Europe’s pairing of Graeme McDowell and Jamie Donaldson went on the offensive and turned it around to register a 3 and 1 victory.

“We somehow managed to make the turn at one-down which was huge,” McDowell said. “And this guy (Donaldson) had a phenomenal back nine … It was great to watch.”

Spain’s Gonzalo Fernandez-Castano and Stephen Gallacher of Scotland enjoyed the biggest win of the day, defeating India’s Gaganjeet Bhullar and Anirban Lahiri 4 and 3.

Before tee-off, Malaysia’s Prime Minister Datuk Seri Najib Razak led a minute of silence together with the two team captains as a tribute to Malaysia Airlines flight MH370.

Malaysia says the Beijing-bound flight that lost contact shortly after take-off from Kuala Lumpur on March 8 crashed into the southern Indian Ocean with 239 people aboard.

All players and officials wore black ribbons, and visitors were able to leave a message on a wall of condolence, the organisers said.

The new Ryder Cup-style team tournament has incensed the administrators of a rival tournament, the Royal Trophy, a similar Europe versus Asia competition launched in 2006.

The run-up to the cup has been overshadowed by a war of words between the European Tour and organisers of the Royal Trophy.

The EurAsia Cup continues with five foursomes pairings on Friday and finishes with 10 singles matches on Saturday.

Europe only need another five-and-a-half points from the 15 that will be available over the next two days to claim the trophy.

Thongchai, who has been bullish about his team’s chances, said he was still hopeful of better days ahead.

“We will make changes to our partnership for tomorrow … as it is a tricky format,” the Thai said.

“We have to be at our best if we are to close the gap. The Europeans have more experience playing in this situation.”

Donaldson too said he was not underestimating Asia, despite the first round whitewash.

“To be five-nil up is a fantastic start. We have always said we can’t underestimate them, because at the end of the day, we are playing in Malaysia,” the Welshman said.