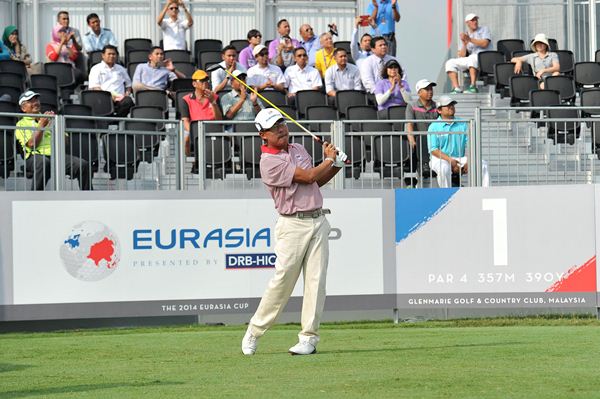 MALAYSIA’S Nicholas Fung and Kim Hyung Sung almost caused an upset against Team Europe’s heavyweights Graeme McDowell and Jamie Donaldson before going down 3 and 1 in the opening round fourball match today.

The tenacious Nicholas raised the tempo early in the round when he put his team 3-up with birdies on holes three, five and seven before Major champion McDowell and Donaldson, the current leader of European Tour’s Race To Dubai, shifted into fifth gear.

McDowell and Donaldson narrowed the three-shot deficit with birdies on eight and nine and continued their march towards victory with an eagle-five on 11 followed by a giant 50-feet birdie putt on 13 by Donaldson at the Glenmarie Golf and Country Club Garden course. They sealed the win with another birdie on 16.

Team Europe completed a whitewash over Team Asia on day one by winning all five fourball matches, but the bespectacled Nicholas remains defiant that they can mount a fight back in the second round foursome format.

“It’s good to play with Graeme McDowell and Jamie. Both our teams played good but they played better than us. We will tried to improve our game for tomorrow and try to get more birdies to beat them,” said Nicholas, a captain’s pick.

Kim tipped his hat to his playing partner: “Nicholas played really well.  I wish I could have played a little bit better for him. The European players, they played better than us today. It’s a little frustrating because nobody wants to lose.

Team Asia’s captain Thongchai Jaidee was equally impressive with the battling spirit of Nicholas and has opted to pair him with five-time Asian Tour winner Gaganjeet Bhullar of India in the foursome format.

“Nicholas played well because he has played on this course lot of times here.  I think he’s going to be better tomorrow. But you know Team Europe they are very strong and they putted very well. They don’t miss anything so that’s why we lost,” said Thongchai.

The EurAsia Cup presented by DRB-HICOM is sanctioned by the Asian Tour and European Tour. Professional Golf Malaysia (PGM) will act as the local facilitator for the event.