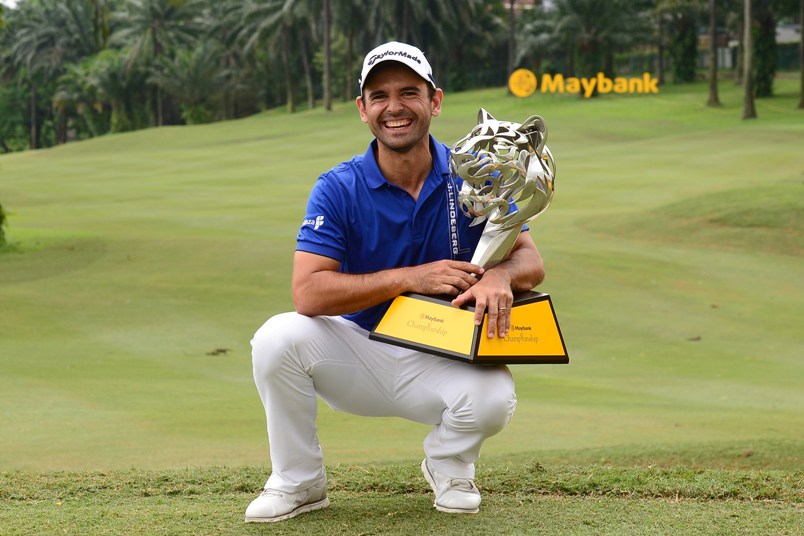 Paraguay’s Fabrizio Zanotti produced a fabulous come-from-behind victory at the Maybank Championship on Sunday, thanks to a glorious final hole eagle for a closing round of nine-under-par 63.

Starting the final day six shots back of leader Danny Willett of England, the 33-year-old Zanotti won the US$3 million co-sanctioned tournament by one shot ahead of 2014 Asian Tour Order of Merit winner David Lipsky following a thrilling conclusion at the Saujana Golf and Country Club.

No fewer than five players, including Lipsky, Willett, Bernd Wiesberger and Alexander Levy, held at least a share of the lead during a frenetic final round before Zanotti, whose other triumph on the European Tour was the 2014 BMW International Open, broke away with a terrific finish where he birdied the 17th hole to grab the lead for the first time.

He then rolled in a 12-footer for eagle on the par five last hole following an imperious iron shot approach from 249 yards out that saw his ball land in the middle of the green, roll towards the back before trickling down towards the pin. He signed off the week on 19-under-par 269 and earned US$500,000.

Lipsky, 28, had a chance to force a play-off but his birdie attempt on 18 from about 15 feet missed the target as he settled for second place with a closing 67, which included four consecutive birdies after the turn.

Wiesberger took third position following a 66, followed by Levy who carded a 68 to finish three behind the surprise champion. Masters Tournament winner Willett struggled all day, shooting a disappointing 73 to finish tied fifth with China’s Li Haotong, who closed with a 65, to emerge as Asia’s top performer.

I think it was probably the best round of my career, so I’m very happy. It was a really good day, a really good week and I’m really happy. I think it was at the 15th where I thought I might be able to win, when I made birdie there. I thought, maybe I’ll have a chance if I make two more birdies, but I made a birdie and an eagle so it was great.

It feels really good to be a winner again. I’ve been working a lot and I was not in my best run of form, missing three cuts in a row, but that’s in the past and today I’m a winner again and it feels great.

You know you shoot 67 in the final round, that’s all I could do. I did the best that I could. Obviously Fabrizio played really well, shot 63 and I couldn’t control that. I’m proud of the way I played this week.

I didn’t get anything going on the front nine. Made a good par save on nine and it kept me going. From there, I got onto a hot streak. I stayed patient and it paid off. It’s tough out here especially late in the day with these greens. It was tough to read and felt a bit bumpy. All you could do is put on a good stroke (on the last hole).

I was two behind and Fabrizio finished like that so it was just a bit shy. I played alright today, I didn’t play great but I had a couple of hiccups again after a good start, birdieing three out of the first four. There were a few stupid bogeys which is unfortunate and then I battled away but didn’t play great all week except for that stretch on Friday.

It’s good to see a couple of putts dropping and see myself getting up on top of the leaderboard. Obviously all credit to Fabrizio, he hit two great shots at the right time.

Scores after round 4 of the Maybank Championship being played at the par 72, 7186 Yards Saujana GCC course (am – denotes amateur):