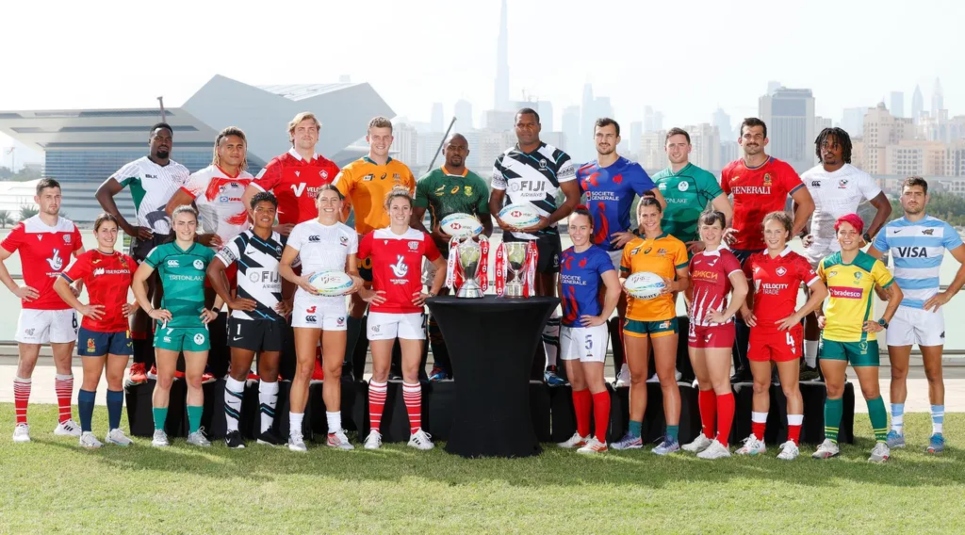 The action gets under way when France and Great Britain take to the pitch at 09:00 local time (GMT+4) on Friday in women’s Pool B

The 12 men’s and 10 women’s teams competing in the second round of the HSBC World Rugby Sevens Series 2022 in Dubai on 3-4 December are looking forward to a rousing reception from an enthusiastic crowd as fans return to The Sevens Stadium.

Matches in Dubai will be played across two pitches and will get under way at 09:00 local time (GMT+4) on Friday 3 December with France v Great Britain in women’s Pool B.

At the end of two full days of speed, skill and drama on the pitch, the women’s gold medal final will take place at 18:56 on Saturday 4 December, followed by the men’s final at 19:26 (all times local).

The men’s competition in Dubai sees the 12 teams divided into three pools of four teams, replicating the Olympic competition format.

South Africa will begin their campaign to win a fourth round of the Series in succession in Pool A against Great Britain, Ireland and Japan.

USA’s Stephen Tomasin is looking forward to the return of the fans: “Last weekend was a great start to the season for us. We showed that we can take lessons learned from one day and apply them to the next. From here, we have to show consistency and improvement in slight aspects of how we play. There’s no better place to do that than in front of 50,000 roaring fans in Dubai.”

In the women’s competition the 10 teams are divided into two pools of five with each team playing each other in the pool. The pool placings will decide the classification matches, with no quarter or semi-finals, meaning the teams who top their respective pools will contest the gold medal final.

Australia will enter Pool A in confident mood following victory last weekend, their first title on the Series since 2018. They will face in form Russia and fast improving Brazil who recorded their best ever result with sixth place last weekend following consistently impressive performances. Canada and Spain complete the Pool A line-up.

A strong looking Pool B includes three of the top four placed teams from the Olympic Games in Tokyo as silver medallists France, bronze medallists Fiji and fourth placed Great Britain prepare to do battle alongside USA and Ireland.

France captain Jade Ulutule said: “It was exciting to be back on the World Series last weekend but this weekend with the fans is going to be even more exceptional. It is quite different playing in the heat here in Dubai compared to the temperature in France right now, but we know why we came here and we know what we want so we’re going to go for it. The team is in good shape and we know what we have to improve from last weekend to reach the final, we have worked on that after our recovery and coming back to training this week so we are going to be ready for this weekend.”

New Zealand’s men’s and women’s teams, who won the respective Series titles in 2020, and Samoa’s men’s team are unable to participate in Dubai due to the challenges of the Covid-19 travel logistics.

READ ROUND ONE REVIEW >>

Great Britain are participating in the opening two rounds of the Series, as part of the standing agreement to play the calendar year 2021, before reverting to compete as national unions for the remainder of the 2022 Series, with England, Scotland and Wales participating in the men’s Series and England in the women’s series.

The 2022 Series continues as the sport looks to capitalise on a highly successful and impactful Olympic Games played in front of a huge global television audience, which generated more than 22 million video views and over 100 million social media impressions across World Rugby’s digital platforms. – WORLD RUGBY