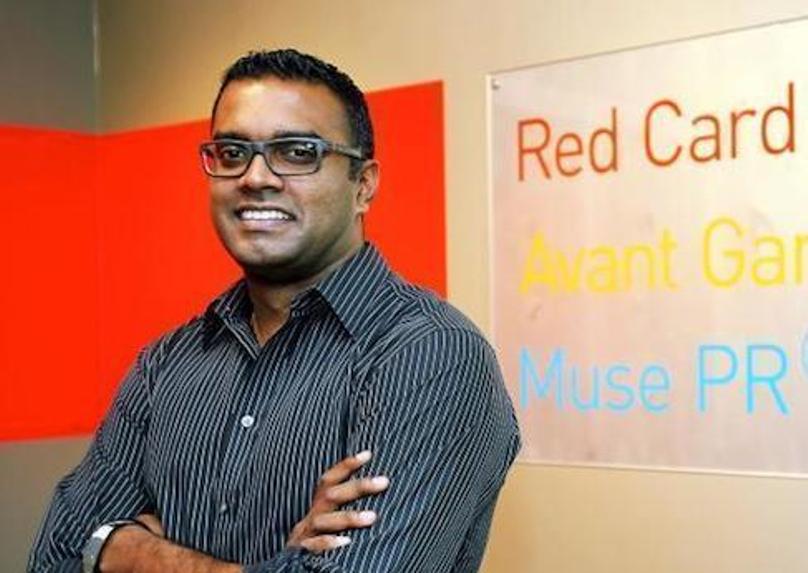 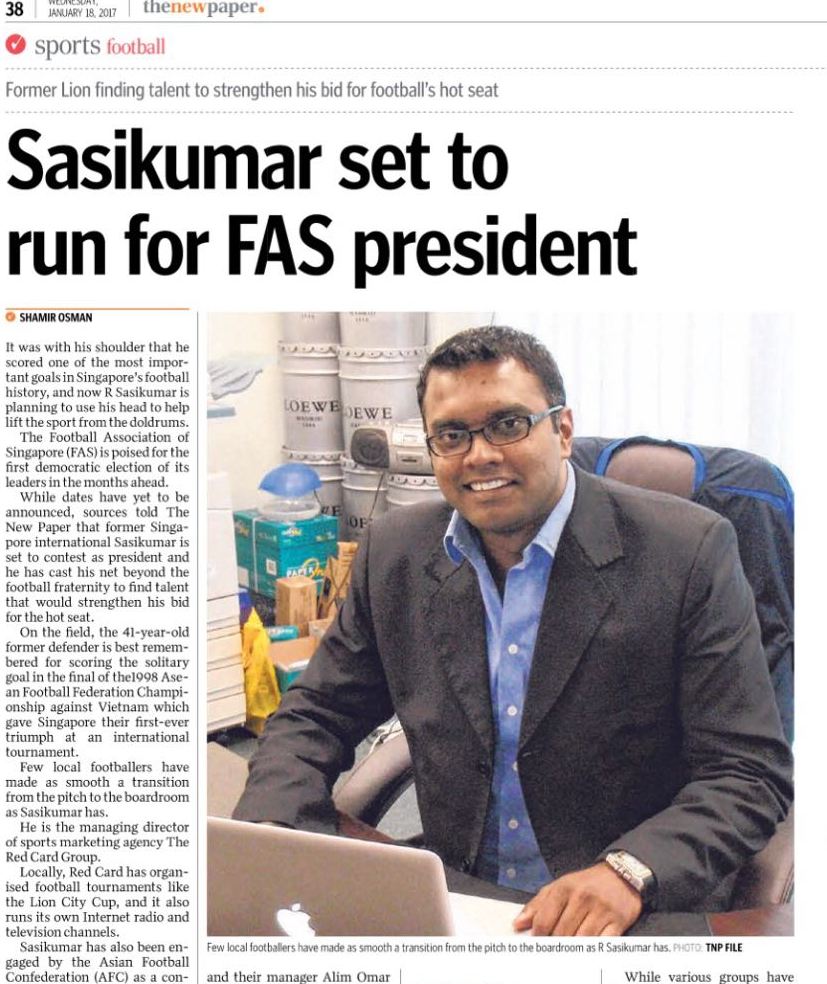 FINALLY, in the close run-up to the much-anticipated Football Association of Singapore (FAS) elections, there’s a biggest breath of fresh air.

Former Singapore defender Ramu Sasikumar, the Lion who goes down the history books as the “Shoulderman” (for his iconic solitary goal, from his shoulder (!) when Singapore won the Suzuki Cup in 1998 against Vietnam in Hanoi) now gets set to be the “Superman” to save the languishing football fortunes.

The national newspapers announced his candidature Wednesday morning to lead a new refreshing team and it has taken the “bola” fraternity by absolute storm as they believe he may well be the next Nadesan Ganesan, the late FAS boss of the famous mid-1970s who first fired up the “Kallang Roar”.

But ironically, there’s not a roar, not even a whimper, from sports-businessman Sasikumar, who declined to say a word. Probably it’s best time to keep the lips sealed and to silently work the ground to get the 40-odd FAS affiliated clubs, who will decide, for the first time, in over three decades, the new FAS team in the inaugural democratic elections, never ever experienced in Singapore.

So, who is Sasikumar?

Why has he suddenly started to fire up the football pride and passion in a little island that once won the Asean Cup four times, but today ranks as a desperately struggling “frog in the well”, ranked the worst-ever 167 position in the FIFA ranks?

In my books, Sasikumar comes positively and energetically to the frame because he knows football. He can kick a football. He has the balls below the waist to stand up for election at a time Singaporeans are hysterically crying out for someone, who simply knows the pivotal sport, that has the rousing potential to absolutely unite a country.

His credentials are the right stuff, condign and conscientious, to be a God-send football savior: He’s 42 years, played for Singapore from 1995 to 2001, donned professional football colours for SAF Warriors, Geylang United, Home United, Jurong FC and Tampines Rovers.

He’s now the Executive Chairman of the Red Card Group, which has local and regional football interests, in even kick-starting the professional leagues in Malaysia and the Philippines.

If he wins the upcoming elections, over the next three months, Sasikumar will probably be the first former international footballer to head an Asian Football Confederation (AFC)  affiliate at the right time FAS is set to celebrate its 125th anniversary as Asia’s oldest football affiliate.

Yes, FAS is simply waiting for an equitable and ethical Sasikumar-brand, who has serious and sincere visions to internally and internationally lead, to come up with a morale-boosting strategic plan to shore up declining football fortunes and more important, to give legitimate hope to the younger generation that here’s an above-board “bola man” who lives, breathes and feels for the No 1 sport.

Yes, FAS should decently stop the politics of governmentship and impartially open its arms to welcome Sasikumar because he can galvanise the grassroots and give the heartlander clubs a spirited iota of hope that the football strategy will change with more concerted emphasis at ground levels, something the incumbents have sorely neglected.

Yes, the transitional council, led by lawyer Lim Kia Tong, who appear to selfishly savour their international football positions at FIFA, AFC or AFF, must peacefully accept that they have grossly failed Singapore football, and the gospel name of the game is to give way to new blood, when the time is up.

In my opinion, the time is obligingly up for Kia Tong and his team. They’ve conceitedly hung on to their positions, with government-appointed cronies over the past three decades, without sincerely feeling the heartbeat at the ground.

The 22-year-old S-League, which starts next month, is in its worst mess, with Chief Executive Officer (CEO) Lim Chin resigning and majority of the FAS council member-incumbents have not come to watch a single S-League match in recent years!

In one word, it’s pathetic. The talk-of-football-town is that FAS and S-League don’t see eye to eye. There’s a scandalous crisis in financial support between these two in-house teams along the corridors of the FAS headquarters at Jalan Besar Stadium. And FAS staff even confessed that there’s “no teamwork” because the respective departments appear to be working contradictorily, with the referees’ department even recently abandoned to a witless solitary room next to the cleaners’ area! 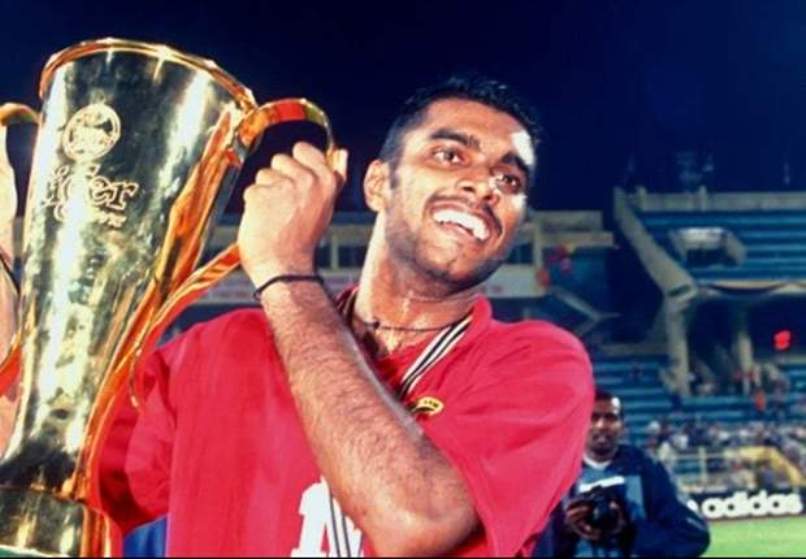 It’s high time for synergism and symbiosis. It’s ripe to restart teamwork and partisanship, which are the hallmarks of football. There must be alliance and assistance in wholeheartedly rebuilding Singapore football.

I appeal to the FAS “boarders”, not interested in the S-League (which is the solemn lifeline to groom future Lions for the national team), not keen to devotedly kick a ball with the grassroots clubs and simply flaunting their ego-ridden personal and/or professional positions, to graciously throw in the towel before they get a disgraceful big boot at the upcoming FAS election.

Sasikumar has justifiably decided to keep his lips sealed. But I know, as a personal friend, that his football-heart is on fire. He doesn’t believe in senselessly beating his chest and when he formally calls for a press conference very soon, Singaporeans will applaud him like the new-found football savior of the bona fide mould of legendary football heroes Franz Beckenbauer (Germany) and Michel Platini (France).

In his dictionary, Nadesan Ganesan’s “fire in the belly” means the divine-spirit for every footballer. Like Sir Alex Ferguson or Sir Matts Busby, fire-in-the-belly simply means you’re ready to fight with energy and determination for what you believe is right. And that’s something Ganesan repeatedly bellowed to the greatest Malaysia Cup players (when the legendary Lions won the Malaysia Cup in 1977 and 1980).

He’s gone. The former Football Association of Singapore (FAS) Chairman from 1974 to 198, thousands of die-hard footballers hailed as the founder, if not father, of the “Kallang Roar”. The special grassroots icon, who dared to be different. The criminal lawyer who spoke balls from dawn to dusk. The sporting gentleman, who was awarded the Public Service Medal (PBM) during the 1978 National Day Awards, and truly cared for football.

Now, in my viewpoint, Sasikumar is set to be another Ganesan, always with the strongest determination to win, to overcome whatever odds and, unfailingly, to give off his best shot.

Former high-minded editor P.N. Balji, who spiritedly skippered The New Paper team in the 1980s and 90s, at the height of the “Kallang Roar”, and went on to be TODAY Editor-in-Chief, said:  “Sasikumar is a football bizman,  a young man with refreshing ideas.

No direct connections with officialdom. You can’t get a better choice to run football in our country. It is now very important he gets the right people to put together a water-tight strategy to win the elections.”

Razali Saad, former 1993 Singapore skipper who sits as a Board Member of SportsSingapore, said: “Sasikumar is THE man. He has done it at every level! Player, coach, event management, sales director and now, owner of a well-known sports company. He’s the right presidential candidate for this election.”

Award-winning ex-national coach Jita Singh, who won 1981 ‘Coach of the Year’, gave the thumbs-up. “Sasikumar could be the first former national player to lead a national association just like the more established football countries like Germany and France,” he said.

“He’ll be a better person having been involved in football as a player and having the experience in sports marketing, competitions and administration. It’ll be a refreshing new start to better years ahead for local football.”

Former national coach (1992-93) and FAS Technical Director (2004-2007) P.N. Sivaji, now based in Myanmar as a technical director, sent me this SMS: “I feel Sasikumar has a balanced head on his shoulders and knows very well that the local game means a lot to him and thousands of football-passionate Singaporeans. I hope he gets a very good team to back him up.”

Arul Subramaniam, the decorated former national hockey skipper who led the gold-medal-winning 1973 SEA Games team, praised: “I feel with Sasikumar throwing in his availability for FAS President is a God-send gift. Singapore football must support him wholeheartedly as he speaks his mind from his heart and he knows the current dismal situation. I have the full trust and confidence in him to deliver.”

A close friend of Sasikumar, a former Lion, who asked not to be named, said he was “thrilled” to hear of the candidature. “He’s not a political lad, he believes in the grassroots, the younger generation and if I read his mind right, he only wants football to win,” he said. “He stands for the right football values, not cheap publicity and I know he will garner the best candidates to stand with him in what will be the most critical FAS elections in 125 years!”

Former Tampines Rovers striker Kalwant Singh, now based in Mountain View, California, and who once stood for mayor elections in USA, said: “Singapore need leaders and doers, right from the time of (the late) Lee Kuan Yew. No one else will do. I believe Sasikumar, a former Tampines Rovers stalwart, can make the big difference with the right team.” 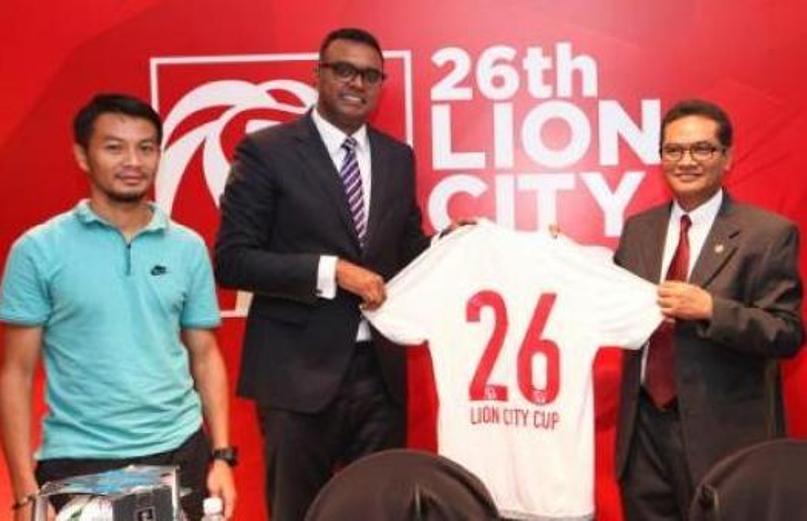 For the record, Sasikumar’s Red Card was heavily involved in the 15-year, RM1.26-billion (S$425 million) deal between the Football Association of Malaysia (FAM) and MP & Silva in January 2015 and that experience resonated with Sasikumar, who was also responsible for reviving the Lion City Cup in 2011.

“When we first suggested that Malaysian football could be worth a billion ringgit, people laughed and said it was unthinkable,” Sasikumar told The Straits Times in a March 2016 interview.

Singapore’s football economy potentially is worth a billion dollars, he daringly said in the same interview.  “If I was leading football, that would be my KPI (key performance indicator) in the next five to eight years…You can print that. People will laugh at me but so what? My belief is Singapore football can be worth that much. That’s why I’m in the industry. And if you fall short, that’s still a lot more money than you had before.”

Yes, finally there’s a biggest breath of fresh air with the straight-talking Sasikumar.

“Shoulderman” (for his iconic solitary goal, from his shoulder (!) when Singapore won the Suzuki Cup in 1998) or “Superman”, we now wait for the football-branded Sasikumar to formally announce his presidential candidature.

No cock and bull, please. There must be alliance and assistance in wholeheartedly rebuilding Singapore football. Yet again, I candidly appeal to the FAS “boarders”, not interested in the S-League, not keen to kick a ball with the grassroots clubs and simply flaunting their personal and/or professional positions, to graciously not offer themselves for election.

It’s time for revitalisation and revivifying to restore FAS on its 125th anniversary. It’s time for reassuring, refreshing, relieving and remedying Singapore football.

Sasikumar may well give football the biggest kick of a lifetime, simply because he has the balls to do the right stuff and even use his shoulder, if need be again after 19 years, to breathe a badly-needed new life at FAS.

The ball is in your feet, football clubs and fans, to make the right choice to have a former lion-hearted home-grown lad as the new FAS boss.