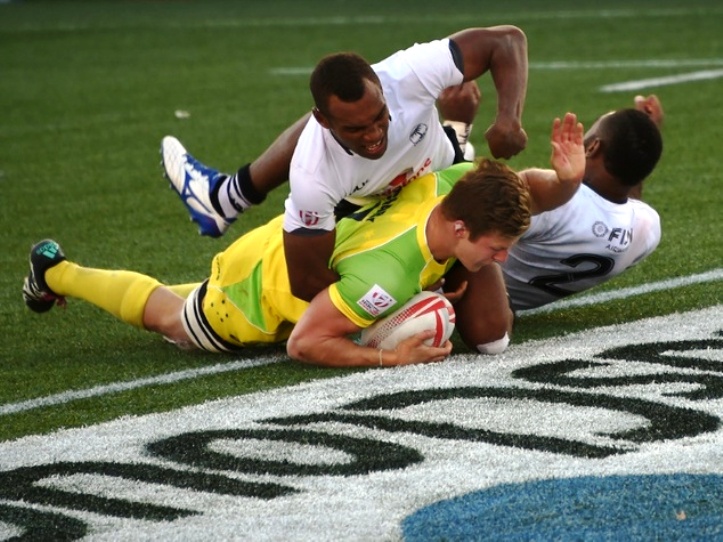 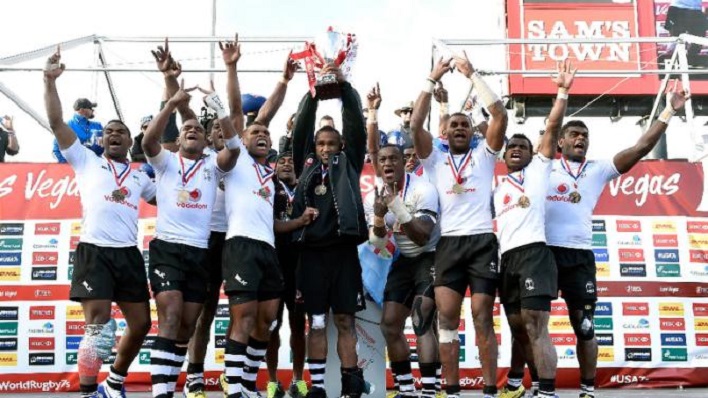 Australia looked to be on course for an upset victory at a windswept Sam Boyd Stadium after tries from Sam Myers, captain Ed Jenkins and Cameron Clark handed them a 15-0 half-time lead.

But the introduction of Fiji substitute Kitione Taliga at half-time proved crucial for Fiji, with the pacy back conjuring two tries out of nothing to haul the South Pacific islanders back into the match.

Taliga’s first try came with Fiji camped on their own line, with the speedster spotting a gap and darting some 95 meters to score under the posts. Moments later Taliga went clear again, galloping over under the posts for a converted score to cut Australia’s lead to 15-14.

Australia responded strongly but were again undone by another Fijian long-range effort.

This time it was wing Savenaca Rawaca who applied the coup de grace, the newly signed Saracens player shrugging off a weary Australian tackler to run virtually the length of the pitch to score to help make it 21-15.

“The wind made it an awful game of rugby but second half we fought back and I’m really proud of the boys to get a win in the conditions,” said Fiji’s English coach Ben Ryan, who dedicated the win to victims of the recent cyclone in his team’s homeland which has left at least 44 people dead.

“We’ve had a hard time with the cyclone, people have lost their livelihoods. I hope we put a smile on some people’s faces this weekend,” Ryan said.

Earlier, Australia had battled through to the final after a bizarre semi-final win over South Africa which saw them advance after being awarded two penalty tries.

South Africa looked to have done enough as they led 12-7 with just seconds remaining and Australia down to six men after Quade Cooper’s sin-binning.

However Cooper returned to join one last attack for the Australians which ended with captain Ed Jenkins hauled down short of the line after a high tackle by South Africa’s Rosco Specman.

Specman was given his marching orders for the tackle and Australia were awarded a second penalty try of the game which was duly converted by Cooper for a nail-biting victory.

It capped a miserable match for Specman, who had earlier been sin-binned for another high tackle which saw Australia earn their first penalty try of the game.

Fiji, the reigning world sevens series champions, were always in control with Jasa Veremalua, Vatemo Ravouvou and Pio Tuwai all dotting down for tries.

The United States fought back with tries from Danny Barrett and former American football player Perry Baker but all too often were undone by basic errors as they sought to build momentum against the Fijians. – Agence France-Presse