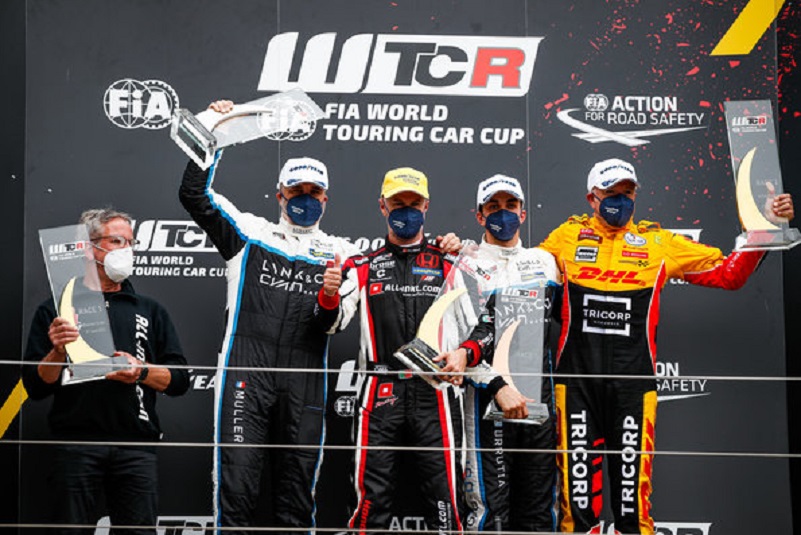 Gilles Magnus leads the Trophy standings ahead of Tom Coronel

The new second-generation Audi RS 3 LMS clinched its first World Cup trophies on its racing debut. Privateer Tom Coronel won the Trophy classification in the first sprint at the opening round of the 2021 FIA WTCR season at the Nürburgring, while Gilles Magnus decided this class in his favor in the second sprint.

After a fight to catch up, the Frenchman Nathanaël Berthon secured sixth place at the end of the race weekend and thus the best result for Audi Sport customer racing.

“After more than 5,000 test kilometers we were looking forward to this race debut,” says Chris Reinke, Head of Audi Sport customer racing.

“The Nürburgring Nordschleife was a tough test. A big thank you to our development engineers, to Comtoyou Team Audi Sport, our drivers Nathanaël Berthon and Frédéric Vervisch as well as their privateer driver colleagues Tom Coronel and Gilles Magnus. With 37 championship points on their debut, they earned us a countable result on which we can build.” Already in the first sprint, touring car legend Tom Coronel showed what was possible from the eleventh starting position. Over the course of three race laps, the Dutchman improved to seventh position. In the process, he left last year’s world champion Yann Ehrlacher behind and won the Trophy classification for privateers ahead of his Belgian teammate Gilles Magnus and three other competitors.

In the second sprint, all four Audi drivers avoided a midfield turmoil. From twelfth on the grid, Nathanaël Berthon improved to seventh position, followed by Gilles Magnus and Tom Coronel. On the last of three laps, Berthon overtook former world champion Yvan Muller.

So the 32-year-old pro driver recorded the best result of the weekend for the Audi RS 3 LMS in sixth place. Gilles Magnus won the Trophy classification in ninth place overall ahead of Tom Coronel. Frédéric Vervisch was forced onto the grass by a competitor at high speed and retired with a damaged radiator.

In the FIA WTCR Trophy standings, 21-year-old junior driver Gilles Magnus leads the field by one point ahead of Coronel. After the first of eight World Cup rounds, the team and drivers have a three-week break before the second round in Estoril, Portugal.

Audi Sport customer racing has unveiled the Audi RS 3 LMS in February and is developing the new entry-level touring car in tests and in FIA WTCR races for customers around the world. Deliveries will begin in the second half of the year. The brand has produced 180 cars of the predecessor model, which have clinched 55 titles worldwide from 2017 to date.