Home International Five from five for brilliant Rea at Aragon 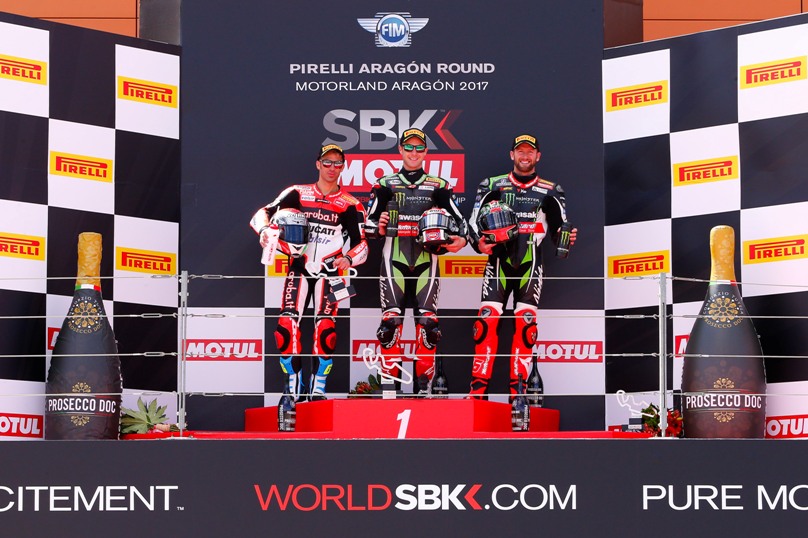 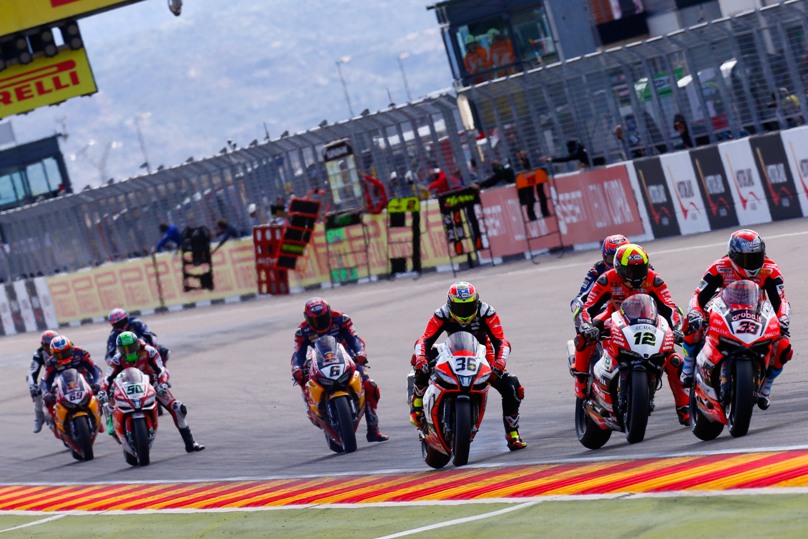 Rea wins Saturday race after duel with Davies who crashed out late, as Melandri and Sykes complete the podium

Rea made it five wins from five this year after putting pressure on provisional race leader Davies for most of the race, with Ducati’s Welsh rider crashing out at the penultimate turn of the penultimate lap. The victory puts Rea 47 points clear of Sykes at the head of the championship.

Melandri was another beneficiary of Davies’ unfortunate crash as he crossed the line in second, the Italian outpacing Sykes as the pair battled for prominence. Sykes’ third place in the race moves him up to second in the general standings.

Ayrton Badovini (Grillini Racing Team) retired early in the race due to a technical problem with his Kawasaki ZX-10R.

Xavi Fores (BARNI Racing Team) was forced to stop in the final stages due to a technical problem which caused his Ducati Panigale R to catch fire. It was an disappointing end to Fores’ race after he had remounted and battled on having crashed early on when fighting for fourth with Sykes at turn 1.

Leon Camier (MV Agusta Reparto Corse) was 11th and Markus Reiterberger (Althea BMW Racing Team) did well for 12th after starting from pit lane due to an issue before the race.

Sunday’s WorldSBK Race 2 at the Pirelli Aragón Round will commence at 1pm local time (GMT +2).

1st – Jonathan Rea (Kawasaki Racing Team) “I rode the strongest race I could; Chaz was strong in areas where I was not, and I was strong in areas where he was not, so it was a case of me learning a lot in the race. The only thing I could do in that race was ride shotgun and put as much pressure on as I could and wait for a mistake. The door opened up a few times because Chaz missed a few apexes but finally he went down in the penultimate lap. I hope Chaz is OK but for me it was a perfect opportunity to win another race”

2nd – Marco Melandri (Aruba.it Racing – Ducati) “I was a very tough race because everyone expected to have warmer temperatures to use the softer rear tyre but this was impossible, everyone’s bike were completely different to the practice and for me it was not easy. I couldn’t have the speed that I would like to have and to be second is a big result for me.”

3rd – Tom Sykes (Kawasaki Racing Team) “Sometimes you get gifted things in racing but we were working hard. The start of my day was very bad because I woke up about 04.00 this morning with some kind of sickness and suffered in the race. In the wind I just suffered a little bit with the turning of the bike, so the rear traction was critical. Because the bike would not turn I was over-stressing the rear tyre. From that point of view, tomorrow we will have another go.”