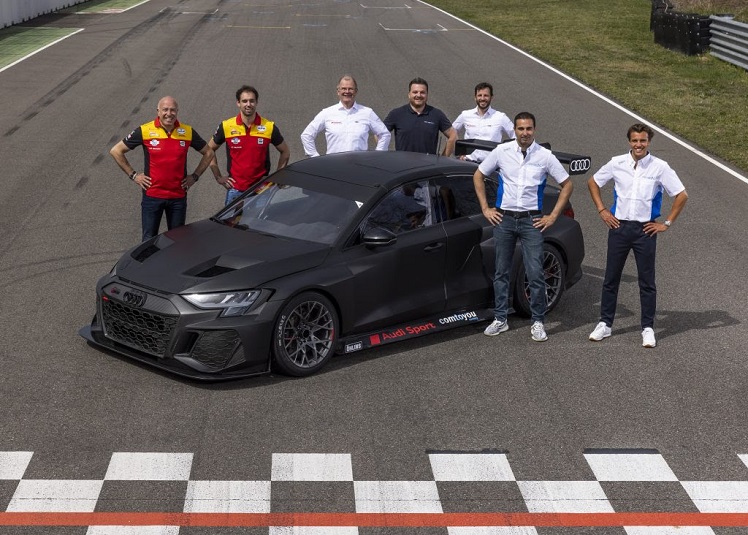 It has retained existing trio Nathanaël Berthon, Tom Coronel and Gilles Magnus and re-signed Mehdi Bennani, who won the TCR Europe title as a driver in 2020 and helped the Belgian squad to the teams’ award in the process.

Berthon and Coronel will compete under the Comtoyou DHL Team Audi Sport banner, while Bennani and Magnus will represent Comtoyou Team Audi Sport when the 2022 season gets underway at Circuit de Pau-Ville in France next month (May 7-8).

Frenchman Berthon is part of the Audi Sport customer racing official driver squad with Magnus joining the programme for the first time, having claimed the WTCR Trophy title and a breakthrough outright WTCR victory in 2021.

Moroccan Bennani, a race winner in the WTCR and the FIA World Touring Car Championship before then, is eligible for the WTCR Trophy for racers competing without financial support from a customer racing brand. Dutchman Coronel, last season’s WTCR Trophy runner-up, will enjoy the same status.

“We want to continue the successful streak of the Audi RS 3 LMS in 2022,” said Chris Reinke, Head of Audi Sport customer racing. “Three race wins, 12 podium places, four times first on the grid, six fastest laps and the contribution of these successes to the TCR Model of the Year convey a clear message. With Comtoyou Racing as a reliable and competent partner, we are banking on continuity.”

Since the WTCR began in 2018, Comtoyou owner Jean-Michel Baert and Team Manager François Verbist and the squad from Waterloo, south of the Belgian capital Brussels, have so far brought the Audi RS 3 LMS to the grid in each of the 92 races.

Baert said: “I am very proud of what my team has achieved since 2017, and not always in easy conditions. François Verbist has managed to assemble once again a very competitive line-up, which is a mix between official Audi Sport drivers and private drivers. After a full year of development, we are back for the second season with the new Audi RS 3 LMS which we got to know even better during the winter tests. Thanks to Audi Sport, Chris Reinke and Andrea Milocco, as well as to Detlef Schmidt, for the excellent collaboration that we have had since the first races in TCR International. We are certainly even better prepared than in other years, we will fight for both titles.”

Verbist said: “Since the start of Comtoyou Racing, with Jean-Michel, our goal has been to work on continuity and loyalty with our drivers and partners. This is why I am very happy to be present in WTCR for the fifth season in a row with Audi Sport as main partner. Being able to continue this adventure with Gilles, Nath and Tom was a logical and desired continuation. For the fourth driver, I am very happy to have Mehdi back after our 2020 TCR Europe title, also in an Audi. Our pre-season tests went well and I am completely satisfied with the work of our technical team and the performance of my four drivers. I can’t wait to be in Pau to rub shoulders with the competition.”

In Berthon, 32, Comtoyou can count on the expertise of a driver who undertook development work on Audi’s second-generation RS 3 LMS in 2021 and has experience of three WTCR seasons.

Magnus, 22, is in his first season as part of the Audi Sport driver squad. He won a selection competition organised by the Belgian ASN, the RACB, at Audi’s headquarters in Neuburg in 2018. After graduating from TCR Europe, Magnus finished 2020 as the WTCR’s top rookie driver and went on to win outright at WTCR Race of Hungary last August.

Fan favourite and FIA World Touring Car racing stalwart Coronel is Audi-powered for a third WTCR season in a row and will combine his world series bid with a TCR Europe campaign also run by Comtoyou. Having recently celebrated his 50th birthday, DHL-backed Coronel is about to embark on his 33rd season of competition.

Bennani famously became the first Arabic driver to win an FIA world championship motor race, a feat he achieved at WTCC Race of China in 2014. Since then, the 38-year-old was part of the Sébastien Loeb Racing line-up for five seasons, including three in WTCC and two in WTCR before he claimed the TCR Europe title in a Comtoyou Racing-run Audi RS 3 LMS in 2020.

The 2022 WTCR season gets underway at Circuit de Pau-Ville from May 7-8.