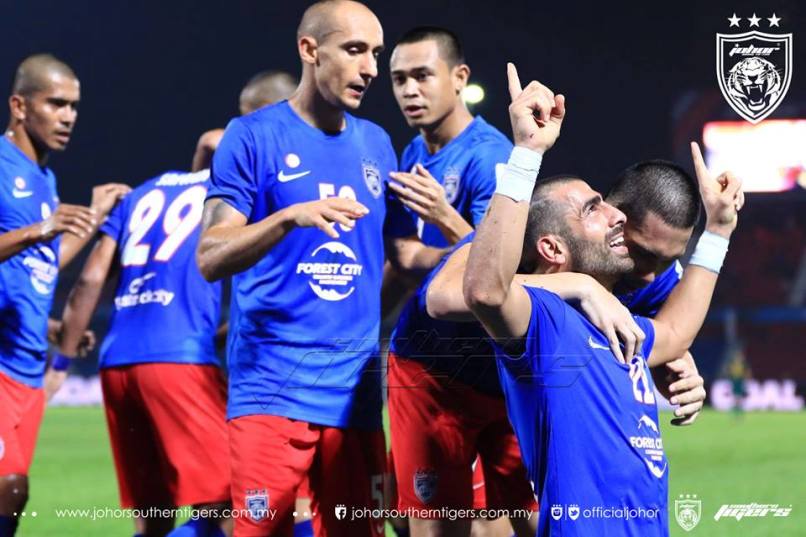 There is no stopping  Johor Darul Takzim as the defending champions ran riot to run up a massive 6-1 win over T-Team in Saturday’s Super League match at the Sultan Ismail Nasiruddin Shah Stadium in Kuala Terengganu.

The Southern Tigers are now in comfort zone with 42 points from 17 matches – 11 points ahead of second placed Kedah who have 31 points following a 2-0 win over bottom placed Penang.

The three-time Super League champions went into overdrive as early as the 22nd minute when Argentine hitman Gabriel Guerra opened the flood gates and ended the first half with a 3-0 lead before the break.

Mohammad Ghaddar made it 2-0 after 40 minutes and S. Kunanlan was on target three minutes later. Guerra completed his brace on 58 minutes followed by Fadhli Shas’s 77th minute goal before Gonzalo Cabrera completed the scoring. The Titans netted their consolation goal off a penalty through Yannick N’Djeng in the 83rd minute.

Pahang, who had their head coach Dollah Salleh suspended 18 months and also fined for criticizing match officials following a 2-1 defeat at the hands of Felda United on July 4, put their troubles behind them for a 2-0 win over relegation threatened Melaka United at home.

Playing at home at the Darulaman Stadium in Kuantan, the Elephants got their goals through Yamil Romero (4th) and Mohamadou Sumareh (52nd).

Felda United fell to a 1-0 defeat to Perak at the Perak Stadium in Ipoh with Yashir Pinto getting the winner and three points via a penalty in the 11th minute.

The defeat saw The Fighters drop to fifth place in the league with 26 points as Selangor moved up to fourth with 27 points after a 1-0 win over Kelantan at the Selayang Stadium.

It was Amri Yahyah again for Selangor as he got his name into the scoresheet with a 19th minute goal. It was Amri who scored the winner for the Red Giants in their upset 3-2 win over JDT in a Malaysia Cup match on Tuesday. – BY RIZAL ABDULLAH