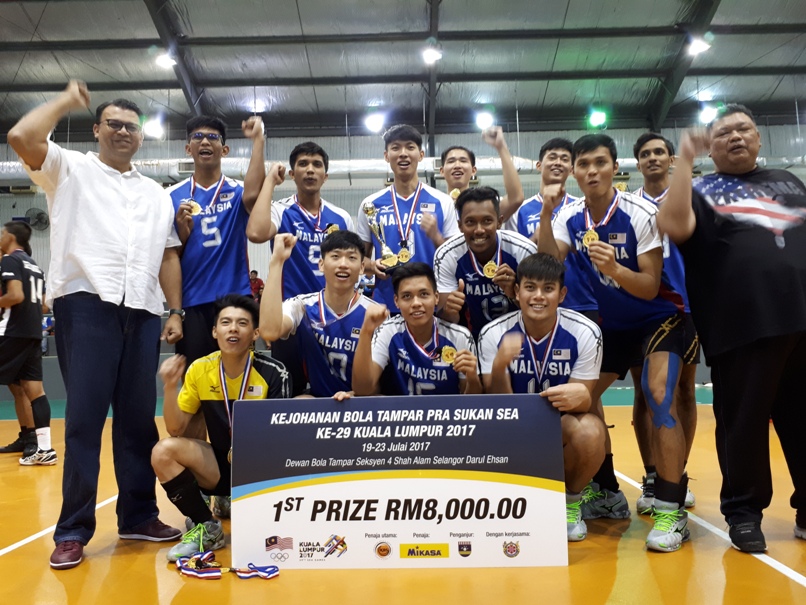 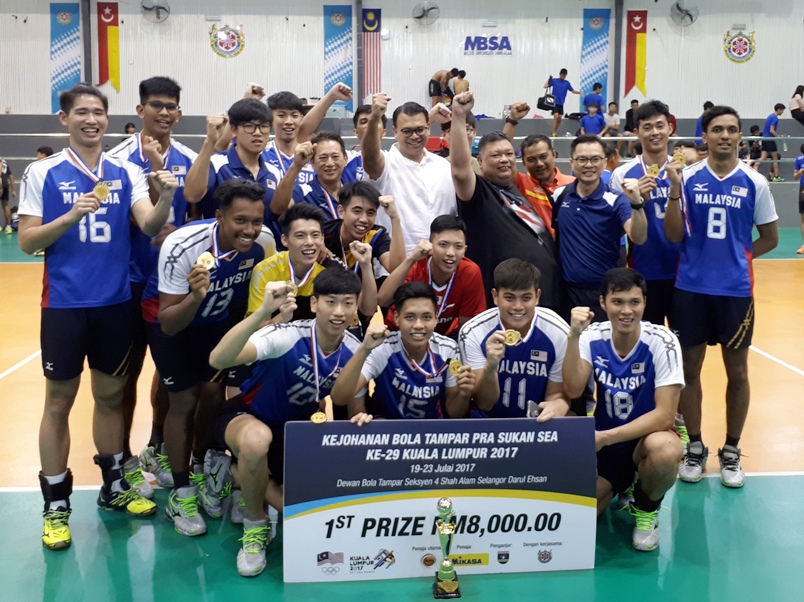 It was good news indeed for the Malaysia men’s volleyball team when they rose to the occasion to win the pre-SEA Games Volleyball Championship after beating MBSA-Thailand’s Air Force Volleyball Club – with a narrow 3-2 score line at the MBSA Indoor Volleyball Court in Shah Alam.

Not only that skipper Sim Jian Qin – who was sidelined during the tournament – is on his way to make a return to the national scene after two weeks of absence from an ankle injury.

“I had stopped training since my injury which was two weeks ago. For now, I haven’t really started my training yet. Basically it’s just light movements around the court.

“But judging from the way I feel, I think I should be fully fit before the actual Games,” clarified Sim.

Immediately after the recently concluded Pre SEA Games event, Malaysia will be heading to Taiwan next for training and friendlies from 24 July – 3 Aug in preparations for the KL2017 Games in August.

However, with the Taiwan national team competing in the on-going Asian Volleyball Championship from 24 July – 1 Aug, Malaysia have sourced out other options which includes teams from the professional scene.

According to the 22-year-old, who has been with the national team since Oct 2015, Malaysia will meet the likes of Taiwan’s professional league champions – Taiwan Power.

In addition, the Taiwan Army team and High school league champions – Fu Cheng High School – will be included as well.

“The standard of volleyball in Taiwan is better as compared to the Southeast Asian region.

“So our main objective would be to learn something from them and improve our tactics as we attempt to beat the defending champions Thailand.

“Our target is to meet Thailand in the final. So playing in Taiwan, I believe we will meet stronger opponents. And as we play with better teams, we will improve,” said Sim.

Sim was also pleased to have the presence of seniors – Cheoh Jia Ming, Mohd Aizzat Zokri, Yap Kent Bin and Ranjit Ramu – to help guide and lift the spirit of the juniors.

“I definitely think it will be a boost for the team with the seniors around as they are experienced playing in many international meets.

“They would be more composed and less nervous as compared to the juniors who had joined this year.

“I hope in the near future we would have a volleyball league to help raise our standards. The league would serve as a platform and to source new talents and the seniors would be able to continue with their progress.

“Unlike now, after our graduation we may have to stop playing once we have our commitments,” added Sim.

The 31-year-old veteran, who plays for the Thai league club Nakhon Ratchasima, and a few other Thai national atheletes were specially invited by the AFVC to play for the team.