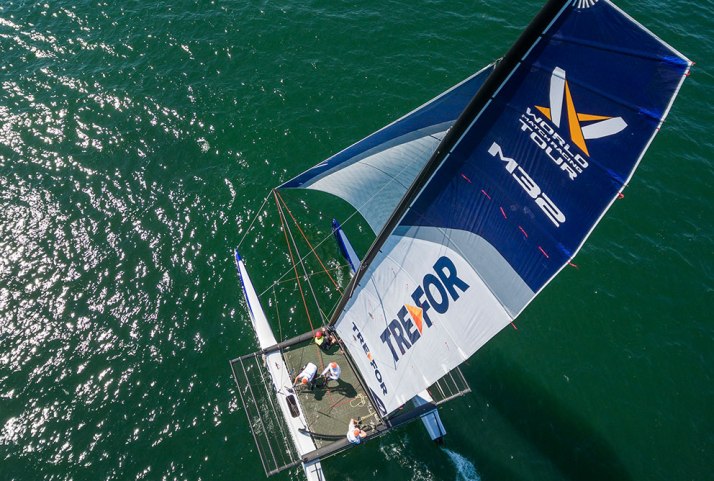 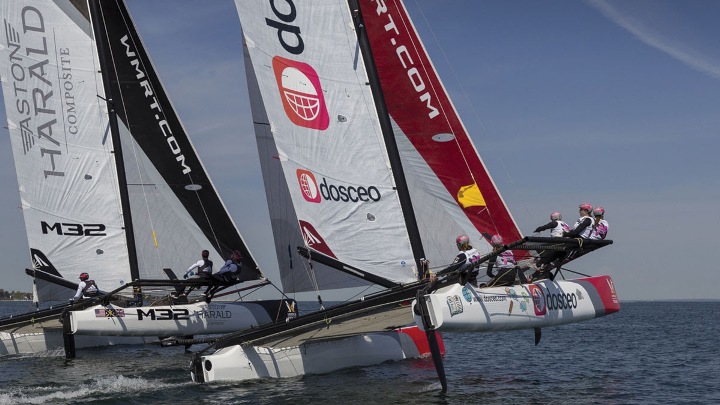 Sally Barkow (USA), Team Magenta 32, was seconds away from eliminating Taylor Canfield (USA), US One, from the World Match Racing Tour Copenhagen today in a thriller of a Quarter Final. But a gust from heaven dragged US One back into the game and gifted Canfield a last-gasp ticket to the Semi-Finals.

The match racing here has been characterised by the most unlikely and unpredictable lead changes. Winning the start used to be everything in traditional match racing. Here, it’s nice to have, but it guarantees nothing. The America’s Cup style boundaries are changing the game massively and when the sailors aren’t racing, they are avidly watching the other matches to learn whatever they can about this new format of gladiatorial combat.

Every neutral on the shore was cheering for Barkow and the all-girls Team Magenta 32, willing the women to give Canfield a bloody nose, but it wasn’t to be. “Thanks for all the support, we could hear you all,” said the American Volvo Ocean Race and Olympic veteran to the appreciative crowd. “That last run of that last match was really tough. We’ll probably go back over it a million times asking ourselves what we could have done differently. It’s hard to know when to cover or go across their bow to the other side.”

Yesterday Canfield had been less than complimentary about the level of racing displayed in the ding-dong battle between Barkow and Johnie Berntsson (SWE), Flux Team. But today he and his crew had developed a new level of respect for their female rivals. “The girls sailed really well,” he said. “But for us, not giving up was the key. We had two last-minute passes that won us those matches. Staying focused was what it was all about. Everyone got a bit lucky today, but we definitely got the last of the luck.”

Ian Williams’ (GBR), GAC Pindar, luck ran out in his Quarter Final battle against Yann Guichard (FRA), Spindrift racing, the multihull specialist who proved too slick and too fast for the six-time and reigning World Champion. Had Williams been a victim of Friday the 13th? “You know me, always looking for excuses,” he quipped.

“But not that particular excuse, no. We’re not the finished article, that’s clear from this week. Yann showed us how to sail the boat.” After dropping just one match in all of the Fremantle event, it looked like Williams and his crew had mastered the peculiarities of the M32 very quickly, but the game is moving on very quickly. Copenhagen has revealed some GAC Pindar frailties and the meticulous Briton will leave no stone unturned in his never-ending quest for perfection.

Guichard was fast in Fremantle and he’s proving fast here, and Spindrift will give Canfield a good run for his money in their Semi Final tomorrow. The Frenchman who is best known for his multihull exploits – from Olympic Tornado sailing to round-the-world record attempts in giant trimarans – has recently put his crew through a 20-day match racing clinic with French America’s Cup veteran Bertrand Pacé, so the Spindrift racing crew are filling in any chinks in their armour very quickly.

Iker Martinez (ESP), Team Espana, though new to the Tour and new to match racing, is proving another fast learner. The 49er Olympic gold and silver medallist, and Volvo Ocean Race skipper, has spent the past three years campaigning in the Nacra 17 Olympic catamaran.

Even if a bad injury prevented Martinez from going to his fourth Olympics for Spain later this summer, the Nacra experience has set him up well for handling the lightweight M32 catamaran. He got the better of Mattias Rahm (SWE), Rahm Racing, in a tight battle that – like the other two battles already mentioned – also came down to the final of five Quarter Final matches. Unlike the other strong starters, once Martinez got ahead he stayed ahead.

Perhaps this is because he chooses to stand up a lot of the time while helming. “When I stand up it’s to look around you outside the boat, to do what we can to avoid the holes in the wind. At every moment I was trying to see as much as I could.” The Spaniard was certainly reading the wind well on a course that, for others, just looked like a game of pure luck.

It will be a tougher test against the fast-learning Martinez, however. Dackhammar will need to draw on all his three years of experience in the M32s to overcome the world-class pedigree of a Spanish crew stuffed with Olympic, Volvo and America’s Cup talent.

Saturday – the climax – will see the final four whittled down to the last two who will battle it out for glory in Copenhagen, and a winner’s cheque for $33,000 from a total prize purse of $200,000. Live coverage will be shown at www.wmrt.com from 1400 local Danish time.