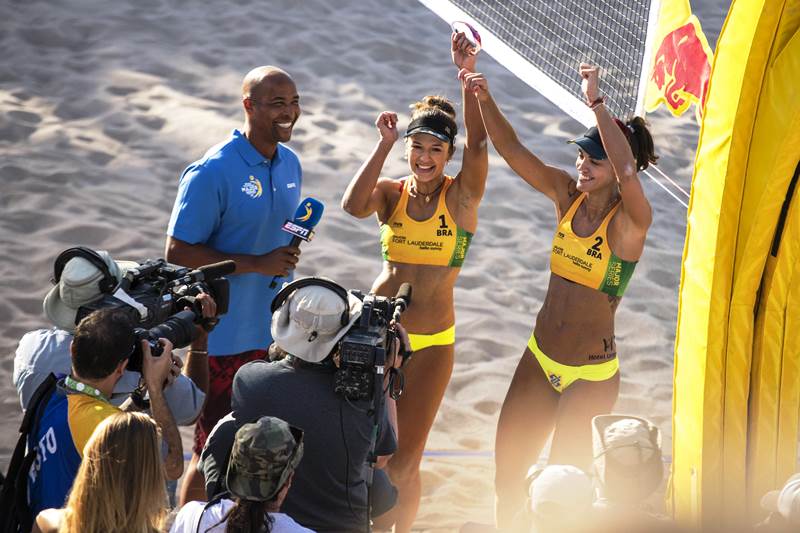 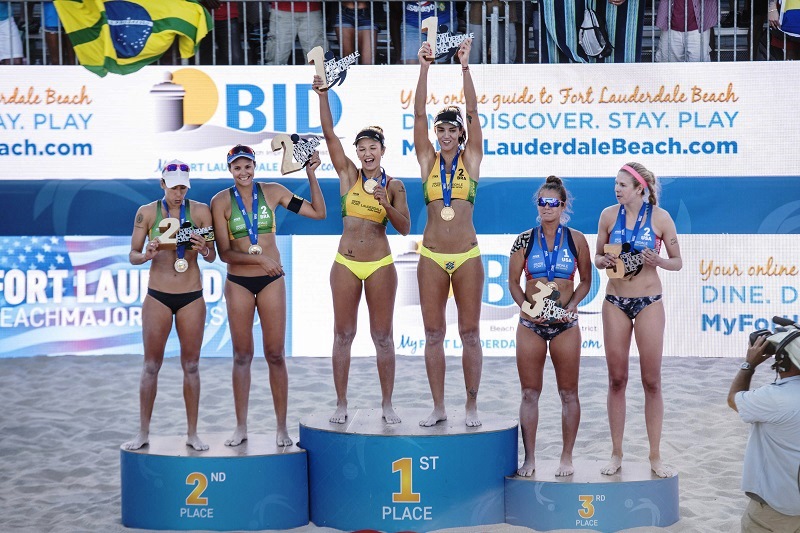 Brilliant Bárbara Seixas and Fernanda Berti Alves won the battle of Brazil in the women’s final at the Fort Lauderdale Major to take home gold and a 40,000 USD payday.

The ninth seeds were in unbeatable form all week under the Florida sun, winning all six matches, and their victory against qualifiers and compatriots Taiana de Souza Lima and Carolina Horta Máximo saw them crowned the first champions of the 2018 Beach Volleyball Major Series.

There was also joy for the United States as the home crowd celebrated a first bronze medal on home sand on the World Tour for Brooke Sweat and Summer Ross after their 21-17, 21-13 win over Germans Victoria Bieneck and Isabel Schneider.

However, the final was all about Brazil as the packed Red Bull Beach Arena crowd were treated to a beach volleyball masterclass. Bárbara, the 30-year-old 2016 Olympic silver medalist, and Fernanda, 32, won in straight sets 21-16, 21-13.

It was the winners’ second title on the World Tour as a team since they joined forces after the Rio Olympics in 2016 and their first on the Major Series together.

“My partner was on fire and so was I,” said a delighted Bárbara after the victory. “I think we learned that we should never give up and focus on every single point. It’s why I feel so passionate about the sport. It’s why I yell and scream and shout – I’m really happy.”

For silver medalists Taiana Lima and Carol Horta, playing in her first final, their journey from the country quota ended with a silver medal in their 10th match of the tournament.

“We gave all we had left, but they played better. Either way, it has been an incredible week for us,” said 33-year-old Taiana. “When Carol called me and we decided to play this tournament together, we had no idea of what could happen and here we are. It has been a great week for both of us.

“It has been special for us. To me, this silver is like gold. I will always have this week in my memory.”

Carol, 25, who stepped in at the last minute following an injury to Elize Maia Secomandi days before the competition started, said: “I always feel disappointed when I lose, but we are happy about the second place. It was an amazing result after such a long week. Competing for the gold medal after six days of tough matches meant a lot for us. We are very happy about what we did here.”

Ross and Sweat’s success in the bronze medal match came a year after they lost the fight for third. But in front of friends and family watching in the stands, the pair were thrilled to bounce back with a victory after the semifinal defeat earlier in the day.

“It means a lot to do this here in Florida,” said Sweat afterwards. “Especially after the heart-wrenching loss in the semis. We did a good job because we didn’t have much time to talk and prepare for the next match. It was more of a mental challenge for us. It was important to erase that and just let it go.”