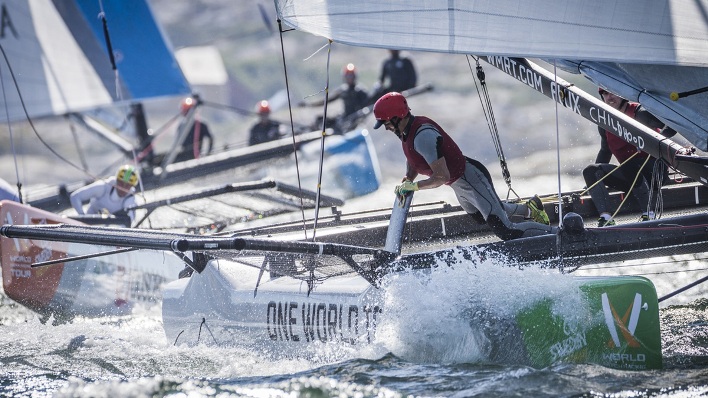 The World Championship Finals of the World Match Racing Tour opened in the best possible way today, with Marstrand delivering strong breeze and sunny skies for the 20 international teams competing in Sweden.

With so much at stake, with a $1 million bonus up for grabs for the winner, it was vital for the big players to get off to a good start in Qualifying, which consists of four Groups of five teams competing in a series of short, sharp fleet races. Off the start line and in the early stages of his four heats, Yann Guichard looked to be in trouble. But the Spindrift skipper stayed patient, relied on some sensational boatspeed as he has done all season, and battled his way through to the front, finishing the day with the best scoreline of 2,1,1,1.

The very last race of the day saw Guichard comfortably out in front towards the top of the last upwind leg when even the usually impeccable Frenchman fluffed his final tack towards the top gate mark. Sweden’s Johnie Berntsson pounced on the French error and surged into the lead on the final high-speed run towards the finish line.

But Guichard was closing fast and Berntsson made a desperate bid to shut his rival out of the finish, forcing Guichard into the boundary ropes and just metres from Marstrand’s rocky shore. Berntsson looked set to take the win but the umpires decided otherwise, forcing Flux Team to take a penalty which relegated the Swedes from first to last. Ouch! Berntsson would have been sitting in 2nd overall in his Group, but now sits in 2nd last ahead of Keith Swinton, but behind Matt Jerwood and Phil Robertson in 2nd and 3rd.

Although Guichard is undoubtedly quick, he said it’s sometimes about knowing when to take your foot off the gas to grab a tactical advantage on the tight race course. “Sometimes you have to accept that you must slow down,” he said. “Our team work was really great, a very solid day for us.”

Berntsson was by no means the only one to fall foul of penalties, and nor was he the only Swede. In another very tight battle for the finish of a Group 1 heat, Mattias Rahm was duelling with Taylor Canfield. “We could have held Taylor on a bit longer and gybed later and we probably would have won,” said Rahm. “We were a bit too nice to him, and then Taylor was quite aggressive to us.”

There was contact as US One luffed Rahm Racing and not only did Rahm take a penalty that relegated him to last place, he was given a further 2-point penalty for contact. “I think the penalty rule is a bit skewed,” said Rahm, and even Canfield agreed. “The way the rules are set up, the right of way boat is getting off the hook if there’s a collision, and the boat in the wrong is getting a 2-point penalty,” said the US One skipper. “So there are situations where it could be better for you as right of way boat to hit a competitor.”

As the tension ratchets up towards the end of the week, Canfield – who leads Group 1 after today’s scores of 1,2,5,1 – predicts more shenanigans. “There’s definitely not going to be fewer collisions as the week goes on. As we get into the match racing and the knock-out rounds, I think it’s going to get more aggressive and you’ll probably see more collisions.”

Even Ian Williams fell foul of the 2-point penalty today yet showed his class to be leading Group 2 with scores of 1,1,2(+2),2, for a total of 8 points. It has been a torrid time for Great Britain in the past week, with the country deeply divided by the Brexit vote to leave the EU, and blood on the floor of the Houses of Parliament with political suicides and assassinations. Yet the GAC Pindar skipper has risen above the problems back at home and was looking on the positive side of Brexit this week. “I think the pound to dollar exchange rate has changed a lot, so the $1m prize for the winner is worth more than it was,” he said brightly. “I voted Remain [in the EU], and I lost that one, but perhaps we can get some revenge this week.”

In Group 3, Nicolai Sehested sits tied on points with Iker Martinez for the lead. Like Guichard, the young Dane shows an incredible ability to bounce back from poor starts and bad situations. Martinez, the talented Olympic Champion and Volvo Ocean Race skipper, was pleased to have finally got some practice in the M32 before race day. “We came to Newport a few weeks ago and we were learning as we went along,” said the Spaniard.

“Here in Marstrand the team has done a few days’ practice and now we are competitive, we feel good. But you look at all the top teams and they all have their own M32 for training. For us to take the next step for next season, that’s what we need to do.”

Tuesday’s forecast looks very similar to today’s, and no one will be complaining about that. Marstrand delivered great racing for the sailors and great spectating for the crowds, who across the week are expected to be well in excess of 100,000.