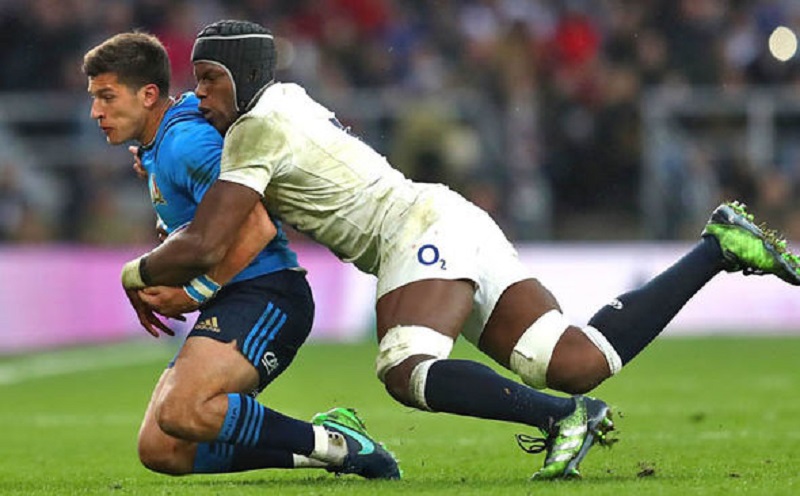 Eddie Jones is banking on his racehorse trainer-style “gut feel” paying dividends against Argentina at Twickenham on Saturday after leaving out both Owen Farrell and Maro Itoje (main pix) for England’s end-of-year Test series opener.

The Australian has omitted the Saracens duo on the grounds of their “exceptional workloads” this season, after saying he would rest some of those England players involved in the gruelling British and Irish Lions 1-1 series win in New Zealand earlier this year.

Former Australia and Japan coach Jones was glad of the way the pair had reacted to missing the Argentina match, while insisting he had no qualms over his decision.

“They hated it, which is a great reaction,” Jones told reporters at England’s hotel in Bagshot, southwest of London, on Thursday. “They hate it because they want to play every Test.”

Jones, however, added: “At the end of the day they have got to understand I run the team.

“I make the decisions. And I make those decisions in the best interests of the team and for the individual.”

As with all leading international coaches, Jones receives vast amounts of information on all his players but he insisted there was still a place for old-fashioned intuition.

“It’s a bit like being a horse-trainer. You get all this information, you see all these things but you’ve got to look at the person and see what they are ready to do.

“I can’t explain it because it comes down to my gut feel for what they need.”

Henry Slade has replaced Farrell at inside centre, while Sam Underhill starts at openside flanker.

England have won all three of their Tests against 2019 World Cup pool opponents Argentina since Jones took charge, including a 2-0 series win in two tight matches in Argentina in June.

The Pumas have had a miserable 2017 so far, winning just one out of nine Tests — against Georgia in June.

“Argentina are coming off the back of not a good season. Their coach (Daniel Hourcade) is under pressure, their players are under pressure,” said Jones.

“But they know if they beat England at Twickenham then their whole season turns around.

England and Argentina have been drawn in the same pool at the 2019 World Cup in Japan but Jones said he did not expect the outcome of Saturday’s match to have a huge bearing on events in two years’ time.

“These are all sparring matches,” said Jones. “You can win sparring matches but when you get to the heavyweight contests in the World Cup, it’s going to be a different kettle of fish.”

Meanwhile Hourcade insisted the burden of expectation was all on an England side who’ve lost just once since Jones took over following their first-round exit at the 2015 World Cup on home soil.

“You are always under pressure at the top level,” he said. “The pressure is perhaps more on England. They are number two in the world, we are number 10. If we lose it would be logical but if they lose it wouldn’t.”

Hourcade has recalled veteran fly-half Juan Martin Hernandez, a star of the Pumas’ lone previous Test win against England at Twickenham — a 25-18 success in 2006.

“We want to take advantage of Juan Martin’s experience,” said Hourcade of the 35-year-old Hernandez, nicknamed ‘The Magician’.

“Everyone knows how good a player he is. Time moves for everyone but he is a player with the capacity to adapt to any sort of game.”

But in order for Hernandez to be at his most effective, Hourcade knows Argentina must win the battle up front.

“We have a very heavy pack of forwards because we know that’s a strength of the English team,” he said.

“The breakdown will be key and I think whoever succeeds in dominating this area will have the initiative.” – Agence France-Presse