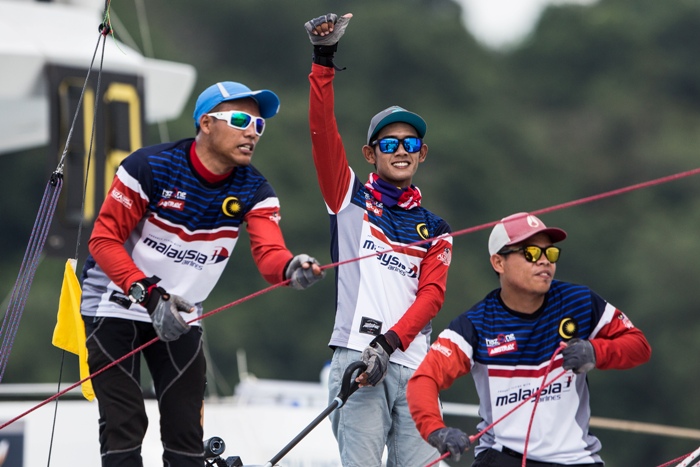 Local hero Hazwan Dermawan (MAS) wowed his Malaysian fans with another giant-killing performance in Qualifying Session two of the Monsoon Cup, as this time he dispatched world championship contender Bjorn Hansen (SWE) with a winning margin of 1 minute and 1 second.

Normally the local Malaysian team would consider itself fortunate to win just one match in Qualifying against 11 other high-calibre teams at this event, the finale of the World Match Racing Tour. After defeating the pugnacious young Australian Keith Swinton on day 1, Hazwan revised his expectations and targeted two more victories before the end of Qualifying.

Having identified Johnie Berntsson as his next scalp, the 27-year-old Malaysian did indeed run the Swede very close until making a mess of his final gennaker hoist on the run to the finish.

Even if he didn’t beat Berntsson, Hazwan later met another Swede, Bjorn Hansen, who is a hot prospect for winning the overall World Championship this season. In the afternoon racing session, strong adverse current forced crews to pick a side and hug the banks of the Straits of Johor as much as possible, creating massive splits and huge variations of fortune across the race course. The wind gods smiled on their local favourite and HazOne Racing Team beat Nautiska Racing by one of the biggest margins of the day.

Hazwan is trying to keep it simple, not get too tied up in aggressive match racing with his more experienced competitors, but just focusing on sailing the boat cleanly and quickly. “It was my luck because we didn’t get penalties,” said Dermawan, who explained his simple but effective strategy. “Sail away from him, just like Keith Swinton. Stay out of trouble. We managed to get a left shift and a big cross. From there it was maintain boat speed, keep calm and finish.”

Hansen was generous in defeat: “Hazwan beat us by half a leg, and he was very fast around the course. After losing that race we felt we had a real dog of a boat, but then we won two races in the same boat. So then we realised that he is just an extremely quick sailor!”

Almost everyone found it hard to make sense of the variable conditions, including reigning World Champion Ian Williams who could do no wrong at this venue last year when he won the Monsoon Cup at a canter. The five-time World Champion lost by 33 seconds to Reuben Corbett from New Zealand, but otherwise kept a clean sheet to go 4-1 on wins/losses.

The on-board audio from the live TV feed revealed some high stress levels among the sailors, and surprisingly none more so than on board US One skippered by the usually calm and collected Taylor Canfield. This week the 2013 World Champion is sailing with Bill Hardesty as his tactician, and it’s a very vocal and at times tetchy relationship between these two great sailors, who together won the 2014 Etchells World Championships when Canfield crewed for Hardesty.

This time Canfield is the boss, although Hardesty still makes his views known when he disagrees with his skipper. It was clear that Hardesty felt Canfield was interfering in his tactical role and that he should just get on with driving the boat fast. “What’s the problem?” asked Canfield, even as US One held a comfortable lead in one match. “My problem is you’re gonna suck, because you’re not doing your job properly,” Hardesty fired back.

If any of their rivals senses a chink in the armour of US One, then the bad news is that they are the only team to have gone unbeaten so far, sitting at the top of the leaderboard on 8-0. When Canfield was pushed to talk about his love-hate relationship with Hardesty, the US Virgin Islander quipped: “Bill can be a bit stubborn, so all you have to do is do what he’s asking a couple of times, then you lose some, and he gives in a little bit. But seriously, the whole team was great today, almost spot on all day.”

Williams has won Match Racing World Championships with Hardesty as his wing man, although the British sailor was in no mood to praise his old team mate. Instead he seized the opportunity to wind up his American rivals. “Taylor’s dead right, you just have to ignore Bill most of the time and you’ll do pretty well.” Hardesty is made of tough stuff, so he’ll take the verbal abuse well enough, knowing that if he wins this week it will be his third keelboat world title of the past 12 months, having also been part of the world-beating J/70 and Melges 20 teams, and sitting on a career tally of 12 world championship victories.

The end-of-day press conference in the lavish setting of Hotel Jen in Puteri Harbour is gathering a big audience, and the biggest cheer of the day was for the local hero Hazwan Dermawan. Having so far got the better of Swinton and Hansen, he was asked who was the target for Qualifying Session three. “Anyone will be my target tomorrow,” grinned the diminutive Dermawan, whose stature in world match racing is growing by the day.

For the latest standings and scores on the Monsoon Cup –http://wmrt.com/component/wmrt/event_results/105.html