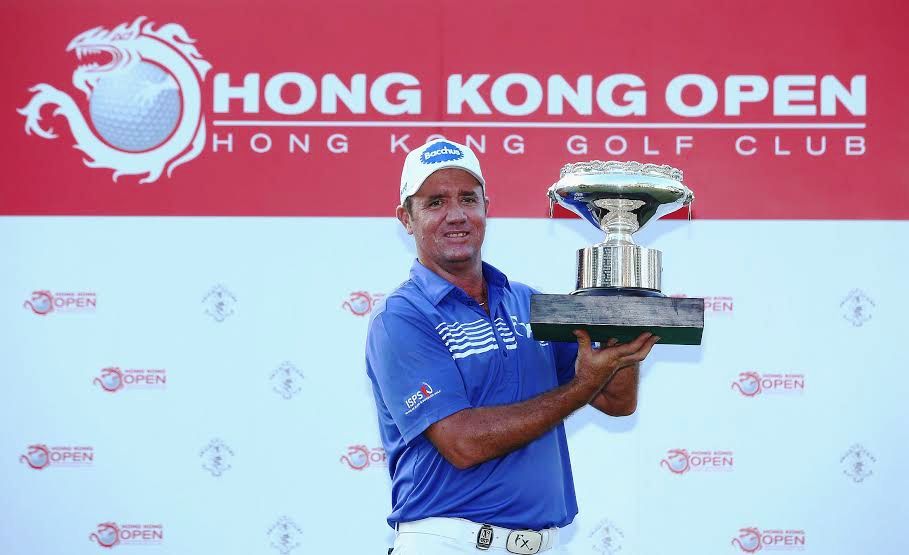 Australian Scott Hend joined the pantheons of greats at the Hong Kong Open when he claimed the prestigious title following a play-off victory over a brave Angelo Que of the Philippines on Sunday.

Big-hitting Hend coolly holed a five-foot par putt at the 18th green in the first extra hole at the venerable Hong Kong Golf Club after Que bogeyed following a poor chip from the greenside.

It was Hend’s sixth Asian Tour victory and his first on the European Tour, which was worth US$216,660. He joins an illustrious list of Hong Kong Open champions which includes Major winners Bernhard Langer, Greg Norman, Peter Thomson, Tom Watson, Jose Maria Olazabal, Padraig Harrington and Ian Woosnam.

Victory was sweet for the Aussie as he produced a wonderful par save from a plugged lie in the greenside bunker on 18 during regulation play to sign for a closing three-under-par 67 and tie Que on 13-under-par 267 aggregate.

The bubbly Filipino had set the clubhouse target after a fine 66 which included a memorable birdie at the closing hole, called The Ultimate, which would rank amongst the great birdies produced over the years at the famous hole.

With his win Hend emerged as the first Australian winner in Hong Kong since Norman’s victory in 1983. He is also the first Asian Tour member to win the event since Lin Wen-tang’s triumph in 2008.

“I felt quite calm. The only thing is that you don’t want to go for the pin on 18 as you can make bogey quite easily. I wasn’t sure how to play it and we (with his caddie Tony Carolan) discussed it and we said we’ll play it like how we would in regulation play. Unfortunately, Angelo made a bogey … I would rather see one of us make a birdie as he’s a great guy and it would be nice to win a play-off with a birdie. However, I’ll take the win. I’m ecstatic.”

Starting the day one back of the lead, the 41-year-old toured the front nine in level par with two birdies against as many bogeys but birdies on 10, 12 and 14 pushed him into contention before holding off Que in extra time. He said the par save on the 72nd hole was crucial.

“The one on 18 was especially tough considering the situation. I knew what I had to do. I had missed a chance to take the lead on 17 and I knew I had to get up and down. It’s a tough hole, no matter if you’re playing it in a practice round or tournament. I’m just very happy to get this done. “This one is for my kids (Aston and McLaren). They have been sending me music messages the last three mornings. So yeah, it’s very much to be treasured.”

Que was disappointed to miss out on his fourth Asian Tour victory but found consolation with the fact that his runner-up cheque of US$144,440 pushed him into sixth place on the Order of Merit which earned him a place in the CIMB Classic in Malaysia in two weeks’ time.

“It actually panned out better than I thought. I had a chance to win, yeah, I did, but I didn’t win, so just move on.  That’s how it is. There’s only one winner. Unfortunately I bogeyed the last (in play-off),” Que lamented.

He birdied 12, 13 and 14 before producing a magnificent birdie on the closing hole when he hit it to within a foot with a nine iron from 150 yards in the left rough.

“I think I hit the shot of my life on the last hole, so I can’t complain. It was one of those shots where either you hit it or you don’t and it ended up about six inches from the hole. I couldn’t have asked for a shorter birdie putt on the last.

“Going down the last hole, my goal was just to make par and finish second because I know how good Hend is. I didn’t give the title to him. I just hit a bad chip and that’s life. You move on and learn from it,” said Que.

Ireland’s Kevin Phelan closed with a 66 for third place while England’s Mark Foster was a further shot back in fourth position. South African star Ernie Els (69) settled for a share of fifth place on 271 after struggling with a hip injury. The four-time Major champion was tied with with India’s S.S.P. Chowrasia (67) and overnight leader Marcus Fraser, who faded with a 72.

“It’s been bothering me for a while and it really got worse on the flight over here.  But I’ve got guys working on me. It is bothering my driving and irons. The lower I go down, the more it catches. You know, I’m trying to loosen it up, but it’s really sore,” said Els.

“It really hindered me coming in.  You don’t know if it’s going to stay behind or come through.  It’s been a bit of a problem,” he added.

Scores after round 4 of the Hong Kong Open Championship 2014 being played at the par 70, 6699 Yards Hong Kong GC course (a- denotes amateur):