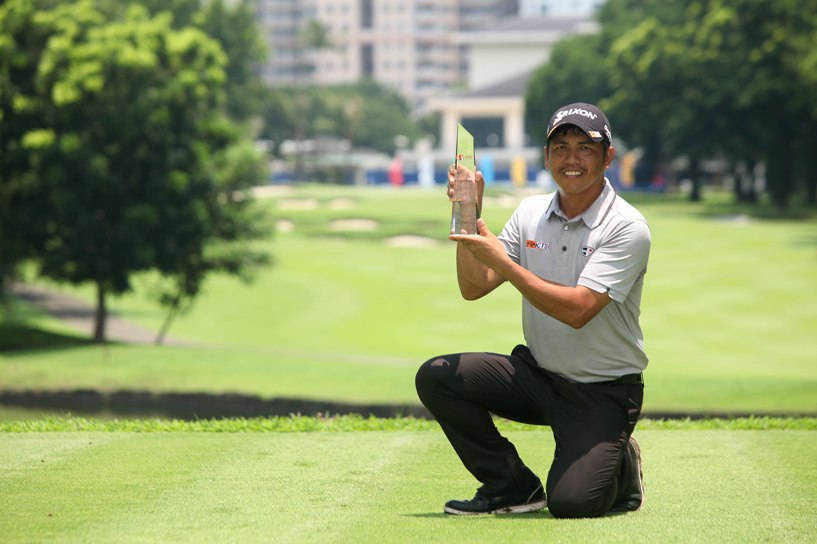 Local stalwart Jay Bayron delighted the home crowd when he closed with a two-under-par 70 to win by two shots for his second Aboitiz Invitational title as well as his fourth Asian Development Tour (ADT) win on Saturday.

Bayron, who won the tournament when it was inaugurated in 2011, fired four birdies against two bogeys to tame the notorious Wack Wack Golf and Country Club’s East course with a winning total of six-under-par 282 in the US$100,000 ADT event.

Olympic-bound Gavin Green signed for a 69 to settle for second place while Thailand’s Rattanon Wannasrichan came in one shot back in third following a similar 69 in what is the 18th leg of the ADT schedule this season.

Indonesia’s George Gandranata (70) finished in fourth place with Asian Tour regular Antonio Lascuna (71) of the Philippines on 286 while overnight leader Nicolas Paez of the United States slipped to tied-sixth place on 288 following a disappointing 77.

Bayron was overjoyed to end a four-year title drought on the ADT, where he had topped the Order of Merit in 2012 thanks to two victories that season.

“I am very happy. It’s been a while since I last won on the ADT. I came into this week feeling good because I have won this tournament before and I have had some good finishes on this course. I am glad I managed to pull it through and get the job done,” said the 37-year-old Filipino.

Bayron started with a bogey on first but gained it back on fourth before hitting his best shot of the day on par-four ninth where he chipped in from 30 yards for birdie to turn in 35. He traded two birdies against one bogey on his way home.

“That chip-in birdie on ninth got my momentum going. I got a lot of confidence heading into the back nine, which was more difficult. My short game was really good today. I guess that was the key for me,” added Bayron, who took home a winner’s prize purse of US$17,500.

Despite missing out on his fourth ADT victory and a crucial third win of the season which will give him playing rights on the Asian Tour for the remaining of 2016, Green found consolation in his runner-up finish as it propelled him to the top of the Order of Merit for the first time this season.

The 22-year-old Malaysian soared with an eagle-two on first before marking his card with four birdies against three bogeys.

“I didn’t expect to eagle the first. I had a perfect number with my pitching wedge. I hit it to about 146 yards and it was perfect as the ball hit the green, took a bounce and rolled about three-feet into the hole. It was a superb start,” said Green.

“I just kept it going. I hit it solid again. Jay (Bayron) played really good out there. I made some mistakes coming in but overall it was good. It sets me in a good shape for Olympics next week. I am happy with how I played,” Green added.

Rattanon was thrilled to cap his best efforts of the week with a bogey-free 69. “Everything was good for me. I didn’t make any mistakes. I am happy to sign for a bogey-free round. The conditions were slightly easier I thought. It was less windy and the greens are softer. I am very happy with my performance this week,” said the 21-year-old Thai.