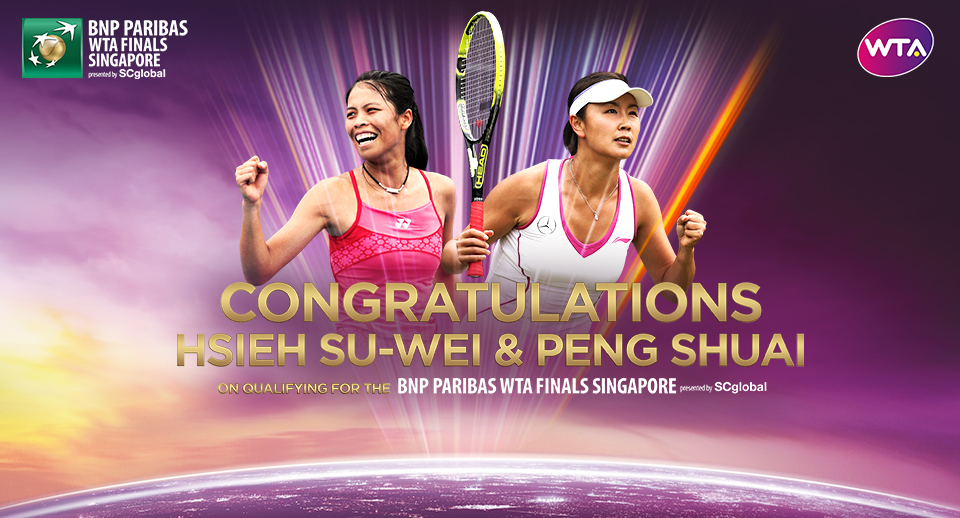 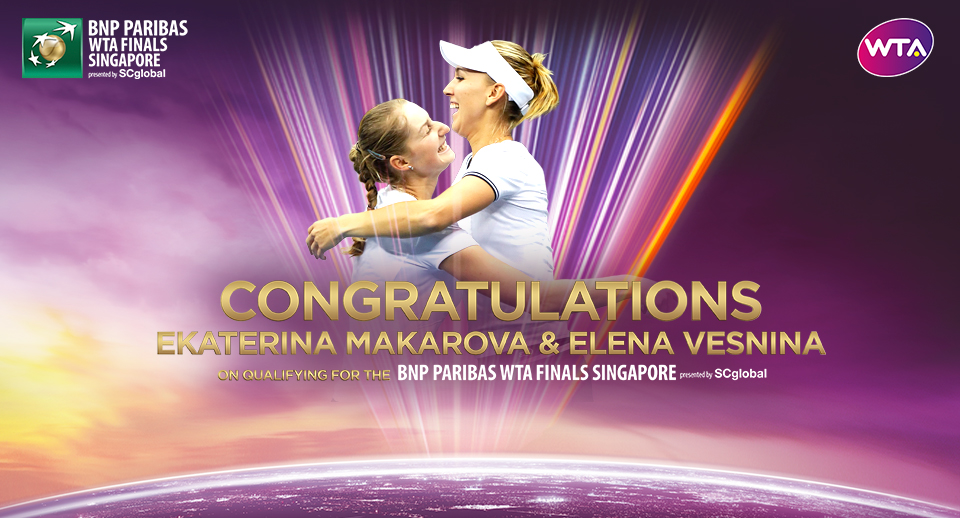 Defending champions at the WTA Finals, Hsieh/Peng reached the No.1 doubles ranking earlier this year, becoming the first Asian team to hold the top spot. In 2014, the pair won titles at Roland Garros, BNP Paribas Open (Indian Wells) and Qatar Total Open (Doha). As a team they own a perfect 12-0 record in finals throughout their career and return to the WTA Finals for the second consecutive year.

Makarova/Vesninahas registered theirbest season as a team highlighted by a title at the US Open, and runner-up finishes at the Australian Open and Miami Open. They also achieved quarterfinal efforts at the Dubai Duty Free Tennis Championships, BNP Paribas Open (Indian Wells), Internazionali BNL d’Italia (Rome) and Rogers Cup (Montreal). They return to the WTA Finals for the second consecutive year, having finished as runners-up in 2013.

The 2014 WTA Finals will feature the Top 8 singles players competing in a round-robin event, while the Top 8 doubles teams will be competing in a single-elimination draw. For the latest RoadtoSingapore leaderboard as of Monday, September 8, for singles and doubles, visit wtatennis.com.

WTA Finals Legends Ambassador Martina Navratilova on Hsieh/Peng: “Hsieh and Peng already know what it takes to win on the biggest stages. Their distinctive style, both playing double-handed off both sides, gives their opponents real headaches but is a lot of fun to watch. The fans in Singapore are in for a real treat.”

WTA Finals Defending Doubles Champion, Peng Shuai: “I am very excited to make the WTA Finals in Singapore. The last couple of years in China, tennis has become more and more popular. This is the first time the WTA Finals will be in Asia – and Singapore is a really interesting city. Last year, my partner [Hsieh Su-Wei] and I had a really good tournament and a lot of good memories.”

2014 US Open Doubles Champion Ekaterina Makarova: “Reaching the WTA Finals was a very big goal for us this year. We were able to qualify last year and we really love the atmosphere at the WTA Finals. We really wanted to qualify to play in Singapore at a great new destination and new venue.”

2014 US Open Doubles Champions Elena Vesnina: “It’s exciting to have the Top 8 teams competing to reach the WTA Finals this year. We were fortunate to be able to qualify last year. This year, it’s great to have a new  expanded field. It’s great for the fans to be able to see the best of the best competing at the WTA Finals and we really want to do our best.”

Tickets for the general public can be purchased through Sports Hub Tix wtafinals.sportshubtix.sg, the official ticketing partner of the 2014 BNP Paribas WTA Finals Singapore presented by SC Global. For more information log on to the WTA Finals website www.WTAFinals.com, Twitter (@WTAFinalsSG) and Facebook (facebook.com/WTAFinalsSG).