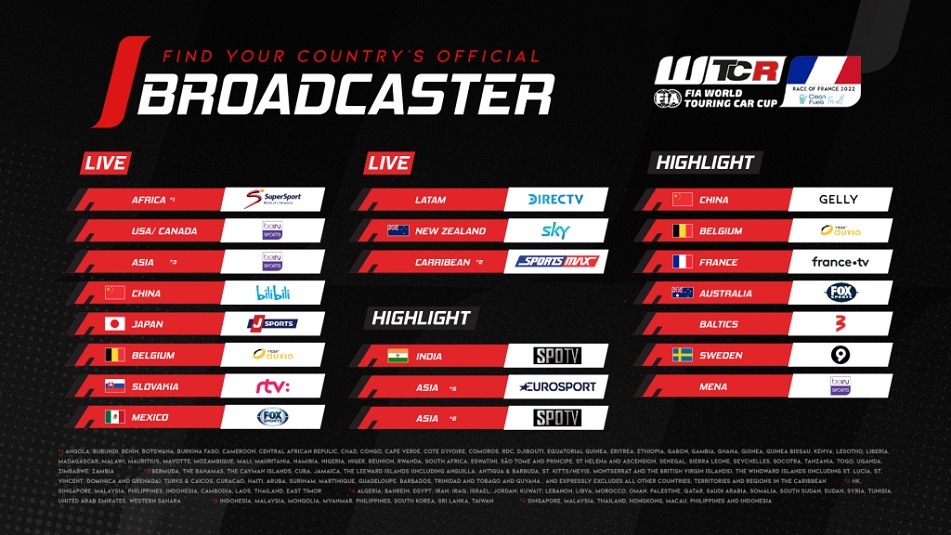 Figure represents a 23-country increase compared to the 2021 season

Bilibili is the new home of WTCR in China, DirecTV will broadcast WTCR in South America

The Caribbean becomes latest region to show action from the WTCR

Action from the 2022 WTCR − FIA World Touring Car Cup will be broadcast in 185 countries either live or delayed, promoter Discovery Sports Events is delighted to announce.

Agreements have been concluded with 22 global broadcasters in Africa, Asia, Europe, Middle East, Oceania, North America and South America with 15 planning to cover races live. The agreements are in addition to Eurosport’s long-term commitment to providing extensive coverage of the series and represent an increase compared to 2021 when the WTCR was broadcast in 162 countries.

Among several new broadcast partnerships for 2022, Bilibili is the new home of WTCR in China, while DirecTV will broadcast WTCR in South America. Elsewhere, fans in the Caribbean can watch the WTCR for the first time following an alliance with SportsMax. A summary of the broadcast arrangements for the 2022 WTCR season appears below:

Africa: LIVE on Supersports in Africa

North America: LIVE coverage and highlights on beIN Sports in USA and Canada

Jean-Baptiste Ley, WTCR Director, Discovery Sports Events, said: “The fact that the WTCR will be broadcast in 185 countries in 2022, including considerable live coverage on Eurosport and 22 broadcasters around the world is fantastic for the series and all its stakeholders, but also great for the fans. But it also demonstrates the huge, ongoing promotional push and commitment behind the WTCR from Discovery Sports Events. With a high-level driver line-up and now a strong list of global broadcasters, the WTCR is shaping up for another excellent season.”