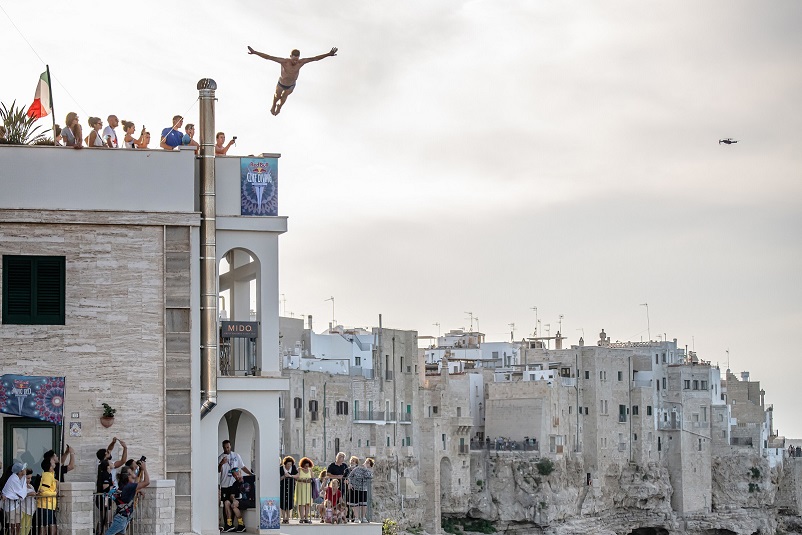 The reigning champions win in Italy and will lay their hands on the King Kahekili Trophy
once again at the final stop in Polignano a Mare this weekend.

On a weather-affected final day in Puglia, Gary Hunt and Rhiannan Iffland successfully
defended their Red Bull Cliff Diving World Series titles with victory at the penultimate
stop of the 2021 season.

Despite deteriorating conditions forcing competition organisers to condense the format to just three rounds rather than the usual four, it was business as usual for the two champions as they overcame high winds and crashing waves to extend their reign at the top of the sport with one stop to spare.

Iffland, who arrived in Italy on the back of 11 straight victories across three seasons, knew that a top five finish in Puglia would be enough to seal the deal, and there were no signs of the Australian taking her foot off the pedal as she edged past Canada’s Jessica Macaulay to take the victory and her fifth King Kahekili Trophy.

“I’m super proud,” said Iffland after her win. “I put a little bit of extra pressure on me knowing that I could take the title today. With the conditions as challenging as they were, I shouldn’t have done so, but I’m so happy, so stoked. I can breathe easily now going into the last event of the season. Now I’m really excited for that one to just enjoy it.

“It’s going to be a tough second event here. Back-to-back competitions is not something that we’ve done. My approach coming into these two events was to kind of separate them and just play the game the way I usually do. This is still what I’m going to do.”

Joining Iffland and Macaulay on the podium in third place was another Canadian, wildcard
Molly Carlson, who continued her impressive debut season with another accomplished
performance from the 21m platform.

In the men’s competition, Hunt had declared earlier in the week that he was determined to
wrap things up at this stop, and the Frenchman duly delivered another victory to secure his
ninth King Kahekili Trophy in 12 seasons.

“After the first stop this year, I knew it was going to be very tough; everyone was looking really sharp,” said Hunt.

“I’m proud of myself to have battled through and stayed consistent throughout the Series. I really didn’t want to live through another four days of pressure, so it’s a pleasure now and I’m going to be up for a really good show with a little bit of less stress in the next couple of days.”

Hunt was joined on the podium by his closest rivals this season, Romanians Constantin
Popovici and Catalin Preda who finished in second and third place respectively from almost
three times the Olympic platform height.

The cliff diving elite, who on Tuesday had completed their second round dive directly off the rooftop and balcony of a private residence at this unique Puglia stop, will now remain in
Polignano a Mare for the season’s grand finale this coming weekend.

The titles may have been decided, but there is plenty still to play for as the fight for qualification to the 2022 World Series continues at the home of European cliff diving.