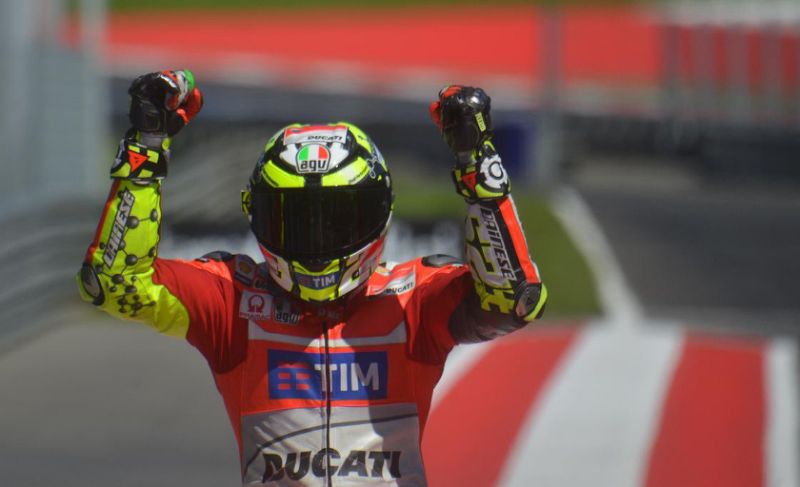 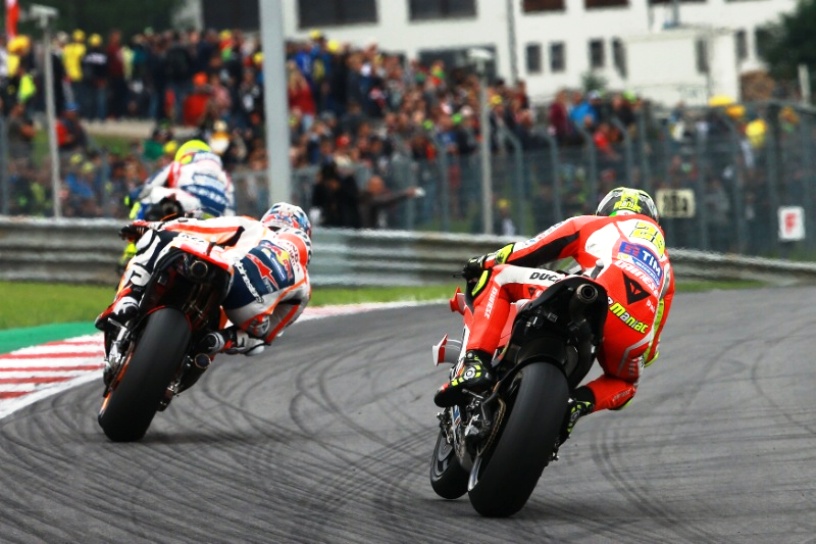 Andrea Iannone claimed his maiden MotoGP victory in the Austrian Grand Prix on Sunday, giving Ducati their first win since 2010.

Iannone started from pole at the Red Bull Ring circuit, and despite losing the lead temporarily to team-mate Andrea Dovizioso, hit the front again in the closing stages and held on with ease.

Italian team Ducati had last tasted success when Casey Stoner won in Australia almost six years ago, but they were the fastest team all week as MotoGP returned to Austria for the first time since 1997.

“It’s an incredible feeling. It’s very difficult to explain these emotions,” said Iannone, who will be replaced at Ducati by defending world champion Jorge Lorenzo at the end of the season.

“My first victory in this class with Ducati, with this incredible group. They support me from the beginning.

“At the end of this season I finish my contract with Ducati but this is a very good present – the best way.”

Yamaha rider Lorenzo completed the podium in third behind Dovizioso to cut the gap in the drivers’ standings behind championship leader Marc Marquez to 43 points.

“I thought Iannone was not fast enough early on, but then he got faster and faster,” Lorenzo said.

“This track was better for them (Ducati).”

Italian Iannone had edged out Valentino Rossi in an exciting qualifying session on Saturday, but lost the lead to the nine-time world champion at the last corner of the opening lap.

Rossi paid the price for running wide seconds later, seeing Iannone and Dovizioso storm past him, with Lorenzo also taking advantage to move into the top three.

A surge of pace in the middle of the race gave Dovizioso the chance to pass his compatriot, which he took with aplomb, but the 27-year-old Iannone re-took the lead with eight laps remanining.

From there he never looked back, punching the air in celebration as he safely negotiated the final corner.

The Ducati team were joined in their celebrations in the pits by former riders Stoner and Rossi, who is now with Yamaha and ended up fourth on Sunday.

Dovizioso made it a one-two, but was disappointed not to be the man to end his team’s drought.

“I’m disappointed because the bike was perfect. But I didn’t have the grip at the end,” he said.

“I pushed to try to be close in braking because I was stronger there and I could overtake him, but I could not get close enough.”

Four-time world champion Marquez had extended his overall lead by winning in Germany in the last race before the mid-season break, and he had a scare in practice on Saturday with a heavy crash.

But the Honda rider responded well to finish fifth and stay in control of the title race.

Earlier on Sunday, defending champion Johann Zarco claimed his fifth win of the Moto2 season to extend his overall lead to 34 points from Alex Rins.

Spanish teenager Joan Mir came out on top in the Moto3 race, edging out runaway championship leader Brad Binder to take his first victory in the class. – Agence France-Presse