Home 2020 In-form Hatton fires brilliant 65 for first round lead at the CJ... 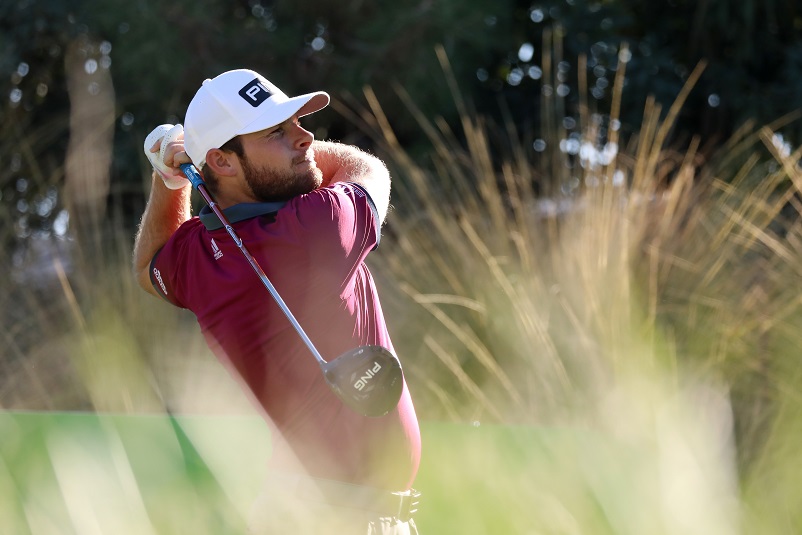 A jetlagged Tyrrell Hatton rode on his rich vein of form to shoot a dreamy 7-under 65 for a one-shot lead after the first round of THE CJ CUP @ SHADOW CREEK on Thursday.

A day after turning 29, the Englishman enjoyed his lowest opening score on the PGA TOUR, thanks largely to an outward 30 highlighted by a stunning eagle two on the 12th when he holed out from the fairway. It is also the first time Hatton has led an opening round on TOUR.

American star Xander Schauffele, a four-time PGA TOUR winner, and Russell Henley carded 66s to lie one back in the US$9.75 million showpiece, which was moved from its home base in Korea to Shadow Creek in Vegas this year. World No. 2 Jon Rahm and Tyler Duncan were a further stroke adrift while defending champion Justin Thomas opened with a 72.

It was a mixed bag for two-time FedExCup winner Rory McIlroy and 2018 tournament winner Brooks Koepka as they settled for a 73 and 74 respectively while Si Woo Kim, the 2017 PLAYERS champion, emerged as the leading Korean following a 69 in a tournament stacked with 25 players from the top-30 of last season’s FedExCup standings and six from the world’s top-10.

Hatton was victorious on Sunday when he picked up his fifth European Tour title at the BMW PGA Championship in the U.K. and despite fighting jetlag, he produced enough fireworks to put himself in position for a second PGA TOUR victory after enjoying a career-best year in the 2019-20 Season where he finished seventh in the FedExCup standings. He finished T6 and T14 in THE CJ CUP in Korea in 2019 and 2018.

“Almost like I was in a dream,” said Hatton, winner of the Arnold Palmer Invitational presented by Masters in March. “Five under through five I think we were, which holing out on the third hole, the actual 12th, but that’s a bonus from 87 yards. It was nice to have momentum early. I imagine it would have been a lot tougher round if being as tired as I was we didn’t quite have that momentum. To shoot that score today, I’m really happy. I just need to try and get back to the hotel this evening, have a good rest and hopefully sleep better than I did last night.”

Straight-shooting Schauffele has felt comfortable at the highly acclaimed Shadow Creek, a Tom Fazio masterpiece as his home course in San Diego, the Grand Golf Club, is also a Fazio design. He shot seven birdies against a lone bogey. “There is a level of comfort that I feel on certain tee shots and on the greens, too. They’re kind of trickier than people think. It took me a while to figure those out at home and hoping that that’ll help me here,” he said.

After finished tied for second in the FedExCup final standings and fifth at the U.S. Open last month, the 26-year-old put away his clubs to recharge the batteries and was delighted to come out firing. “Took about 10 days off, I had three weeks off, so started practicing shortly after that. Didn’t feel too rusty. A few chips and a few moments out here I did, a couple mental mistakes, but definitely happy with the 6 under,” he said.

Rahm, who won twice last season, snared seven birdies against two bogeys as he got his THE CJ CUP debut off to an impressive start. The only challenge he faced in was not having the right-size gloves in his bag to start the day. “Played solid out there, played really good, strong off the tee. I think I’m really pleased with the stretch of holes on 18, 1 and 2. I gave myself chances,” said the long-hitting Spaniard. “I had the wrong size (gloves). Things happen. And the one I threw away was just a little too dry, so I was losing grip in the hand. On the turn we were able to get one that was my size.”

Kim, a two-time PGA TOUR winner, stood out as the leading Korean after a 69 but the 25-year-old was disappointed to drop a shot on his last after finding the greenside trap and needing three more shots to get into the hole. “Overall I played well. I ended with a bogey on the last, which could have been better, but I think if I keep playing the way I, I think I’ll have a good result,” he said.