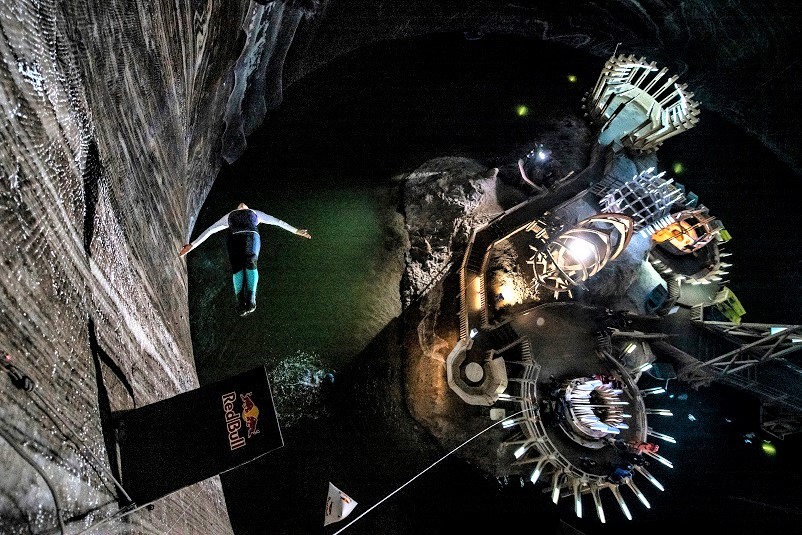 In a never-done-before feat, cliff diving’s female favorite Rhiannan Iffland with her diving partner and local hero Constantin Popovici, pushed the boundaries of high diving to the next level as they leaped from the walls of the cone-shaped mining room into the underground high-salinity lake in the depths of Transylvania.

120m under the surface of the Earth and surrounded by a science fiction-like wonderland shaped by salt and humankind, the athletes’ bodies were decelerated from 85km/h to zero in almost twice the usual speed due to the water’s high density.

From this extraordinary experience, the duo are looking forward to the return of competition in the 2021 Red Bull Cliff Diving World Series.

While mining in this huge underground bell stopped in 1880 and the salt mine was turned into a spectacular tourist destination in more recent years, cliff diving was added to the attractions only in 2020.

“We ticked a ‘world’s first’ box today: the first-ever underground dive into a salt mine. It’s very dark down in the lake. The water is 17% denser than seawater, so the impact is different. It’s actually quite a unique experience to hit the water when it’s that salty. It just pushes you straight up to the surface,” the 29-year-old Australian explained.

“The most challenging thing for me was to get my mind into gear after this special year. It was really hard to set myself back into the place that I was last year to be able to just block those fears out and to go up there and dive straight away.”

The water and air temperature of 12ºC was a rather trivial part as diving into high salinity water comes with a greater buoyant force and a much faster deceleration of the body during the landing phase.

With an 8-times higher salinity than the Adriatic Sea – 260g/l vs. 33g/l – the divers came to a complete standstill just 2½m below the water surface, compared to the regular 5m when diving from up to 27m.

This extra element imposed on the athletes’ fitness came with the challenging condition of diving without any natural light.

“Being in a cave it’s totally dark, we have lights but it’s still not a natural perfect setting to dive, so that’s a very challenging situation. Standing on the platform you almost touched the wall with your head or hands, so it’s a bit challenging to push and dive into the right spot to avoid the shallow water – it’s the most outstanding and mentally demanding project I’ve done in my life,” said Bucharest-native Popovici.

“I am really proud to be the first Romanian cliff diving in Romania. We never had the opportunity, and I am really excited it’s in this iconic place in this region of Transylvania; I have been in this mine before and it’s a once-in-a-lifetime chance.”

The first documented reference of the visually stunning location of the Turda Salt Mine in the middle of one of Romania’s oldest settlements dates back to 1271 and was the main source of supply until mining work ceased in 1932.

Today a veritable history museum and an underground theme park, the mine attracts 700 000 visitors per year.

For the fans of the Red Bull Cliff Diving World Series, as well as its protagonists like Iffland and Popovici, the return of competition in 2021 is eagerly expected.

Considering the current health and safety aspects, a calendar is expected to be announced early next year.

A women’s World Series was launched in 2014; equal standards apply for the women and men: an equal number of athletes, the same competition format and prize money.