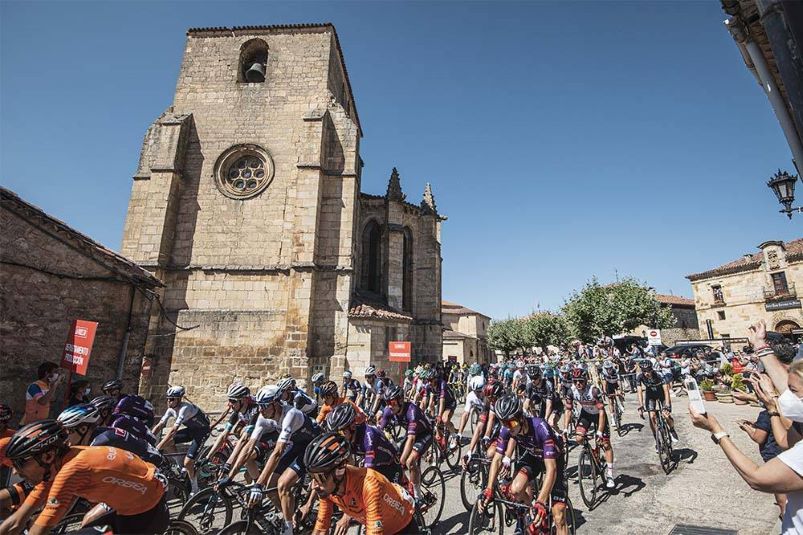 The Estonian baroudeur surged to victory from the breakaway on stage 3 and also took La Roja on these gruelling slopes. Enric Mas (Movistar Team) gained a few seconds on the rest of the GC contenders but Primoz Roglic (Jumbo-Visma) stays ahead of his rivals on the eve of a flat stage 4.

Tension ahead of Picon Blanco

The gap is already up to 5’05’’ as Kenny Elissonde (Trek Segafredo) takes 3 KOM points atop the first climb of the day, the cat-3 Puerto del Manquillo (km 39.2). No team helps Primoz Roglic’s Jumbo Visma. The breakaway enjoy the opportunity to bring their lead up to 9’05’’ and the peloton still trail by 8’20’’ as the race enters the final 50km of the day, with the mighty Picon Blanco looming at the end of the stage.

The attackers first need to overcome the Alto de Bocos (cat-3). At the summit, Bayer takes 3 KOM points and 3 bonus seconds as well. Mikel Landa’s Bahrain Victorious up the pace on the climb and the gap decreases to 4’25’’.

Calmejane attacks his breakaway companions inside the last 15km. The Frenchman is 14’’ ahead of his chasers as he hits the first slopes up Picon Blanco (cat-1): 7.6km with an average gradient of 9.3% and a maximum of 18% on the final slopes! The peloton trail by 3’30’’.

Calmejane is reeled in with 6.5km to go. He tries again but it’s Dombrowski’s acceleration within the last 5km that makes a proper difference, with only Taaramäe and Elissonde able to follow him. Taaramäe counter-attacks with 2.5km to go and eventually wins 21’’ ahead of Dombrowski.

Among the GC contenders, David de la Cruz (UAE Team Emirates) and Adam Yates (Ineos Grenadiers) try to shake things up a few times inside the last 3km. Richard Carapaz (Ineos Grenadiers) is the main victim of these accelerations. Enric Mas (Movistar Team) eventually finishes 3’’ ahead of his rivals. – www.lavuelta.es