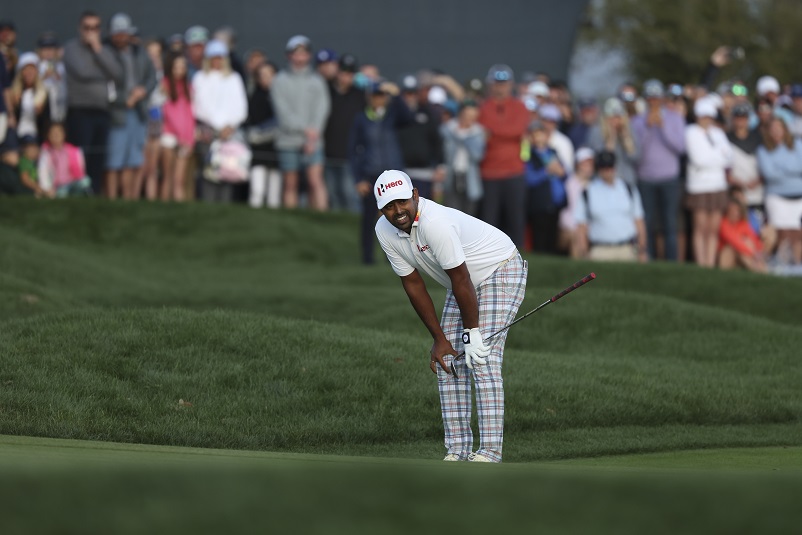 Lahiri grabbed a one-shot lead into the final round at TPC Sawgrass in the PGA TOUR’s flagship US$20 million tournament but a closing 3-under 69 saw him finish one shy of Smith, who secured his fifth career victory and second of the season with a superb 66 and a winning total of 13-under 275.

It was the 34-year-old’s second career runner-up finish following the 2017 Memorial Tournament and pushed him up to 45th position on the FedExCup after picking up 330 points. Lahiri also earned a staggering US$2.18 million in prize money, his career best.

“I want to win. I’ve been here seven years; haven’t gotten over the line yet. That’s definitely a monkey I want to get off my back. Today was as good an opportunity as any,” said a disappointed Lahiri, who was bidding to become the second Indian after Arjun Atwal to win on the PGA TOUR.

Smith was superb all day with 10 birdies against three bogeys through 17 holes but opened the door with what turned out to be a winning bogey after finding water on the 18th hole with his second shot. After making a double bogey on the par 3 8th hole, Lahiri fought back with a 14-foot eagle conversation on 11 and a gutsy 13-foot birdie on the famous par 3 17th hole to stay in the title frame. Needing a birdie on 18 to force a playoff, he blocked his approach shot to miss the green and then left his chip short of the flag to force extra time.

“I guess at one point on 16, I thought it was kind of out of reach, but then again, birdieing 17, Cam kind of opened the door. I gave it a good go. Made some mistakes that I could have avoided, but that’s golf. I picked up a few shot too, so I’m happy. This is a really positive week for me going forward,” said Lahiri.

“I hit such a good drive (on 18). The ball was above my feet, which is like a hook or a draw lie. It was pretty simple really and I just needed to stand pretty much where my ball ended up, stand there and just make a swing and let the slope and the wind do the job for me. Like a few other things today, I didn’t turn through it, and I kind of hung it out a little bit and it didn’t come back. That was disappointing, because I couldn’t have put myself in a better position to actually.”

Although his final approach shot failed to find the green, one area of improvement which Lahiri was extremely pleased about was his iron play, which saw him ranked 13th in Strokes Gained: Approach the Green at THE PLAYERS.  “I’m just relieved. I’ve gone through two years of playing horrible. The last time I contended in a field this good was at Memorial maybe, five years ago, or even that was a back-door second. I shot 7-under on Sunday. It’s been a long time since I’ve been in this position in a quality field like this,” he said.

“It’s huge, because when you go through such a lean period for such a long time, you start asking yourself, man, was that a flash in the pan? What are you doing? You haven’t played good in so long. Your belief takes a hit, so this for me is — I’m going to re-cement the foundation and work upwards from here.

“Two weeks ago, Honda Classic week, strokes gained off the tee was 29th, around the green 4th, putting 15th, 144th approach to green. My only goal coming in was to change that, and I did. It was a very successful week,” added the Indian star, who added 3.5 grams of weight to his irons at the start of the week.