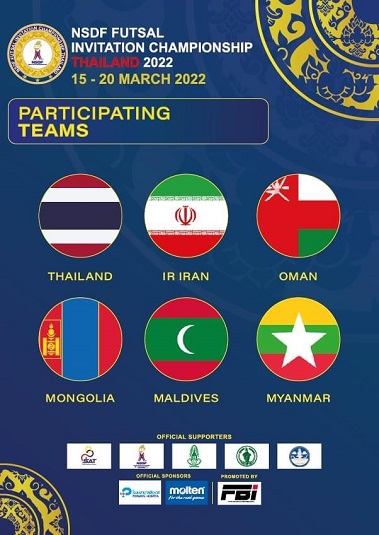 Iran and host Thailand stayed true to form to pick up the full points on the first day of the NSDF Futsal Invitation earlier today at the Show DC Hall in Bangkok.

In the opening match of the qualifiers, Iran smashed Mongolia 8-0 as Thailand then overwhelmed Maldives 8-3 in the second game of the day.

Iran took some time to warm up before Mojtaba Parsapour nailed the opening goal in the 14th minute.

From then on, Iran never looked back as they raced to a 4-0 lead at the break, off goals from Amir Hossein Dehghanibangoodi (15th), Mohammad Hossein Bazyar (15th) and Amir Hossein Gholami (19th).

Mehdi Mehdikhani (22nd) then followed it up alongside Belal Esmaeili Kooraneh (24th), Gholami (30th) and Mohammad Taheri (37th) for the well-deserved victory.

On the other hand, Thailand could not keep a clean sheet when they afforded an 8-3 win over the Maldives.

After going in front early in the sixth minute through Supakorn Bovonratcadakul, the Thais allowed the Maldives to get back into the game when Ishan Ibrahim slotted in the equaliser a minute later.

Peerapat Kaewwilai then restored Thailand’s lead in the ninth before Hussain Sharif once again drew level for the Maldives five minutes later.

But Thailand would end the first half on 4-2 advantage off goals from Apiwat Chaemcharoen (17th) and then an own goal from Maldives’ Mohamed Imran (18th).

Two quick goals from Atsadawut Jangkot (20th and 21st minute) set Thailand well on the way into the second half to be followed by goals from Tanatip Sangsung (28th) and Peerapat (37th).

Maldives’ third goal of the game came off Huzaifath Rasheed a minute to the end.