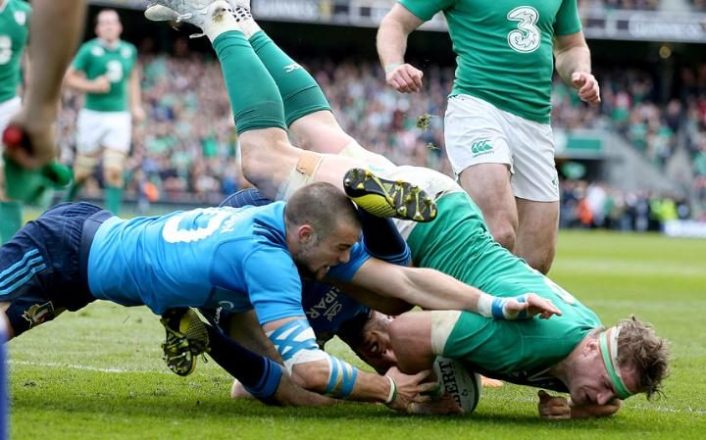 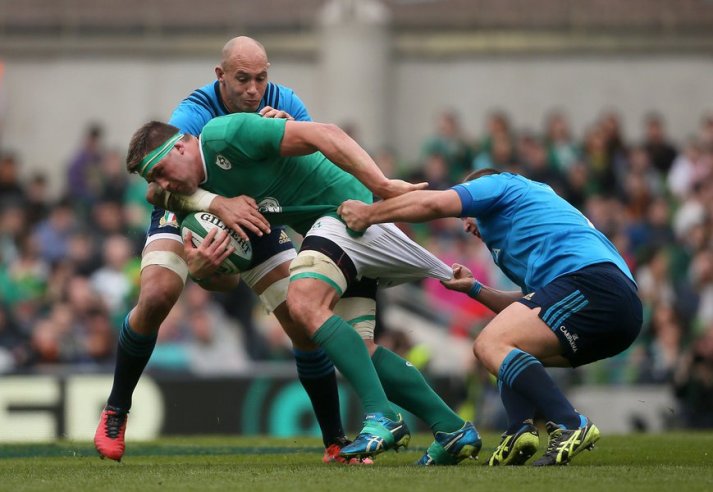 Ireland made light work of a pitiful Italy side at Lansdowne Road on Saturday to earn their first Six Nations victory of the year with a nine-try rout of Jacque Brunel’s side.

Joe Schmidt’s men finally got the win they so desired, after taking just one point from their opening three games against Wales, France and England, but whether this is a turning point for Ireland, or Italy, is hard to say.

Ireland had scored two tries in their opening three games, but had four by half time in Dublin and added another five after the restart to score nine tries in a Six Nations match for the first time.

Andrew Trimble, Jack McGrath, CJ Stander and Jamie Heaslip all crossed the line in the opening 40 minutes, with just Edoardo Padovani’s penalty for the Italians to cheer.

Then Jared Payne, Heaslip again, Sean Cronin, Ian Madigan and Fergus McFadden dotted down in the second half, with David Odiete and Leonardo Sarto getting consolation scores for the visitors.

Ireland were under huge pressure to record a first win of the tournament, having let victory slip through their fingers in the opening three games but with eight home wins from eight against Italy in the Six Nations, Brunel’s men were the ideal opposition.

Not only did the Italians come to Dublin without a single point, they were missing a handful of players, including their first choice halfback pairing, and lost experienced prop Lorenzo Cittadini in the warm up.

Despite this, the Italians began the game on the front foot, with a late tackle from Conor Murray pushing Gonzalo Garcia into touch with the tryline inches away.

But on Ireland’s first attack, they scored -– and so began the one-way traffic to the tryline.

Payne pounced when Sarto mucked up a basketball-style backpass, and three passes later Trimble was strolling over for his 17th Ireland try.

Minutes later McGrath powered home from close range to score what was Ireland’s 200th Six Nations try, and as the half-hour mark approached, Stander shoved home for his first.

It was all too easy for the hosts, and their fourth summed up the sheer confidence and enjoyment they were taking from the game.

Starting inside their own 22, no fewer than nine Irish players had their hands on the ball before Heaslip, of all people, rounded off a fantastic flowing move.

It didn’t get any better for Italy in the second half, with Ireland’s fifth try coming inside three minutes when Payne intercepted Padovani’s awful pass and strolled home under the posts.

Heaslip added his second six minutes later from close range, and then Sean Cronin — only on the pitch a matter of seconds — touched down on his 50th cap.

Odiete punched a hole in the Irish defence from close range to give the visiting fans something to cheer, but unfortunately for the Italians there were still 20 minutes to go.

Madigan cut through the Italian backline to bag try number eight, and though Sarto dotted down with five minutes to go, Ireland still had the final word with McFadden splitting the defence to put the hosts on cloud nine. – Agence France-Presse