Home 2022 It’s advantage USA and Portugal in race for final ticket to France... 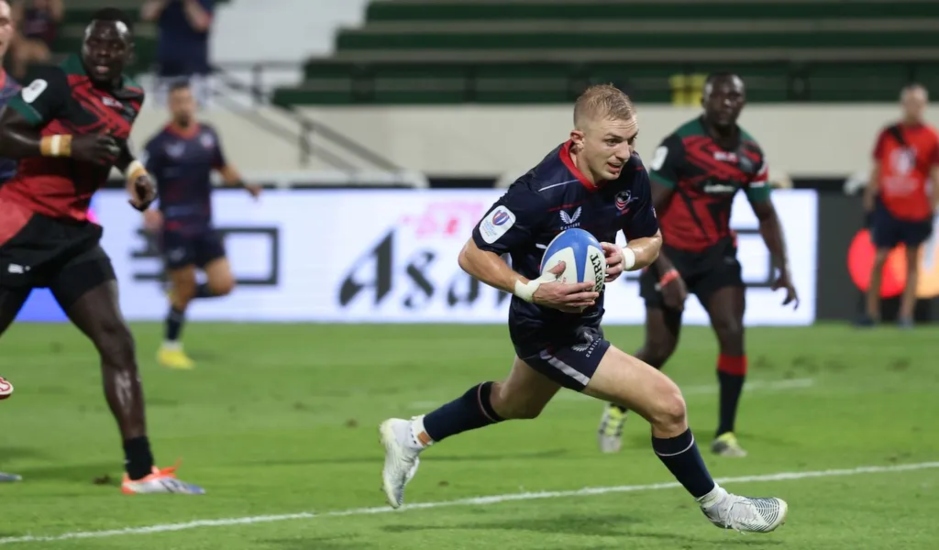 USA lead the Final Qualification Tournament table on points difference from Portugal after both teams picked up bonus-point wins in the first round of matches at The Sevens Stadium in Dubai.

There has only ever been one Rugby World Cup without the USA present, in South Africa in 1995, and the current crop of Eagles showed their determination not to miss out again with a 68-14 win over an outgunned Kenya.

Meanwhile, Portugal displayed some of the brilliant attacking rugby they are renowned for in beating a determined Hong Kong 42-14.

Os Lobos are looking to qualify for a Rugby World Cup for the first time since 2007 and some of their rugby wouldn’t have looked out of place on the HSBC World Rugby Sevens Series which is coming to Dubai at the start of December.

The winners of the round-robin Final Qualification Tournament will claim the 20th and final ticket to Rugby World Cup 2023 and take their place in Pool C alongside Wales, Australia, Fiji and Georgia.

The action resumes on Saturday 12 November with Portugal up against Kenya in the first match of the day before the USA face Hong Kong in the latter of the two kick-offs.

Hooker Dylan Fawsitt and winger Christian Dyer both scored hat-tricks as the USA won their first-ever meeting with Kenya.

The Eagles scored 10 tries in total and racked up their highest-ever score outside of the Americas in a largely one-sided encounter.

An early yellow card to second-row Siaosi Mahoni and poor moments of execution inside the Kenya 22 did not make for the most auspicious of starts by the Eagles in the Dubai sunshine.

Increasingly the Eagles turned to the set-piece and their dominance in that area, especially at lineout time, eventually told as they laboured to a 19-0 half-time lead.

With the free-scoring Joe Taufeteʻe still unavailable to the Eagles, Fawsitt was given a rare chance to start by head coach Gary Gold and he took his opportunity with both hands, the 32-year-old peeling away from a lineout for his first before touching down for a second time from the back of a rolling maul.

Shortly after Kenya winger Geofrey Okwach returned from the sin-bin, industrious number eight Jamason Fa’anana-Schultz added a third for the Eagles, which was just reward for his efforts after a previous effort had been disallowed for a double movement.

Fawsitt and the Eagles maintained the route one approach at the start of the second half, and after a couple of near-misses, the tactic paid dividends again with the hooker bringing up his hat-trick and the Eagles’ bonus point try, on 48 minutes, from another lineout play.

With Jack Carty slotting three conversions on the bounce after a failed first attempt, the USA led 26-0.

By now the USA were full of running and Dyer jinked over for their fifth on 51 minutes, Carty converting for a fourth time.

Feeling the pressure, Kenya brought on some fresh legs and a huge carry from replacement prop Andrew Siminyu led to a try for Brian Juma.

At last, the vocal Kenya fans had something to cheer about, but it did not take long for USA to retake control and they reeled off three tries in six minutes.

Nate Augspurger scored the Eagles’ sixth try before Dyer finished of a fine team try and then another to complete his hat-trick.

USA returned to their maul to provide replacement hooker Mike Sosene Feagai with his maiden test try and Mitch Wilson joined him in opening up his account on 76 minutes.

Replacement kicker AJ MacGinty had knocked over his four previous attempts and added a fifth to rack up 10 points in 16 minutes.

Kenya had been thoroughly outplayed but they showed what they can do when they do get some possession in space when winger Joshua Weru collected a lovely pass from Martin Owilah and galloped home unopposed, Darwin Mukidza converting for the second time in the match.

USA man of the match Dylan Fawsitt said: “Kenya brought it to us at the start and frustrated us a bit, it was what we wanted to do to them, so credit to them. But we came together and I am proud of how the boys reacted. We got the result we wanted.”

Portugal produced moments of attacking brilliance to overcome stubborn resistance from Hong Kong and keep their bid to qualify for Rugby World Cup 2023 firmly on track.

Hong Kong started out on top and deservedly took the lead on seven minutes when Alexander Post became the latest hooker to plunder a try from the back of a rolling maul.

Gregor McNeish, the hero of the nail-biting win over Korea earlier in the qualification process, added the conversion to make the scoreline 7-0 in favour of the Asian champions.

This Portuguese side though do not lack heart or bravery and it didn’t take them long to find a response, second-row José Madeira galloping over from 25 metres out after his show-and-go opened up a hole in the Hong Kong defence.

With their tails now up, Portugal added a second try five minutes later from a first-phase strike move from just inside their own half.

Having won quality off-the-top lineout ball, Portugal spread play to midfield where Tomás Appleton broke the line and found in-form winger Raffaele Storti on his shoulder. With a clear field in front of him, there was no stopping the pacey Storti, a star of the Portugal U20 side that reached the final of the World Rugby U20 Trophy in 2019.

If that try was good, the third was even better. Brilliant interplay from Rodrigo Marta and José Lima opened up Hong Kong and Miguel Morais was on hand to finish off the counterattack.

With Samuel Marques putting an earlier penalty miss behind him to slot his third conversion, all of a sudden Portugal were 21-7 up.

Hong Kong did not capitulate in spite of the onslaught and dominated the final five minutes of the half. As they came under increased pressure in the shadow of their posts, Portugal were forced to concede a handful of penalties and they lost João Granate to the sin-bin as a result.

However, the 14 men of Portugal defended valiantly, showing they can play with their backs against the wall as well as on the front foot, and maintained their 14-point lead going into the break.

There was no let-up from Portugal in the second half and their instinctive attacking play was a joy to watch.

Within the first 10 minutes of the restart, the sensational Storti set one up for Marta and then scored a second, after a Nuno Sousa Guedes break.

By now every Portugal player was desperate to get in on the act and Lima was the next to benefit from some slick handling. Marques made it six from seven from the tee to take the score to 42-7.

Credit to Hong Kong, their spirit never wavered and good work from the forwards enabled Jack Neville to hit the line at pace and muscle his way over, taking three Portuguese defenders with him for a try that McNeish converted.

At this stage, Portugal had started to unload their bench with two-try Storti one of the players to be removed.

Even so, they remained an attacking threat and only some stoic defending and a glaring missed try-scoring opportunity when Thibault de Freitas dropped a pass with no one around him prevented Os Lobos from adding to their tally.

Duarte Torgal became the second Portugal player to be sin-binned late on but that didn’t take anything away from an impressive performance from Os Lobos.

Player of the Match Raffaele Storti said: “Our backline is strong, it has improved a lot since we came together three years ago. But our forwards are good as well. They give the structure for the backs to play.”