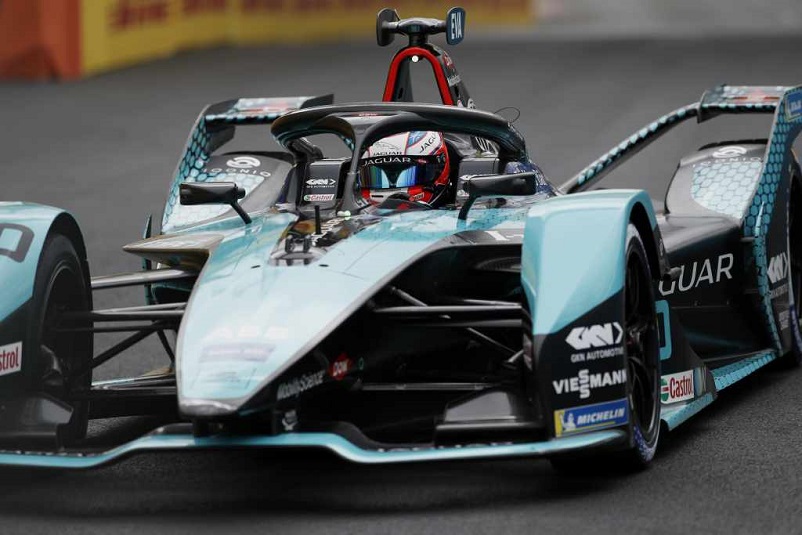 Mitch Evans set the fastest lap at the Heineken London E-Prix, showing the pace of the Jaguar I-TYPE 5 after pitting to replace his damaged nosecone

Jaguar Racing driver, Mitch Evans, secured fastest lap today as the British team look ahead to tomorrow after a challenging start to the double-header race weekend at the Heineken London E-Prix.

Mitch Evans started the race in eleventh and made up two positions in the first corner, moving to a potential points scoring ninth. The opening lap was unforgiving for both Jaguar drivers after they were both involved in accidents on the tight ExCel circuit. Mitch pitted for a new nosecone which sent him down to twenty-first but the team didn’t give up. He would go on to set the fastest lap of the race – proving the superior race pace of the Jaguar I-TYPE 5 – and finished the race in fourteenth.

A tough group one Qualifying session for Sam Bird resulted in him starting eighteenth on the grid. In the first lap of the race, the Jaguar I-TYPE 5 was hit from behind and the side which caused terminal front left suspension damage. The Brit was forced to retire but holds onto his championship lead by one point.

Mitch Evans moves to thirteenth in the drivers’ standings and will qualify in group three tomorrow. Jaguar Racing remain third in the teams’ standings, seven points behind DS Techeetah.

Today was not how we wanted things to play out but the positive news is we have another chance tomorrow and we’ve retained our positions in both championships. Mitch stuck at it and we’ve learned a few things for tomorrow. We know we have a fast race car, two fast drivers and a motivated team. We are looking forward to tomorrow’s race after a thorough debrief.” JAMES BARCLAY – TEAM DIRECTOR JAGUAR RACING

“Today was not ideal, I’m not completely sure what happened but ultimately there were too many people going for the same part of the track and I came out worst off. It’s frustrating but there is no major damage in the points. Time to focus on tomorrow.” SAM BIRD – #10 JAGUAR RACING DRIVER

“I had a good start to the race and made it up into the points. I had front damage, rear damage and had to go into the pits which is frustrating. After the pit stop we wanted to stay out and learn as much as we could for tomorrow. The race car was quick so we’ve got another good opportunity tomorrow.” MITCH EVANS – #20 JAGUAR RACING DRIVER