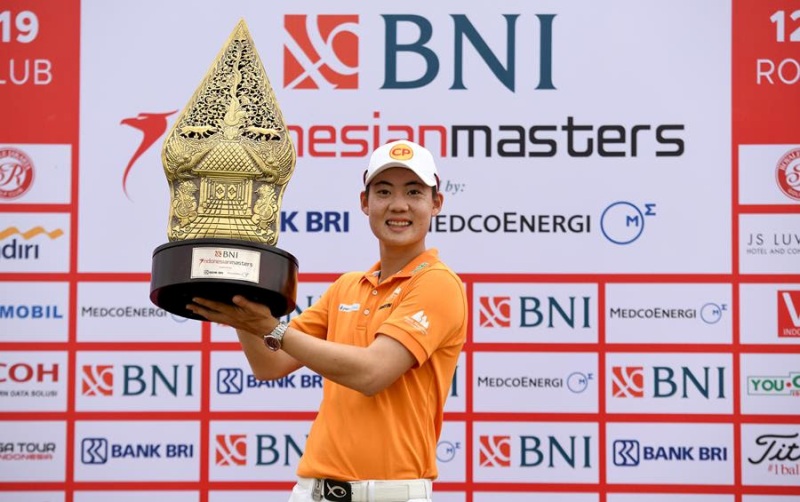 Thai rising star Jazz Janewattananond made his remarkable season even more memorable when he secured his fifth Asian Tour victory and a third one this season at the BNI Indonesian Masters supported by Bank BRI and MedcoEnergi on Sunday.

The 24-year-old Jazz, who sealed the 2019 Asian Tour Order of Merit crown last week, signed for a closing seven-under-par 65 and a four-day total of 23-under-par 265 to win by five shots over countryman Gunn Charoenkul at the Royale Jakarta Golf Club.

With a total of 20 Official World Golf Ranking (OWGR) points on offer at the BNI Indonesian Masters, which is the flagship event of the Asian Tour, Jazz is set to break into the world’s top-50 following his victory and secure a coveted berth at The Masters next April.

Starting the day with a one-shot lead, Jazz reeled in five straight pars before sinking three birdies to turn in 33. He would pull four shots clear after striking a brilliant approach shot to three feet en route to a second straight eagle on the 574-yard par-five 12th hole.

Jazz would seal the deal with three birdies against one bogey in his closing five holes to become the second Thai following Poom Saksansin to triumph in the US$750,000 event, which forms the third leg of the 2019/20 Panasonic Swing.

At the age of 24, Jazz is also the youngest player to achieve five victories on the Asian Tour. He will be the third Thai, following Thongchai Jaidee in 2009 and Kiradech Aphibarnrat in 2015, to break into the world’s top-50.

Jazz will take home a winner’s prize purse of US$135,000 and bring his season’s haul to US$968,524 and break the US$2million mark in his career earnings on the Asian Tour, where he started playing as a full member in 2012.

He has also secured a coveted berth at the World Golf Championships – FedEx St. Jude Invitational in 2020, thanks to his victory at the Indonesian showpiece, which celebrated its ninth consecutive edition on the Asian Tour this week.

Gunn posted a 69 to finish second while Korea’s Taewoo Kim and Australian Josh Younger carded respective rounds of 65 and 66 to share third place on 271. Kim and Young would break into top-60 on the Merit rankings, giving themselves a chance to secure their cards for the 2020 season.

Danny Masrin wrote a slice of history by becoming the best local finisher in the tournament. He ended his campaign in style with an eagle on the 18 to sign for a 66 and grab a share of fifth place on 273. The record was last held by Rory Hie when he finished tied-ninth in 2011.

It’s very good to to win the flagship event of the Asian tour. It’s the biggest full-field Asian Tour event of the year. All the good players and here and everyone’s trying to win. It will be a good ending to my season although I still have another tournament to go next week.

After winning in Singapore and broke into top-100, my next goal was top 50. I am really happy to achieve it this week. Maybe next goal is top-40?

I played a lot of times with Gunn, especially in Japan. He has been playing great. I know he’s going to come in strong today. I just need to play my game, you know, like yesterday. If I can kind of replicate that, I know I can win so I just try to keep calm and just putt my way through out there.

I know this golf course can bite you anytime so I didn’t let my guard down until I hit the green on the last hole.This is my best season so far. I get to play not only on the Asiain Tour but also around the world. It’s been a very fulfilling year so I am excited about what lies ahead in 2020. A lot of people say I’m going to be a busy man next year but I think this is good to be busy in golf, so I’m looking forward to it.

A lot of people asked me like how and why am I playing better now. I can’t answer it. It just got better. Everyone in my life has been helping me to this point, especially my parents, they been helping me since I was young. I’m really glad and I’ll get to see them tomorrow so I’m really happy to bring home a trophy.

It was tough. I mean, I was hitting them good but he (Jazz) was hitting it way better than I do. I mean I had a lot of mistakes but coming in with birdies too. I’m way behind ball-striking wise, putting and driving. I know why he wins.

We were on each other’s necks for like awhile, and then after that eagle he just took off. I think he found something in this game I guess, and then he was dialed in.

I’m really happy honestly, like the whole year has been very consistent, the most consistent I’ve been throughout my career. I’ve been working really hard on my game last year and I think it worked out really well. And I pretty much found something in my game.

But there’s still a lot of room for improvement to get to where Jazz is, it’s an eye candy to watch him play. I’m really looking forward to next year, I got three weeks off after Thailand Masters and I’m going to grind and hopefully I do win Singapore.

Been hitting the ball really well, the key for me has been just my tempo. I have been rolling it really well last few days, it was good to get two birdies in those first three holes there. I had to make some good saves on the front nine.

But yeah, I took advantage of the par-fives which is very important for me, playing them five-under today. And obviously, to finish the way I did is always nice. I hit a big drive, hit a five iron there to about six feet and made eagle. I had to 229 yards to the pin.

Everyone kept telling me at the beginning of the week that I’m safe to keep my card, but I kind of want to make sure I can get into that top 40 or top 45 to really confirm a few more playing rights so I don’t have to wait last minute to get in. So hopefully this does the job for me.

Scores after round 4 of the BNI Indonesian Masters being played at the par 72, 7368 Yards Royale Jakarta GC course (am – denotes amateur):