Home Football JDT win in Larkin, while Pahang get their revenge over Felda 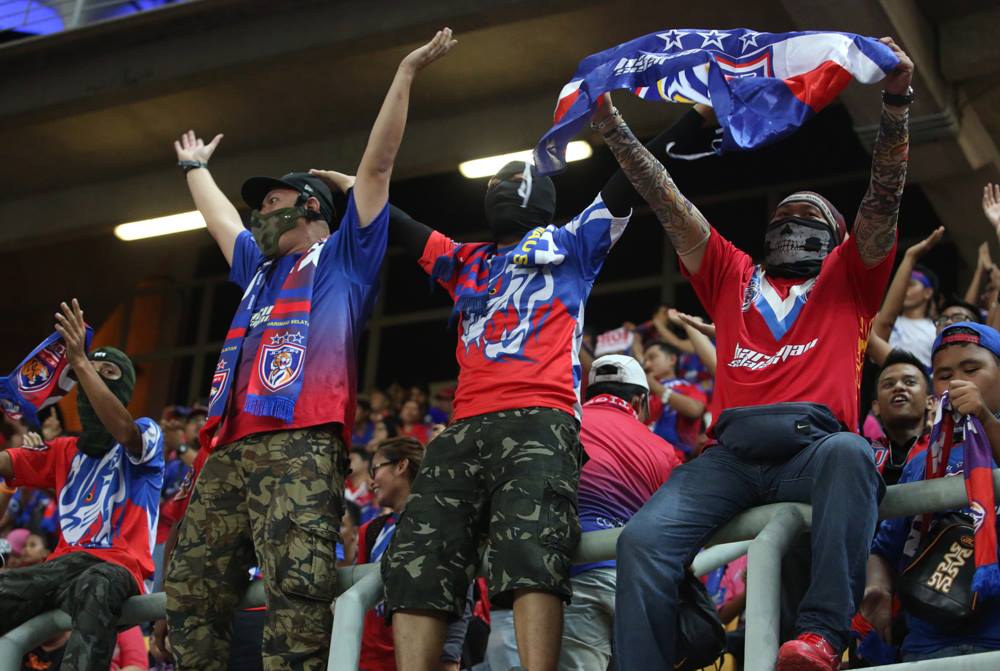 In a night of surprises Armed Forces came back from the brink of defeat with a come-from-behind 2-1 win over Kelantan in Kota Bahru while Super League champions Johor Darul Takzim put up a classy performance before their home fans with a 5-0 rout of Penang, Pahang exacted sweet revenge over Felda United with a 2-0 win at Selayang and JDT II virtually showed Lions XII the Malaysia Cup exit with a 2-2 draw at the Jalan Besar Stadium in Singapore on Tuesday.But what was seen at the Sultan Mohd IV Stadium in Kota Bahru once again showed what B. Sathianathan and company are made up of as they stayed alive in Group C – with a come-from-behind 2-1 win over the Red Warriors. And the hero was none other skipper Hairuddin Omar who plundered the winning goal in 85th minute with a jumping dipping header into the far corner.And it was a remarkable effort from the Terengganu-born former international who was playing with a bandaged head which left him with a deep cut following a clash of heads with teammate Fauzi Saari in the 60th minute. The clash left both players bleeding.. Fauzi, known as “Pak Long” among friends looked dazed with blood oozing from his mouth. However, both resumed play with Fauzi taking much longer on the sidelines. Kelantan, 3-0 winners over Armed Forces in the first round match at the Shah Alam Stadium on Saturday, looked like heading for another easy win over their opponents when Forkey Doe put the homesters in the lead after 43 minutes as the soldiers struggled – thanks to their long injury list which has kept their key players out.But the shrewd Sathianathan, never one to give up or concede defeat despite the odds, rallied his wounded soldiers and opportunist Juan Manuel Arostegui pulled one back on 77 minutes to ignite the fighting back after he beat the Kelantan offside trap. It was all they needed and the hungry visitors knew that they could not afford another defeat to keep their top two group finish alive.And “Captain Marvel” Hairuddin sealed the match when he jumped high to knock down a dipping header to send the ball into the far corner with Kelantan keeper Khairul Fahmi Che Mat caught stranded on 85 minutes.At the Larkin Stadium the Southern Tigers ripped Penang apart for their back-to-back wins over the island state. The first round match last week ended with a 3-1 win for JDT.JDT never looked back after Jorge Pereyra Diaz opened the floodgates with the first strike in the fifth minute. Luciano Figueroa scored a brace (29th and 54th) with Amri Yahyah (38th) and Hariss Harun (83rd) completing the whitewash over the Malaysia Cup pretenders.In Group A, defending champions Pahang, beaten 3-2 by Felda United at home last Saturday,gained revenge with a 2-0 win over the plantation giants with a 2-0 win with R. Gopinathan and Dickson Nwakaeme (penalty) hitting target in the 65th and 92st minutes respectively.JDT II added more misery to Fandi Ahmad’s team with a 2-2 draw to leave the Lions still without a win in the group and their Malaysia Cup  hopes are virtualy over following a scoreless draw against Felda United and 2-1 defeat to Pahang (both at home) and a 2-1 defeat to JDT II (away) in the first round.