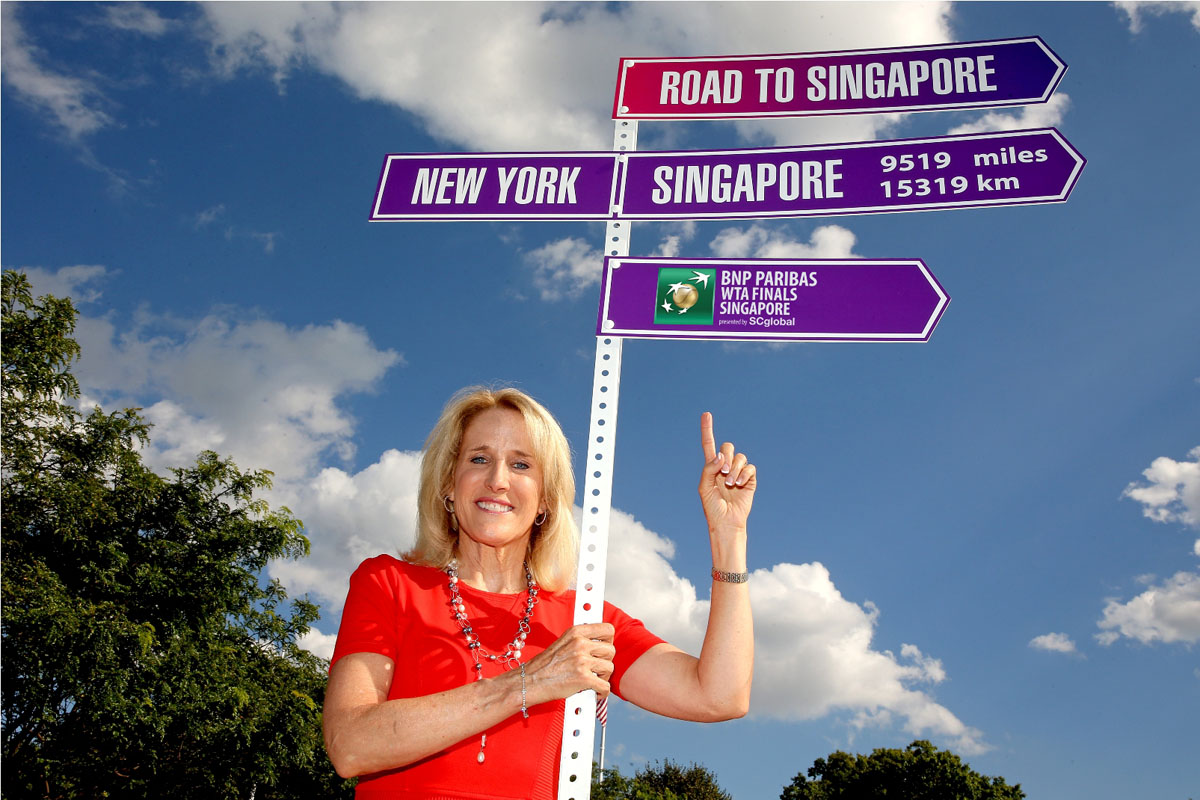 • Austin joins Martina Navratilova in 4-player field, as the 2014 WTA Finals incorporates a Legends Event for the first time
• Including the WTA Finals in 1980, Austin won 30 singles titles and was inducted into the International Tennis Hall of Fame

ST. PETERSBURG, FL, USA – The Women’s Tennis Association (WTA) announced today that former World No.1 Tracy Austin will play in the inaugural WTA Legends Event at the BNP Paribas WTA FinalsSingapore presented by SC Global. Austin joins Martina Navratilova in the four-player field, with the participation of a furthertwo legends of women’s tennis to be announced shortly.

For the first time in the 44-year history of the WTA Finals a city in Asia-Pacific will host the prestigious year-end event, which will take place during October 17-26, 2014, and through 2018. A Legends matchis scheduled for Session 1 (Monday, October 20), Session 4 (Wednesday, October 22) and Session 6 (Thursday, October 24), admission covered by the ticket price for the respective session. Over the course of the three sessions each Legend will play three best-of-three-set doubles matches in round robin, rotating partners, with the player who accumulates the most points to be crowned Legends Champion.¬¬¬

“Singapore is going to take the WTA Finals to a whole new level of spectacle and I’m so happy to be a part of it,” said Austin. “I have wonderful memories of competing in this showcase event during the exciting years at Madison Square Garden in New York. With a fascinating mix of established favorites and new faces, there is a real buzz around women’s tennis at the moment and I have no doubt the Singapore Sports Hub will provide an iconic new stage for our phenomenal athletes.”

“Tracy is one of the greatest players the game has seen and we are thrilled to welcome her to compete in the inaugural WTA Legends Event in Singapore,” said Stacey Allaster, WTA Chairman and CEO. “The Legends Event is shaping up to be another marquee component of the WTA Finals. What an incredible experience for fans on-site, and around the globe, to be able to watch these inspirational women play once again alongside the current stars of the sport. It will also be a special opportunity for the WTA’s Rising Stars, competing in another new event in the Finals program, to engage with the leaders who helped shape their tour.”

Austin won the WTA Finals in 1980, duly clinching the No.1 ranking for the first time, and was runner-up a year earlier – Navratilova being her opponent on both occasions.At Portland in 1977, at the age of 14 years 28 days, she became the first player to win a WTA title on her singles debut and the youngest-ever singles champion. In 1979, she became the youngest player to win the US Open at the age of 16 years, 9 months; she went on to win the US Open again in 1981. To this day, she remains the youngest-ever player to be inducted into the International Tennis Hall of Fame (1992, aged 29) and is a popular tennis commentator for TV stations in Australia, Canada, the United Kingdom and the United States.

Joining Austin and Navratilova in Singapore will be fellow greats Billie Jean King and Chris Evert, who have been announced as Official Ambassadors for the BNP Paribas WTA Finals Singapore presented by SC Global.

Tickets for the general public can be purchased through Sports Hub Tix, the official ticketing partner of the 2014 BNP Paribas WTA Finals Singapore presented by SC Global. For more information log on towww.sportshub.com.sg/WTAFinals, visit the Singapore Indoor Stadium Box Office, call +65 6333 5000 or +65 3158 7888, or stop by a local SingPost outlet. Ticket prices start from SGD16.90 exclusive of booking fee. A limited number of Ground Passes will be available for purchase the week of the event from October 20 to 26, 2014, granting visitors access to the Fan Festival, Fan Zone and Player Practice sessions.