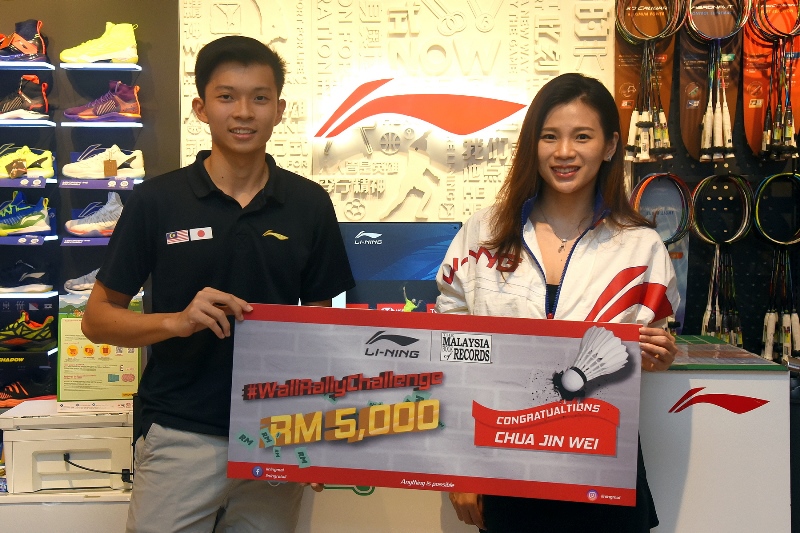 Chua Jin Wei walked away as winner of the Wall Rally Challenge with a score of 136 wall hits and received MYR 5,000 worth of cash vouchers from Li-Ning Malaysia at a prize presentation, with the presence of Malaysia’s Mixed Doubles player, Goh Liu Ying.

The Wall Rally Challenge was organized by Li-Ning’s sole distributor Malaysia, Sunlight Sports Sdn. Bhd. and Malaysia Book of Records. There were at least 151 participants in the first round of the challenge which required participants to upload a recording of their attempt on social media. Ten participants who had the most wall hits had entered the final round.

In the presence of his family, Chua Jin Wei was presented with the grand prize from Malaysia’s Mixed Doubles player, Goh Liu Ying. Chua was also interviewed live by Goh at Li-Ning Concept Store at 1Utama Shopping Centre.

Chua, who once represented KLBA said, due to the MCO, he couldn’t play badminton, so he set a target of rallying with the wall 1,000 times daily for 14 days.

“I don’t usually strive for speed in badminton, but I set this target of at least rallying 120 times in one minute after I came across this challenge by chance. I challenged myself to keep improving upon finding out I had entered the final round and who knew I rallied, 136 times”, said Chua.

Chua described that he felt pressured and nervous after the final round challenge as six finalists were not recorded live. He was a little worried and uncertain, but he was glad that he won the challenge.

Chua said that he started formal badminton training since he was 9 years old and once represented the state for interschool badminton tournaments, but unfortunately, he did not receive the opportunity to participate in the Junior National Badminton Championships. Upon graduating from high school, he rarely competed. He would only play and train on a weekly basis.

Goh Liu Ying congratulated Chua for winning the championship and jokingly suggested that Chua run classes on how to rally with a wall.