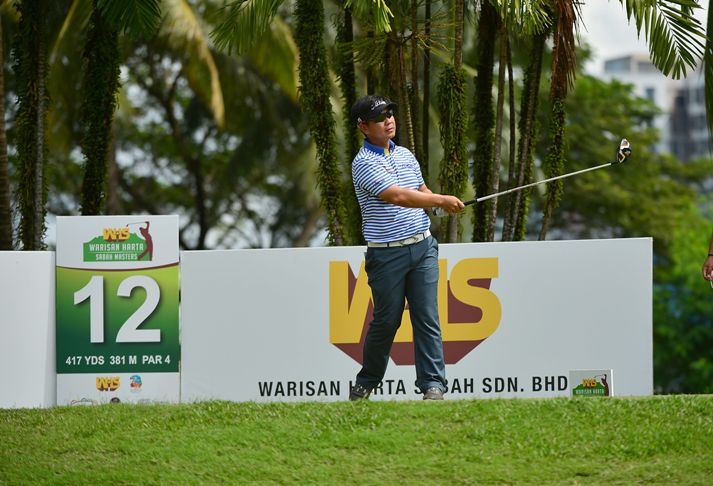 Local hope Khor Kheng Hwai set the stage alight when he carded a flawless six-under-par 65 to share the opening round lead with Thailand’s Namchok Tantipokhakul at the Warisan Harta Sabah Masters on Wednesday.

Khor, who started from the first, turned in with a splendid 31 highlighted by five birdies before adding another birdie on the last to hold a three-shot lead alongside Namchok, who recorded the tournament’s first hole-in-one when he aced the par-three fourth at the Sutera Harbour Golf & Country Club.

Title holder Mardan Mamat settled for an even-par 71 while Malaysia’s number one Danny Chia was a further shot back in the US$100,000 tournament, jointly sanctioned by the ADT and the ASEAN PGA.

Khor, who had finished inside top-three in his last two starts in 2015, is glad to bring on his good run of form into the new year.

“My ball striking on the front nine was great. All five of my birdies on the front nine came from inside five feet. I wielded my irons with a lot of confidence and despite the wind picking up on the back nine, I managed to negotiate the tougher conditions and notched another birdie at the last.

“This is my first week out and a good performance will set the tone for the season. I’m glad my game remains sharp after the holidays. My win on the local circuit in Penang last year took a lot of pressure off my shoulders and I am enjoying the grind now,” said the 31-year-old Malaysian.

With the top-three players on the final ASEAN PGA Tour Order of Merit earning a place in the Asian Tour’s US$1 million SMBC Singapore Open at the end of the month, Khor knows that a win here could propel him upwards from his current 11th placing on the money list.

“It’s a long shot but you know, it would be great to qualify and that’s the sort of event you want to play as a professional. But I’m keeping at the back of my head and just focusing on one round at a time. I’ve learnt that it’s best to keep my expectations in check and let my game do the work,” Khor added.

The 28-year-old Namchok said: “I’m very happy with how I played. I started with the round with a bogey so the hole-in-one was a pleasant surprise. I hit my eight-iron, saw it bounce and roll straight into the hole. That really perked me up and I managed to build on the good momentum after that.”

“I’m glad to be back in Sabah. I didn’t give myself any pressure. I just want to have fun this week,” added Namchok, who marked his card with an ace and six birdies against two bogeys.